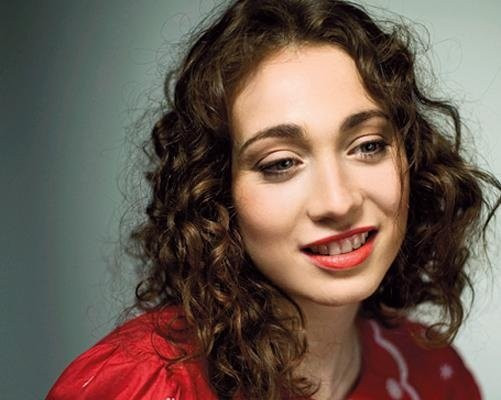 As the diminutive frame of Regina Spektor breezes on to the Colston Hall stage, the broad smile emanating from the Russian born singer-songwriter sets an unmistakably salubrious tone that effortlessly sustains for the duration of a highly enjoyable Saturday night performance. What emerges here is a crowd pleasing twenty-four tracks of songs old and new. Though currently touring around the September release of latest album Remember Us to Life, surely very few of tonight’s sold out audience will feel bereft on account of Spektor’s finely balanced set list and it is to her credit that there’s no apparent reticence in delivering her best loved tunes.

We hear six tracks from 2006 breakthrough Begin to Hope, a record that arguably remains her most common reference point; these include the staccato piano figure of opener ‘On The Radio’ which incites an instant cheer of audience familiarity and a clap along coda. However, it’s some of the new tracks that impress most within the first half of tonight’s set: ‘Grand Hotel’ is a delightfully quaint vignette of dramatic crashing piano and a fairy-tale jingle of keyboards while the toe-tapping ‘Older & Taller’ skips pleasingly along with its Beatle-esque verse melody. Meanwhile, the pensive lullaby of ‘The Light’ inspires an audience cry of “We love you!” a moment before Spektor can strike the final piano note.

Though persistently displaying her infectious smile of appreciation, Spektor rarely ventures conversationally beyond acknowledgment of her rapturously received songs. We are eight tunes in when Spektor introduces her band (three musicians in a mostly fixed line up of drums, keyboards and cello) and then follows with “Well, the world has gone down the shitter, what the fuck?” Considering Spektor’s known political affiliations (she has performed for Obama at The White House) and the fact we are a mere five days into the ludicrous reality of Donald Trump as US President-Elect, one senses the beginnings of a political rant. Refreshingly, she allows the sardonic, drama-intensive performance of ‘Ballad of a Politician’ – and the eerie final lyric “You’re gonna make us scream someday/You’re gonna make it big” – to do the talking for her.

Ubiquitously described as “quirky” or some other synonym, it is no basic task to pin down Spektor’s sound. With lyrical storytelling, an impressively diverse vocal range and tangential song structures, there’s an otherworldly sense of operetta, musical theatre or even a touch of vaudeville about her work. ‘Tornadoland’ seems to move through several figures – twinkling piano pop soon shifting into a baroque crescendo – and the theatrical ‘Sellers of Flowers’ evolves into something akin to an apocalyptic Disney track.

It is no criticism to say that Spektor is more enjoyable live than on record. She is an outstanding performer both for her effortless, classically-trained gliding around the piano keys and for the sweet robustness of her faultless vocals. Hers is a seamless spanning of vocal styles from the falsettos of ‘Bleeding Heart’ to the bratty rasps of ‘Small Bill$’ along with the idiosyncratic utilisation of her voice: the hiccupping vocal fills and Russian lyrics of ‘Apres Moi’, the outward breaths and near yelps of ‘Small Bill$’ and the repetitive cooing of ‘Sailor Song.’

The highlights of a consummate evening of music include, in tribute to Leonard Cohen, a knockout version of ‘Chelsea Hotel #2′ (the lyric “giving me head on the unmade bed” causing a nearby eruption of laughter as a mother tells her teenage son to cover his ears), a short but very sweet solo version of ‘Jessica’ and the frenetic cascading piano of the beautiful ‘Us’.

No doubt they’ll be varying highlights among audience members considering that Spektor has neglected none of her most popular tunes and, after the devastating swansong of ‘Samson’, she departs to a standing ovation from large sections of the hall.