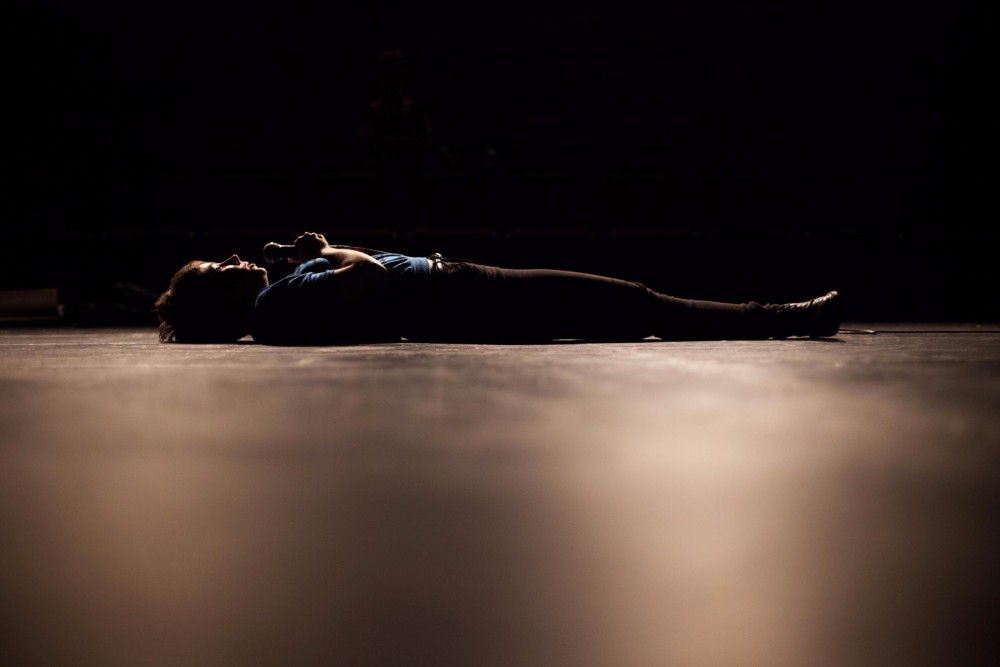 Solo Contemporary Performance, a South West organisation offering practical, artistic, financial and production to solo performance makers, has taken up residency at the Trinity Centre for two nights, taking over the entirety of the building to showcase five premières by artists. For the first night, these are Hannah Sullivan, Alessandro Marzotto Levy and Jo Hellier.

Sullivan’s work, With Force and Noise, is billed as her first attempt at articulating anger. A spoken and embodied performance piece, Sullivan emerges from darkness, inexorably edging towards a microphone, leaving the observer dripping with anticipation. What follows is a monologue, a strangely placid, sometimes funny spoken word piece which stutters impotently as Sullivan attempts to articulate herself. It is a finely tuned piece which relies on being note-perfect, and is. Bells attached to her back are utilised as she shakes with the rising temper of her monochrome memories, leaving a powerful trace on the audience.

The second performance work is that of Levy, Rabbit, which plays with ideas of fear and the unknown. A dance performance, the audience is first treated to Levy in a horrifyingly blank rabbit mask. With Vivaldi in the background, he sheds his skin, revealing new layers of costume, from Napoleonic militaria to workman’s garb, the dust from the costumes illuminated in the bright lights. It is clear that Levy has something very interesting to say, and while this is not conveyed fully, it is an absorbing performance nonetheless.

The brightest work, however, comes from Hellier’s film installation Flood Plans in the main auditorium of the Centre. A projection of manipulated images of water with a sound score, the piece touches on human agency with regards to climate change, and aims to create an unease about the future. In this it undoubtedly succeeds, the throbbing troubling audio sounding like it was recorded underwater – it would be fascinating to see how this was produced. The film is similar to the work of Pippilotti Rist and her mirroring of images in nature, albeit with a much more sinister undercurrent. The installation is highly affective and hard to watch, and it is easy to feel as if one’s chest is tightening under the pressure of the water.

A fine set of works, then, and an event which showcases not only the artists’ work, but also the power of collaboration and the excellent space that is the Trinity Centre. For utilising the whole of the building, including the imposing space of the Graffiti Room and Fyfe Hall, Solo should be praised.