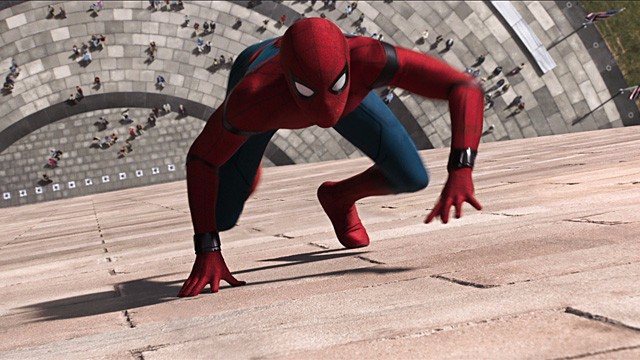 Homecoming is the newest reboot of the Spidey series since the underwhelming 1st and 2nd Amazing Spiderman films which starred Andrew Garfield as the web slinger and his then real life partner, Emma Stone, playing his on screen love interest Gwen Stacy. The two shared great on screen chemistry and although Garfield was by no means a bad Peter Parker, he just felt too old for the role. Add this to some troubling plot and villain issues, the films were just destined to fall short.

Thankfully Homecoming is just what the series needed. Donning the suit for the second time is Tom Holland since his brief but show stealing appearance in Captain America: Civil War. Set two months after Civil War Peter Parker (Tom Holland) has now returned to home and school in Queens, New York armed with a new technologically enhanced suit designed by his mentor Tony Stark (Robert Downey Jr.). Although Parker feels he is ready to join the Avengers and leave school behind, Stark wishes for him to be a “friendly neighbourhood Spiderman” until he is ready.

In the midst of his more “simple tasks” like stopping bike thieves, weapons begin to be used across the City, which are powered by something not of this earth. Adrian Toomes /The Vulture (Michael Keaton) is at the helm of the operation, finding alien weaponry from the events of the first Avengers movie and exporting these weapons to criminals of New York. Peter feels this is chance to investigate and prove he has what it takes to be an Avenger. But while battling the crooks of New York, Peter is also battling other relatable teenage problems, one key one being his High School Crush.

What separates this film from past Spiderman outings is that Homecoming gives the audience more of an insight to his school troubles, making this first and foremost a High School Comedy rather than a Superhero movie outright. Although it is great to see Spidey in great action scenes and swinging through the city, watching him try balance his School life and his Superhero antics feels fresh. What also helps is the comedy aspect has been done a lot better here than in other Marvel flicks. Even some quips that are slightly less laughable, like Parker having trouble with his suits features feel at least necessary for character development.

The casting and performances in this film overall are excellent, however Flash Thompsons portrayal is awful. I honestly don’t see the point of his character change and I feel it could anger dedicated fans. From my vague knowledge Flash was the Jock archetype that would relentlessly pick on Peter. Although there are snippets of verbal bullying present, he comes off frustrating and not in the way he is supposed to.

Continuing with characters, The Vulture is by far one of the better and more developed characters in the Spiderman and Marvel Cinematic Universe (MCU) franchises. Keaton like many of his recent films is in top form and serves up an extremely likeable villain. Also great are Peter’s nerdy best friend Ned (Jacob Batalon) and outsider Michelle (Zendaya). Holland and Batalon have great chemistry and form a great comedy duo while Michelle’s infatuation with Parker makes make eager to see how their relationship will develop and then there is Parker’s new love interest Liz (Laura Harrier). She is an interesting turn on Mary Jane’s girl next door archetype.

What I most enjoyed about this film is the fixation on the central characters. Peter is truly at the helm here and Holland’s performance really does convey a kid who’s way over his head and desperate to prove a point. Characters like Aunt May (Marisa Tomei) and Stark get the right amount of screen time. If you were worrying Iron Man was going to being invading Spidey too often, its ok, he only shows up in scenes that seem pivotal and never steals the spotlight. Overall it was great to see Spiderman swinging on the big screen again and I am really excited for future instalments.