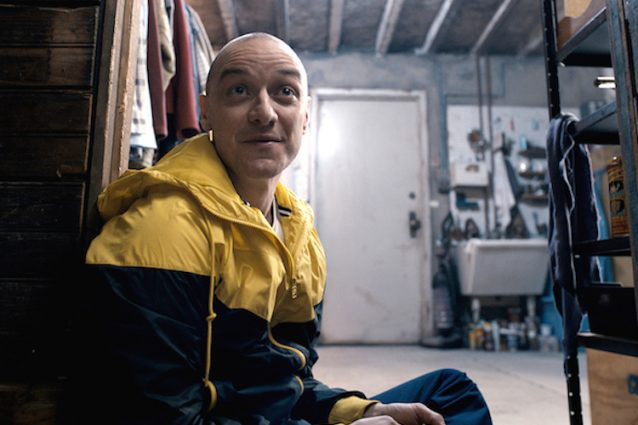 Night Shyamalan was once compared to Hitchcock after the release of his breakthrough film The Sixth Sense (1999). A character driven thriller starring Bruce Willis which was filled with suspense and of course, the now famous Shyamalan twist. He continued the success of his 1999 film with Unbreakable (2000) and Signs (2002) which for me was his last decent release, prior to what I see as his comeback with 2015’s underrated The Visit. In between 2002 and 2015 his releases were met with mixed to bad reviews and in general disappoint from a director of whom many thought was capable of so much better. So when Split (2016) was announced it was again deemed by critics at what could be Shyamalan’s return to form. And to the delight of many film goers and critics, it is exactly that.

I feel a bulk of this movies appeal comes from the excellent delivery of James McAvoy’s portrayal of several characters. The movie begins with the capture of three girls, including character Casey Cooke, played by Anya Taylor-Joy, who again gives a great performance following her breakthrough performance of 2015’s film The Witch. The girls are kept in a cell and are introduced to McAvoy’s various personae one at a time. First is the abductor Dennis, a strong and forceful character. Next are the overpowering Patricia and childlike Hedwig. All characters are conveyed sublimely, and all felt important to the plot.

What develops from here is more than just a generic ‘cat and mouse’ thriller. While the other girls immediately try to escape, Casey is reluctant and calm. Her actions are at first confusing but we learn more of her reasoning via flashback. Her backstory weaves in and out of the film’s central story-line, and as a viewer I felt as tense watching her recollection of events as I felt during the girls’ attempted fleeing. But whereas other flashbacks feel cheap, Casey’s characterisation is both justified and pivotal for the film’s final act.

After many nail-biting scenes of attempted escape, the girls are constantly reminded of another personality referred to as “The Beast”. Patricia explains in a chilling scene that other personae Dennis will not hurt the girls as they are being contained for something much more important, filling the viewers with expectation. Amongst these disturbing scenes the audience are introduced to another personality Kevin who attends meetings with his psychiatrist Dr. Karen Fletcher (Betty Buckley), who not only gives exposition on Kevin’s troubled past, but gives the viewer a break from the girl’s troubles, while at the same time help build anticipation for the finale.

The film is shot well with sound used to great effect, but as mentioned prior it is the plot and mainly the stand out performance from McAvoy that is for me the main attraction. As much as I would love to discuss the film’s ending and twists which are fundamental for Shyamalan films, I simply do not want to ruin for what others I feel to be the filmmaker’s best conclusion ever.However I will say it is a final act which left me riddled with suspense, shock but also gave me the need to smile leaving the theatre full of anticipation for his next project.