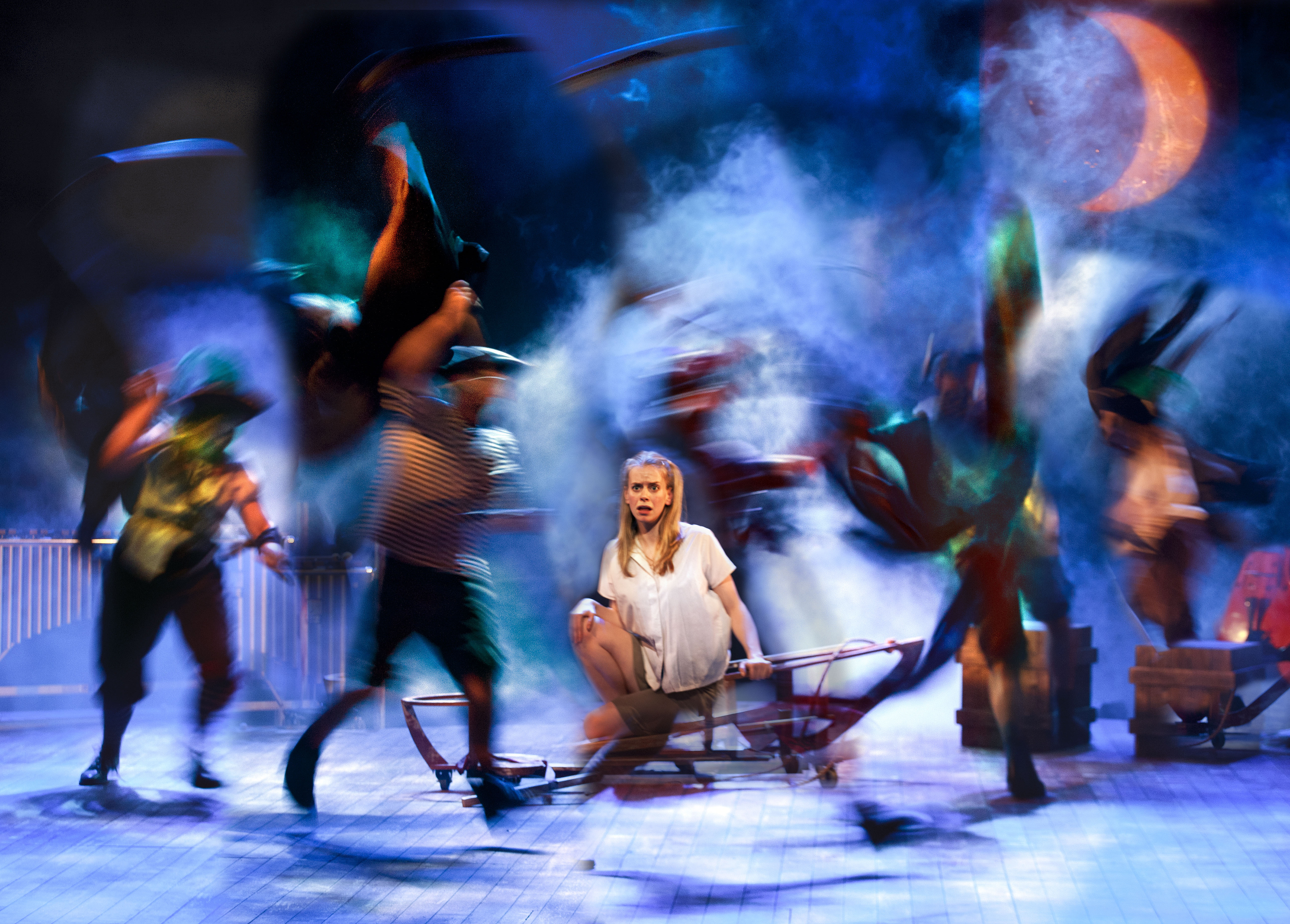 Stowing away at Bristol Old Vic this Christmas is Swallows and Amazons, returning to the theatre following its success in 2010. Taking inspiration from Arthur Ransome’s much-loved series, it is billed as a story of “an idyllic era of endless summer evenings and the beauty of youthful imagination…packed full of piracy, adventure and fun!”

Swallows and Amazons is the kind of story that is embedded in the national psyche – a story that you feel you should know, even if you have never read the books. It follows the adventures of siblings John, Susan, Titty and Roger as they use their boat Swallow to explore the waves, scrapping with Northern scallies and fellow adventurers the Amazons, as well as the supposed pirate Captain Flint, uncle to the Amazon sisters. As the children echo, “all grown-ups are barbarians!”

Unsurprisingly for a play created under the watchful gaze of Tom Morris, the staging is a triumph of lo-fi imagination. The waves are recreated using rolls of blue ribbon, and splashes come from a stage hand with his hand in a cup of water. Cormorants – or ‘harpies’ as the protagonists dub them – are strapped together using bin bags, and a fire crackles with the clicking of the actors’ fingers. Best of all is the diving of the children into the ocean, the stage hands carrying them as they flutter underneath the aforementioned ribbon.

Also unsurprisingly, considering that the soundtrack was written by Neil Hannon, the play is full of memorable music. Set in interwar Britain – the lack of smartphones is rather key to the whole plot functioning – Hannon’s brand of Albion whimsy works perfectly in backing the tales of corned beef and pocket knives. Almost all of the music is performed onstage by the cast, with a particular highlight being the scatting charcoal burners, augmented with an impish jive.

Swallows and Amazons benefits when it descends into farce and chaos. Most of the comic relief comes from the 7 year old Roger, played Tom Bennett with a full beard and moustache – the eldest John is visibly grey in his head follicles, and all of the actors are identifiably adult. The crowning moment of the play is the final denouement between Swallows, Amazons and Captain Flint, a piece of pure pandemonium which, without giving too many spoilers away, is a delight for younger members of the audience.

While perhaps a little overlong – some of the dialogue could be clipped to keep up the energy of the action – Swallows and Amazons is the perfect antidote to the [sigh] Pudsey-ed pantomime elsewhere in town. Bristol Old Vic has done brilliantly to pad out the excitement, with pavement graffiti outside the venue questioning whether comers are ‘Swallows or Amazons’. Audience members are invited to tweet in their best pirate jokes using the hashtag #Swamazons*, and schools in the region competed to perform a pirate shanty on opening night. All in all, an excellent show.

*Why do pirates take so long to learn the alphabet? Because they spend so long at C.