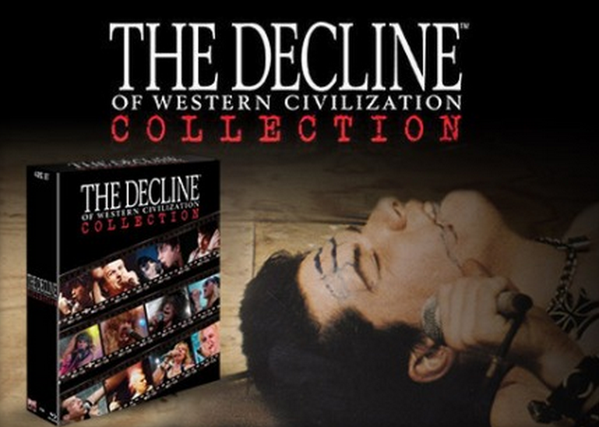 Though perhaps best known for her directing of 1992 box office smash ‘Wayne’s World’, and it’s less commercially successful sequel, Penelope Spheeris true legacy as a filmmaker is her 1981 documentary ‘The Decline of Western Civilization’ and the two sequels that succeeded it. Dealing with three separate eras of musical sub-culture in Los Angeles, Spheeris’ excellent trilogy will finally be available on DVD and Blu-ray on Monday 31st August.

‘The Decline of Western Civilization’ covers the LA punk scene from December ’79 to May ’80 and, featuring bands such as Black Flag, Circle Jerk and Germs, it is perhaps the most musically focused of the three films. Palpable early on is the anger and aggression of the songs which manifests itself in a series of volatile and chaotic scenes at gigs; “There’s a fine line between pogo dancing and fighting” we hear a security guard say later in the film.

A clear expression of a need to release pent up aggression, the music is without exception speedy, fuzzy, at high volume with monotone vocals, an approach summed up by Chuck Dubowski of Black Flag: “The songs are fast because that’s the amount of energy we have, and they’re short because that’s how long our inspiration lasts”. The songs are indeed short, mercifully so in such instances as the tinny drone of Catholic Discipline, and it is undoubtedly Spheeris’ off-stage interviews with the bands that provide the film’s true interest.

We are introduced to Darby Crash, lead singer of Germs, as he potters around his kitchen matter of factly discussing how self-induced claw marks and torso injuries were something he once did to “keep from being bored”. Heavily intoxicated, we see him falling about on stage with marker pen all over his face and bellowing incoherently into the mic. Germs’ clearly long suffering manager Nicole tells of how Crash would “smear himself in peanut butter” and “smash glass on his head” as a substitute for the band’s early inability to play their instruments. Even more shocking is the moment when a female bandmate recounts the “really funny” story of when the band posed for photographs alongside the corpse of a painter and decorator who was found dead in their garden. Did she feel bad that the guy was dead? “No, ‘cos I don’t like painters” is her deadpan response.

These encounters with Germs best illustrate the film’s pervasive theme of nihilistic youth and it’s not too much of a surprise to learn that within months of filming Nicole had quit as manager. Perhaps equally unsurprising, Crash was found dead of an intentional heroin overdose at the age of 22 shortly before the film’s release.

As well as gig footage and interviews with the bands, Spheeris interviews several punk rock fans who both accentuate the nihilism expressed within the music and offer suggestions of misguided posturing. Fourteen year old Eugene, admittedly young enough for misguidedness to be excused, talks of life as “Ugly, old people, buses and the dirt” while an older fan proudly decries “I’m just a rebel, I rebel against everything”. A few sightings of Nazi iconography within the crowd scenes is a reminder of punk’s contrived desire to shock and is surely the most potent symbol of a confused stance on rebellion.

Gritty and unpolished, ‘The Decline of Western Civilization’ exists as an authentic statement of the ornery culture it is depicting. The final scenes featuring Fear best encapsulate the pugnacious dispositions that fuelled punk rock; their severe homophobic hectoring of fans induces spitting en masse and a subsequent stage invasion which very nearly turns violent. All being said, the fans obviously enjoyed being there and believed that such chaos could afford them their very own cathartic expression of anarchy.

Slash Records founder Bob Biggs perhaps summarises it best: “They’ve gotta do something with their time, and it’s the most fun. Nothing else is going on, it’s the only form of revolution left in the 1980s.”

After the first film garnered a substantial following on home video, Spheeris was contracted by IRS World Media to direct follow up The Decline of Western Civilization Part II: The Metal Years filmed between August ’87 and February ’88. Leaving behind the defiant anti-capitalist streak espoused by the L.A punk bands less than a decade prior, Sunset Strip played host to the porcine ambitions and vacuous intentions of glam metal. Whereas the youngsters in the original film mostly came across as the naïve kids that they were, its successor is almost a cautionary tale on egotism and oblivious superstar excess that often plays out like a Spinal Tap-esque parody of its own absurdity.

Featuring interviews with the likes of Lemmy, Alice Cooper, Kiss and Poison, along with concert footage and the on and offstage fortunes of those hoping to attain rock superstardom, the subjects of Decline Part Two offer an unintentionally comic portrayal of a scene bloated with hairspray, spandex, squealing guitar solos and groupies. Leather-bound Gene Simmons offers his interview contributions while surrounded by scantily clad women in the lingerie section of a department store, his Kiss cohort Paul Stanley lays in bed with three lingerie models while Chris Holmes of W.A.S.P lies floating fully clothed in a pool with several bottles of vodka and his mother for company.

While not too many of the musicians here come across at particularly likeable, (although Lemmy comes over as level-headed and Stanley not as oblivious as his silly bedbound milieu would suggest), there is a recurring theme of priapic obsession that renders large parts of the film as something akin to a teen sex comedy. An early crowd scene reveals a sea of long hair and mooning, jeering rockers London extemporise on cunnilingus, groupies are deemed “conquered ground” and the owner of a bar called the Cathouse proudly asserts how a lack of air conditioning results in the sight of more female flesh.

The film’s most notorious scene featuring a clearly inebriated Holmes floating in his pool while glugging bottles of Smirnov in front of his disapproving mother, has been subject to speculation as to its authenticity. To neck such quantities of vodka without so much as a grimace is so staggering a spectacle that suggestions that it was in fact water in those bottles perhaps ring true. Indeed, the film’s second most notorious scene featuring Ozzy Osbourne frying bacon while adorned in a leopard print dressing gown has since had Spheeris offering concessions as to its mendacity; apparently the moment when Osbourne comically struggles to pour a glass of orange Juice while holding forth on his new found sobriety was staged.

Such confection somehow feels right for Decline Part Two; as an expression of the ludicrous and shallow musical scene it is documenting, Spheeris’ film is not to be taken too seriously. The faked moment featuring Osbourne (and quite possibly Holmes) is a microcosmic reflection on the ostentatious, attention seeking ethos of the genre in question. A completely different beast to the original film, Part Two is a slick and more polished piece of work that comically mines vapid rock star pretences to consistently entertaining effect.

The Decline of Western Civilization III, with an opening scene of young punks declaring that they were yet to be born when the original Decline was released, is effectively introduced as the first film’s companion piece. The third installment is a raw document of the struggles endured by the fledgling inheritors of a music scene that existed nearly two decades prior. Filmed between July ’96 and August ’97, there is less a focus on the music here and instead Spheeris offers up a poignant sociological account of L.A’s “gutter punk” lifestyle.

With the sight of mass chaos at gigs, the sound of finesse free guitars and talk of bleeding as “a badge of courage”, the film begins on a terrain familiar to that of the first film. However, in getting to know young punks with names such as Why-Me? Pinwheel, Tommy The Queer and Hamburger, we learn that the scene has degenerated to the point of creating its own underclass. Some of the punk kids, ranging in age from their teens to early 20s, tell stories of being beaten up by two types of skinhead: A group of anti-hate punks called Sharp (Skinheads Against Racial Prejudice) who nonetheless find other avenues of prejudice, and the Nazi skinheads who co-opt their look in order to create trouble of their own.

Later, we learn the true meaning of the term “gutter punk”; these kids are mostly homeless, cut adrift from dysfunction families and reduced to begging, steeling or cashing in on their striking appearances by “photospanging” (posing for pictures with tourists). Hoping to raise enough money for the booze that will make another day on the Hollywood streets that much more tolerable, “Spare a dime, prevent a crime” and “I promise I won’t waste it on food” are two of the humorous approaches adopted by the panhandling punks. The youngsters all talk in casual admittance of their severe alcohol dependency and blithely acknowledge the short lifespans they expect to fulfill.

The punk kids are almost without exception victims of parental beatings, abuse and abandonment – these sad tales of loveless upbringings no doubt serving to inform their stubborn contrariness in choosing to live as nihilistic outsiders. With the film’s subjects existing as manifestations of a society that is no longer able to provide for them, here Spheeris’ portentous choice of title for her trilogy starts to lose its irony and begins to serve as an apposite one. A member of the band The Resistance talks presciently of an “economic class war” and an expanding gap between rich and poor that will chew up and spit out the “have nots”.

Ultimately, Spheeris understands that her subjects are just the unfortunate products of compassion free parenting and a hand harshly dealt. Her to-the-point style can seem a little hectoring at times, (as when she curtly instructs wheelchair-bound Darius to look at the camera during his telling the story of the car crash that paralysed him) but overall you sense her affection for them and what transpires is Spheeris as a concerned mother figure. In fact, as well as all profits from the film being donated to charities for homeless and abused children, this experience encouraged the director to begin her life as a foster parent.

Poignantly detailing the sad plight of young people barely out of childhood, ‘The Decline of Western Civilization III’ works as a powerful social commentary and, of the three Decline films, is the best achievement as a pure documentary.