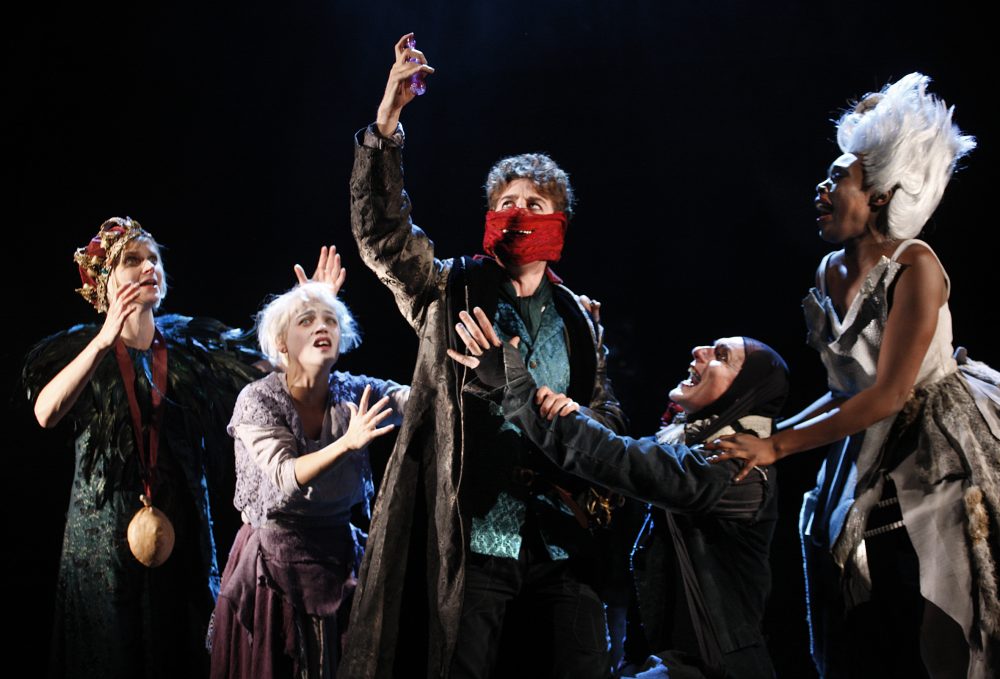 Set in a kind of make-believe pre-Georgian Bristol, The Grinning Man tells the story of Grinpayne, a troubled but loveable young man whose face was carved open when he was a child, leaving him with a permanent and maniacal grin. Five years in the making, the musical is based on Victor Hugo’s The Man Who Laughs, and has been developed by Director Tom Morris alongside composers Tim Philips and Marc Teitler and writer Carl Grose.

Make no mistake – this is a macabre musical. The tone is set when the opening song suggests that “there is always someone whose life is worse than yours”. A terrifying wolf emerges from the distance and traitors are hanged in the forest. The entire play centres on a character whose jaw is wrapped in bloodied bandages, and a stunning lightning reveal displays the full grotesque face in all its twisted glory. The recommended audience age of 12+ is certainly worthwhile.

While the play is macabre, it is saved from being gloomy and grim both by its high energy and by being packed with weirdly funny and uplifting moments. The audience is encouraged to be “riddled with worms of joy”. Stokes Croft provides the setting for the freak show fair. King Clarence dies by choking on a pigs trotter – I’m not sure if I am the only audience member reminded of David Cameron’s ‘Pig-gate’ fiasco. Best of all is an “erotic breakfast dance” performed with such a lack of enthusiasm that it is described as like “watching a cockroach have a wank”. That The Grinning Man descends into something akin to a pantomime farce by the end and yet retains its dignity and structure is of credit to the tremendous skills of the cast and director.

The energy of the musical is latched onto with great gusto by the cast. Julian Bleach provides the pantomime villain of the piece as Barkilphedro, a nefarious clown who also manages to entice the biggest laughs. The central duo of Grinpayne and Dea are enacted superbly by Louis Maskell and Audrey Brisson, the fragility of the latter’s vocals working effectively against Maskell’s more powerful prominence. Elsewhere Gloria Onitiri provides the sultry soulfulness in her role as the nympho-maniacal Duchess Josiana, while Sean Kingsley is superlative as Ursus, his authentic throaty singing an antidote to the kind of bombastic, stylised vocals witnessed in West End musicals. The music – provided live by superb musicians at pit level – avoids the trap of descending into ‘conversation-singing’.

As is often the case with Bristol Old Vic productions, the set deserves as much of the applause as the actors and musicians. For The Grinning Man designer Jon Bausor has erected a giant bloody smile around the entirety of the stage, ensuring that the first impression of the crowd is one of awe. Elsewhere there is moving forestry and eerie nooses hanging from trees. Best of all is the impressive cathedral, which provides the backdrop to the denouement of the play and its most exciting part, as the aforementioned wolf comes crashing through a giant stained glass window.

It is not overstating things to suggest that The Grinning Man provides a new standard for eclectic musicals. There are not many shows which could get away with a line like “in these circumstances incest is acceptable”, but The Grinning Man elicits from the audience a complete immersion into its gruesome and wicked world.