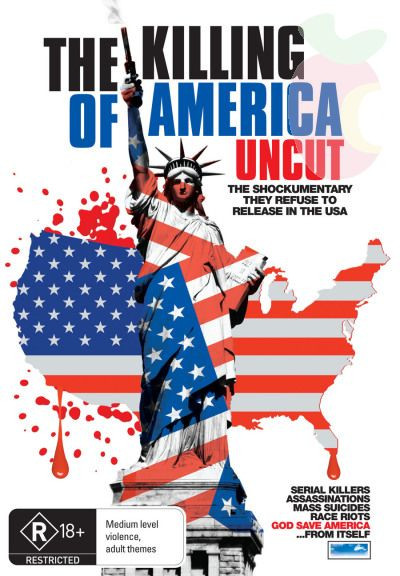 After Sheldon Renan and Leonard Schrader’s lurid anthology of the United States’ history of violent crime premiered in New York City in 1982, their film subsequently failed to receive a commercial release; thus ‘The Killing of America’ – a graphic, shocking and provocative 95 minutes of film – disappeared into obscurity. Over thirty years later, Renan and Schrader’s documentary resurfaced at film festivals and has been slated for a UK DVD and Blu-ray release this month; now, of course, with the added weight of the highly marketable tagline “the film they didn’t want us to see.”

Such is the film’s hard-core and unflinching approach to the grisly details of American violence, it is no real surprise that, for better or worse, it never initially managed to secure commercial visibility. It offers up a relentlessly vivid assortment of raw footage – assassinations, riots and police shootings, still photographs of the lacerated corpses of victims and verbal description of some of the worst human misbehaviours imaginable.

Using archival footage, interviews, still photograph and news broadcasts, the film can essentially be divided into three parts: Firstly, there are some of the key political assassinations and movements that have shaped American history; we are privy to the real-time commentary of John F Kennedy’s motorcade passing the Dealey Plaza in November 1963 followed by a gruesomely discernible view of the fatal moment.

The assassinations of Martin Luther King and Robert Kennedy are also covered (though not so luridly) as are the riots that followed the former’s death and the student protest movements in the wake of the wars in Vietnam and Cambodia (we see John Paul Filo’s iconic shot taken during the killing of students at Kent State University in 1970).

Secondly, we move on to deranged individual murderers motivated either by the “senseless killing of random strangers” or, as was the case with Charles Manson, the mad delusion of salvation through bloodshed. For those reasonably acquainted with American history, covered are the more familiar cases such as the mass suicide at Jonestown along with lesser known murderers such as Herbert Mullen who, gripped by fantasies of divine interventionism, was told by God to kill others in order to save California from earthquakes.

Finally, in the segment of the film where the impact of its harsh imagery is replaced by that of shocking verbal description, we move on to the sexually motivated serial killers of the 1970s. John Wayne Gacy who, when he wasn’t helping out at fundraising events and children’s parties by dressing up as a clown, murdered and buried 32 teenage boys under his Chicago home. There’s a segment on Ted Bundy, appearing palpably intelligent and arrogant in footage of his court appearances, and cannibal killer Ed Kemper being interviewed from his jail cell.

When he hear him amusingly recount a bungled first date when he was sixteen, it is genuinely difficult to align the Kemper we hear with that of the horrendousness of his crimes. As discomforting as some of grisly visuals provided throughout the film are, the descriptions of Kemper’s crimes – he sometimes decapitated his victims and gratified himself with the bodies – are a real challenge to contemplate. Seemingly affable, holding an IQ of 136 and utterly matter of fact in his speech, Kemper seems chillingly to embody the “banality of evil.”

‘The Killing of America’ has the feel of a rather arbitrary, cobbled together compilation of violent crimes and does little in regards to any attempts to examine or explain. However, the easy access to guns is touched upon and there are moments whereby the ludicrousness of their availability is brought to the fore; President Lyndon B Johnson is seen espousing legislation that merely served to prevent minors purchasing guns through the mail.

Also explored is the phenomenon of America’s uniqueness as a world leader of homicidal crime. As of the film’s release in 1982, the USA was experiencing 27,000 murders per year compared to that of 6,000 in Japan, West Germany and England combined and, at a particular point, had a higher murder rate than countries, such as Cambodia and Nicaragua, who were enduring the horror of civil war.

A simultaneously fascinating, uneasy and gratuitous watch, the film vacillates somewhere between a shock tactic cautionary tale and a somewhat fetishist and unhealthy reflection of the violent society it is examining. ‘The Killing of America’ is a tough, slightly dubious but nonetheless compelling viewing experience, particularly in its vivid capturing of some salient parts of American history.

Thirty four years after its original release, unfortunately it is obvious to make the point that the issues raised in the film are very much of contemporary concern as America continues to suffer the malady of gun related violence. This is part of a continuum of a violent history rather than a retrospectively regrettable punctuation point. The killing of America continues.