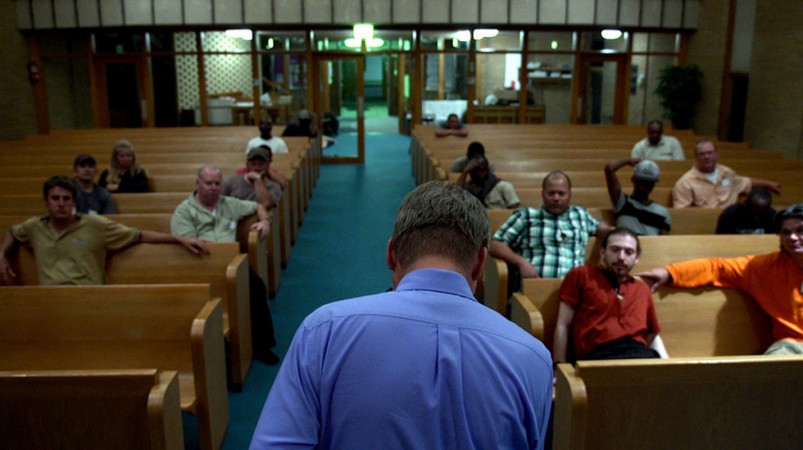 While the controversial practice of fracking lies at the heart of ongoing debates regarding welfare of the environment, Jesse Moss’ compelling ‘The Overnighters’ instead looks at the social, political and human interest issues that have arisen since the North Dakota oil boom of 2008. Lured by the potential of jobs and high wages, the boom has resulted in a mass migration of thousands of Americans to the small city of Williston and, due to limited employment vacancies and tripling rent prices, the problem of a large vagabond community.

This is where Pastor Jay Reinke comes in. With a fierce, religiously instilled sense of compassion, he has given rise to ‘The Overnighters’ programme at his Concordia Lutheran Church; a scheme whereby the church provides both floor space for makeshift beds and room in the parking lot to allow the new arrivals to sleep in their vehicles. Despite an almost idealistic sense of duty, the pastor is a man burdened with the most delicate of balancing acts; he faces dissent from members of his congregation who fear the growing numbers of inhabitants along with suspicion and a growing enmity from the surrounding community. “Not only are these men my neighbour, but the people that don’t want them here are also my neighbour”, we hear the pastor ponder with moralistic anguish.

Enigmatically musing on the painful conflict between public and private personas in the film’s opening scene, Pastor Reinke makes for as intriguing a central character as any documentary maker could ask for. Whether he is busy providing the new arrivals with leads on job opportunities, going door to door with the conciliatory mission of introducing local residents to the Overnighters or embracing even those with criminal records into an intensely fast environment of loving forgiveness, he at first comes across as a strikingly benevolent man in total unison with his ecclesiastical calling. The sheer force of his unassuming philanthropy reaches staggering proportions (at least until mitigation is introduced later) when he welcomes a registered sex offender into his family home and, thus, close proximity to his two teenage daughters.

However, there is more to the pastor than meets the eye; he is prone to a dry sarcasm as when he laments a local resident’s labelling of the Overnighters as “trash”: “How can a man with no teeth living with his daughter call others trash?” He also possesses an intense determination to pursue the path he deems correct and this sometimes rubs others up the wrong way; Alan, an ex-drink and drug addict who for years was a key helper at the church, walks out of his life forever after denouncing him as an egotist while the mismanagement of Paul, a drifter from New York, ultimately leads to a situation which lands the whole programme in serious jeopardy. The pastor’s humanity is progressively revealed as he struggles with his motives; is he self-serving? Is he just incapable of saying “no” to people?

The persistently tough drama is occasionally allowed time to breath with pretty acoustic guitar and scenic shots of the North Dakota mountains but the film is consistently uncompromising and, ultimately, happy endings appear scant for the new arrivals. Eighteen year old Keegan, despite a promotion on the oil fields, follows his unhappy young family back home to Wisconsin while another man, Michael, abruptly leaves Williston after tensions between him and his deserted wife leave him facing the dissolution of his marriage. The focus, however, remains on the pastor’s struggle; already a man being pulled in multiple directions at once, opposition to the Overnighter’s project is inflamed by news of two migrants suspected of the death of a local teacher and a litany of scaremongering stories in the Williston Herald links a rise in crime to the new ad hoc community. Furthermore, the pastor needs to deal with the issue of his estranged family and a neglect that at one point reduces his wife to tears.

Considering the film’s tale of a large movement of individuals lured to another part of America by the possibility of a better life, it is hard to avoid comparing the migrants of ‘The Overnighters’ to Steinbeck’s Dust Bowl “Oakies”. However, the film’s themes very much exist as something contemporary; in the struggle of often young men leaving their families to find work, the spectre of America’s present day decline and growing economic inequality looms ominously as a backdrop to the film’s earthy human stories. Furthermore, the themes of fear of the outsider, a media led culture of blame and a municipal objection to new arrivals being provided with more than what is deserved, have a strong resonance in an age of widespread immigration – particularly in modern day Britain.

It is, however, the tales of human struggle that deliver the film’s most fascinating spectacle; particularly in the pressures, internal and external, that are exerted on Pastor Reinke as he strives to save the Overnighters programme from going under. While Moss’ delicate and non-judgemental treatment of his subjects produces a brilliant first 90 minutes of documentary filmmaking, it is in the stunning denouement that its merits are carried even further. Offering new context to the pastor’s rigid empathy and will to ease passage for the redemption of others, his words earlier in the film start to ring indelibly true: “Everyone carries a burden”.

If you’d like to have a chance to win a DVD copy of The Overnighters then click here to enter our limited time competition.