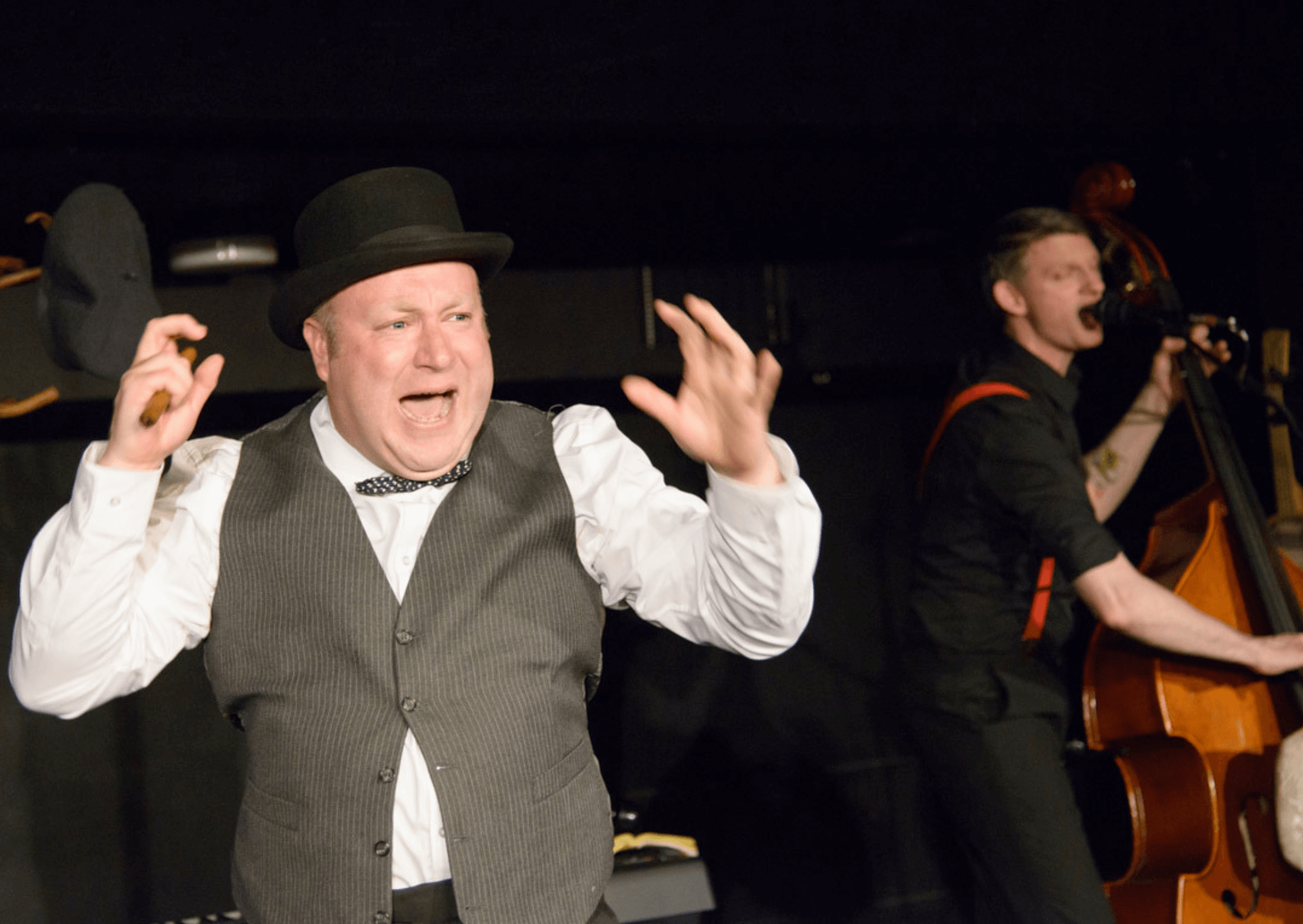 Craig Edwards appears behind a metal bathtub, apparently stark naked with just the tub to cover his dignity. He explains that unfortunately, Howard Coggins, due to appear as Winston Churchill, is ill. It is left to Edwards himself, the show’s Director, to stand in, and lend this whirlwind tale of Churchill and Adolf Hitler the “seriousness it deserves”. As if to prove it, he strides forward, revealing a private area strapped in by a pair of Union Jack Y-fronts, before donning an inflatable paunch and puffing on a big fake cigar.

The tone is set for an hour of quick-paced slapstick, as Edwards and co-star Stu Mcloughlin (playing Hitler) take on as complicated and weighty a subject as World War II in their familiar light-hearted way. In true Living Spit fashion, there are plenty of sideways takes and levity, as well as clever use of minimalist stagecraft. A crisp packet is rustled to recreate the crackle of a 1939 radio broadcast. Mcloughlin dons a fur hat to take up a role as Churchill’s famous ‘Black Dog’ of depression. Hitler longingly searches a Yellow Pages in search of a bookshop stocking Mein Kampf in a smart take on 1980s advertising.

If Coggins’ absence is noted by the cast, it does nothing to detract from the show as Edwards inhabits Churchill, Benito Mussolini and Otto Skorzeny with ease – the latter’s facial scar recreated with a simple rubber band snapped around Edwards’ noggin. Mcloughlin, meanwhile, adds musical aplomb, switching from double bass to guitar to ukelele, giving the show momentum with silly songs. A highlight is Hitler’s final moments, flourished with a strident power ballad. Best of all is a 15-minute staging of the Second World War, an inventive speed through of one of the most important periods of modern history.

The show is not without its downsides. The effeminate portrayal of Rudolph Hess feels outdated, as does the mockery of text-speak. When the pair get to the gassing of the Jews, there is a risk that such a serious crime will thud clunkingly into a performance that is so lighthearted, but they just about manage to pull it off with a moment of poignancy. On the whole though, Adolf & Winston manages to tackle its subject matter with fun, celebration and winning energy.