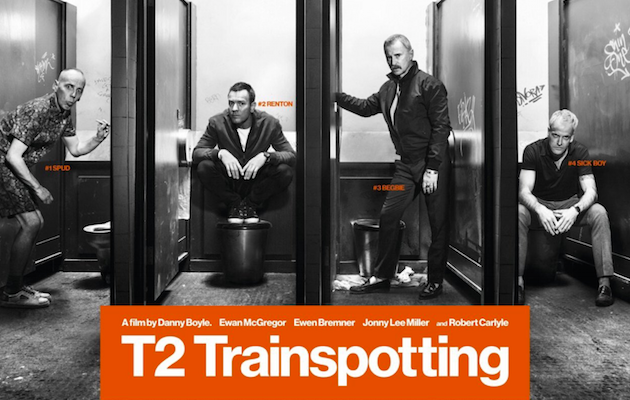 The original Trainspotting was released in Britain in 1996 to critical acclaim. Fast forward twenty years and Danny Boyle is once again at the helm exploring the lives of Renton (Ewan McGregor), Sick Boy (Jonny Lee Miller), Spud (Ewen Bremner) and Begbie (Robert Carlyle). The original film gained cult status and is often regarded as one of the greatest British films of all time. While this movie may not have the same impact as its predecessor, this is certainly a welcome installment with its well-acted, superb dialogue and gorgeous visuals. Making this a must watch not only for fans of the original, but for fans of film in general.

Like the previous film the audience are introduced to Renton on the run, however this time round he is on the treadmill. A lot fresher faced, but still going nowhere. Succeeding this is a slapstick moment that not only addresses Renton’s current situation but typifies the comedy the previous film was famous for. Renton has been living in Amsterdam and takes an impromptu trip back to Edinburgh with the viewer ambiguous of his activities in Holland. Arriving home he reconciles with old friends including a suicidal and heroin addicted Spud and Sick Boy, who is running an extortion business with his partner and new character, Veronika (Anjela Nedyalkova).

Veronika’s role in the film is a strange one for me. Although I like her relationship and the effects it has on Renton and Sick Boy, I couldn’t help but feel that she overtook the characters I wanted to see more of, Begbie and mainly Spud. Begbie has been in prison for over a decade and escapes, still holding a grudge against Renton for the betrayal in the previous film. Robert Carlyle is fantastic as the hard man, but this is not his biggest appeal.

Like many of the characters in the T2 they are faced with the hard hitting reality of their current affairs, and although the drive of Begbie comes from his revenge, his vulnerabilities are explored deeply, making him not only a character I am empathetic for but one of the film’s high points. Spud however serves as a downside for the film. Or should I say the lack of him. Bremner’s portrayal is fantastic and I feel that every time Spud was in frame he was the highlight. This is why I wanted to see more. Instead we are given glimpses of him as a comic relief to the film’s main plot.

As far as plot goes this is a sequel that returns to its roots, rather than exploring new ideas. Some people may feel that this is a hindrance, but to me seeing the characters where I expected them to be after the results of the first film is a major positive. And this isn’t just for nostalgia reasons. Hollywood films recently just seem to overdo it with nods to their previous instalments, but T2 isn’t the case. Of course there are subtle nods to the previous film but they are used splendidly. Such as the song Born Slippy by Underworld did not annoy me, nor did it trigger nostalgia. Instead it was used for great reason. It drifts in and out at a slower speed to express the bleak atmosphere.

The film as expected hits hard with realism and like Trainspotting did in 96; it epitomizes great directed fantasy sequences. Veronika expresses during mid movie that people in her country don’t like to live in the past, which is exactly what Renton and the others are doing. And I like it for that reason; however this may not be the same for other cinema goers who were expecting something ‘new’. I appreciate and applaud Boyle for this time keeping it simple and letting the incredible characters do the talking. And as far as sequels go, this is one of the greatest in recent memory.