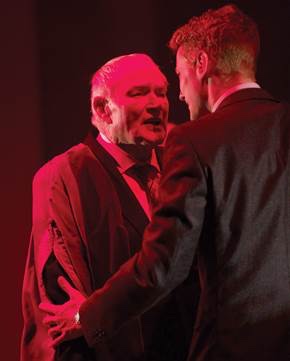 Following the great success of King Lear last year, Julius Caesar sees established actors Julian Glover (Caesar) and Lynn Farleigh (Calpurnia) appearing side by side with a new generation of the Bristol Old Vic Theatre School’s (BOVTS) soon to be stars, in what is now an annual creative collaboration of youth and experience.

As Director Simon Dormandy notes himself “[this is] an experiment in actor training and in production of Shakespeare”. With the Theatre School providing not only the actors, but also the sets, costumes, sound, make-up and so on with “young artists and technicians mentored by practiced craftspeople”. 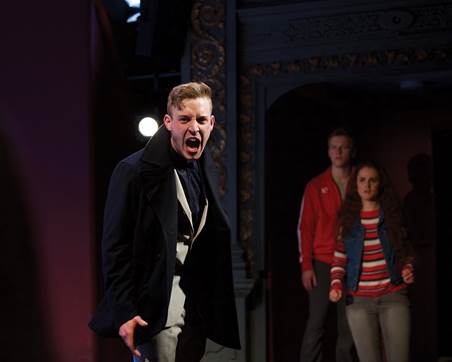 Set against a modern dystopian backdrop, Shakespeare’s historical tragedy is given a contemporary slant with Dormandy playing upon the current wave of populism that has seen the likes of Trump, Erdoğan, Le Pen, and Farage worryingly coming to prominence with promises of returning “power to the masses”, and then all the chaos, polarisation and social discord that can be stirred up in its wake.

Here the populist “man of the people” General Caesar (so beloved as to be messianic) positions himself skilfully as the very antithesis of the bloated elite. Refusing the crown, or even feigning to abhor the adulation of the mob, multiple times. Rather he stands for “change” and “freedom”. Yet, suspicions remain, most vocally in his inner circle, which expresses concerns that rather than reneging glory his goal is indeed the total control he professes to detest.

An abhorrence of despotism of course would have been heralded by any citizen of the Empire at the time, as being the very definition of what a great Roman should be – stoic and warlike, yet at one with the people, and never driven by an overriding desire to rule over all others. This was after all a Republic built on the very rejection of kingship (and all its inherent weaknesses toward absolutism), having overthrown its last King, Tarquinius, some 500 years earlier. Indeed it is this story, immortalised and bound up in the genesis legend (just as important as Romulus & Remus) that was the very definition of what it was to be Roman – “Senātus Populusque Rōmānus” or more freely defined as “The Senate and People of Rome”, essentially binding the success of Rome with it’s triumph of civic rights over despotic vice.

Whilst this tenet stood at the very centre of what it was to be Roman, the rise and rise of the individual, as Rome swept all before it, would ultimately drive its ideology into a terminal conflict with its reality.

It is this very clash that plays out here.

Whilst not one of Shakespeare’s finest works, and despite Dormandy’s best efforts to intertwine it with the current political climate, the play relies heavily on the production and performances for its colour and vibrancy – fortunately it succeeds with both.

Glover and Farleigh provide all the confidence and aura one would expect of such assured performers but the beating heart of the performance comes from the zestful youth of the cast.

The biggest compliment one can pay the graduating cast is how at ease they are with the older performers, deftly sparring with their more veteran counterparts as effortlessly as one could imagine.

Ross O’Donnellan as an intensely impassioned Marc Antony, Eleanor House as the cynical and cheeky Casca, Afolabi Alli as the sincere Metellus, Rosie Grey as the manipulative Decia, Rudolphe Mdlongwa as the spiky Cinna and turncoat Lepidus, are all memorable but it is the leads in Edward Stone as Cassius and especially Freddie Bowerman as the infamous Brutus that bring the whole thing together.

Stone’s Cassius is cunning and zealous, whilst Bowerman’s Brutus is utterly conflicted by the prospect of the betrayal of a man he reveres, but steadfast in his conviction that the liberty of Rome must be preserved, regardless of what that may cost him personally. 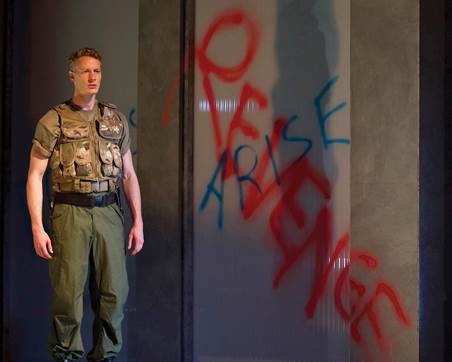 As noted the fledgling stars are not simply found onstage but also off it with stage designer Sarah Mercade producing a strikingly simple backdrop that during the first act appear as large warm granite panels before then seamlessly morphing into cold concrete blocks in the more militaristic second half.

Blending some very talented familiar faces with the fine production line that is BOVTS, Julius Caesar continues what is now an annual triumph that even Caesar himself would be proud of.

To get tickets, or to find out more click here.