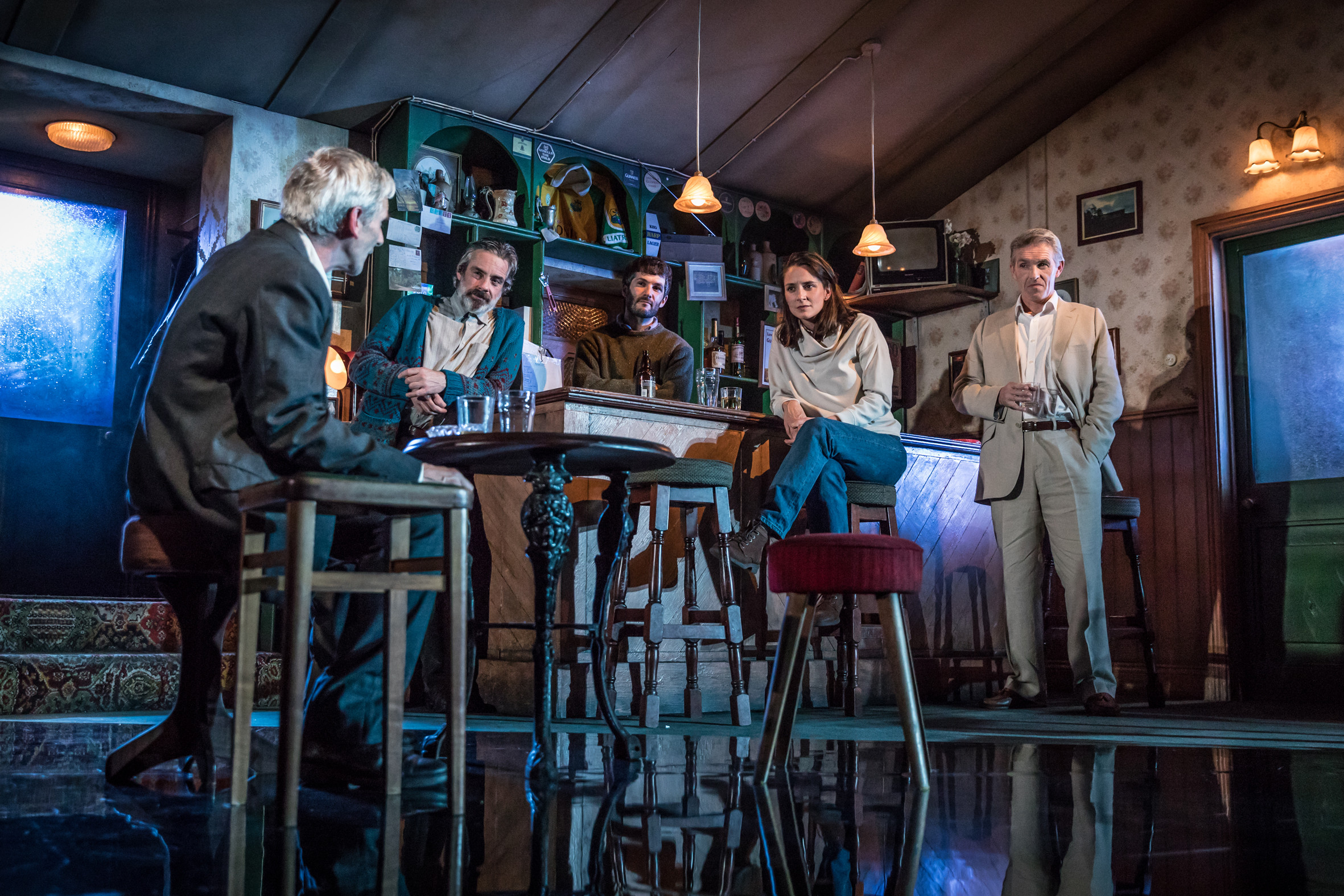 The institution of the Irish Pub is as powerful an International brand as any traded commodity, with nearly every country or far-flung corner of the globe being home to one. Given its omnipresence it is perhaps surprising then that not more plays have been set in one.

Conor McPherson’s The Weir, set in a quiet Irish country pub of the same name, follows five wounded souls as they explore their own damaged pasts, with a supernatural twist.

Mercury Theatre Colchester & English Touring theatre re imagining of this modern Irish classic, not only captures the atmosphere and idiosyncrasies of an Irish pub so precisely that you can smell the Guinness and peat fire, but also gives this quintessential cornerstone of Irish society a heartbeat, and its own voice.

With an unassuming facade and a small interior, there is evidence of the requisite woodwork, whirlwind of drinking (whiskey, beer & stout), small bar and two taps (one no doubt for Guinness and one for either Smithwick’s or Harp) that give such a place it’s distinct feel & craic.

The place, as devised by Madeline Girling (designer), simply reeks of authenticity, helping to draw the audience in before a word is even said.

Added to the exquisite staging, the perfect lighting by Lee Curran throbs and aches as necessary, as Richard Hammarton’s compositions provide just the lightest of touches to help guide the hand of the mood when required.

Director Adele Thomas blends these visual and audible elements into the performance beautifully, as lights flicker during the spooky moments, whilst a suitably bleak wind is heard whistling around the ominous moonlit exterior. The eerie is so complete that you can almost hear some unholy beast stalking the building just outside the rarely opened front door. It all adds to the enraptured nature of the audience as the 1hr 40mins running time flies by.

The excellent cast are led by elder statesman Jack (Sean Murray), a bedraggled mechanic and garage owner, who is the first on the scene, and helps himself to a tipple; he is joined quickly by Brendan (Sam O’Mahony) the young lost-soul of a pub landlord, and Jim (John O’Dowd), Jack’s unassuming assistant.

Long silences bear witness to that universal truth, so often found in such a place, that familiarity is not the same thing as friendship.

As the drinks begin to flow they decry local businessman, Finbar Mack (Lous Dempsey), for his brazen attempts to ensnare Valerie (Natalie Radmall-Quirke), a Dublin woman who has just moved to the area.

After Finbar and Valeire arrive the three old gaffers (predominantly Jack and Finbar) joust at the bar with each other, trying to impress the young visitor, half their age. But for all their bluster and bravado their fragile emotional sides glimmer just beneath the surface. 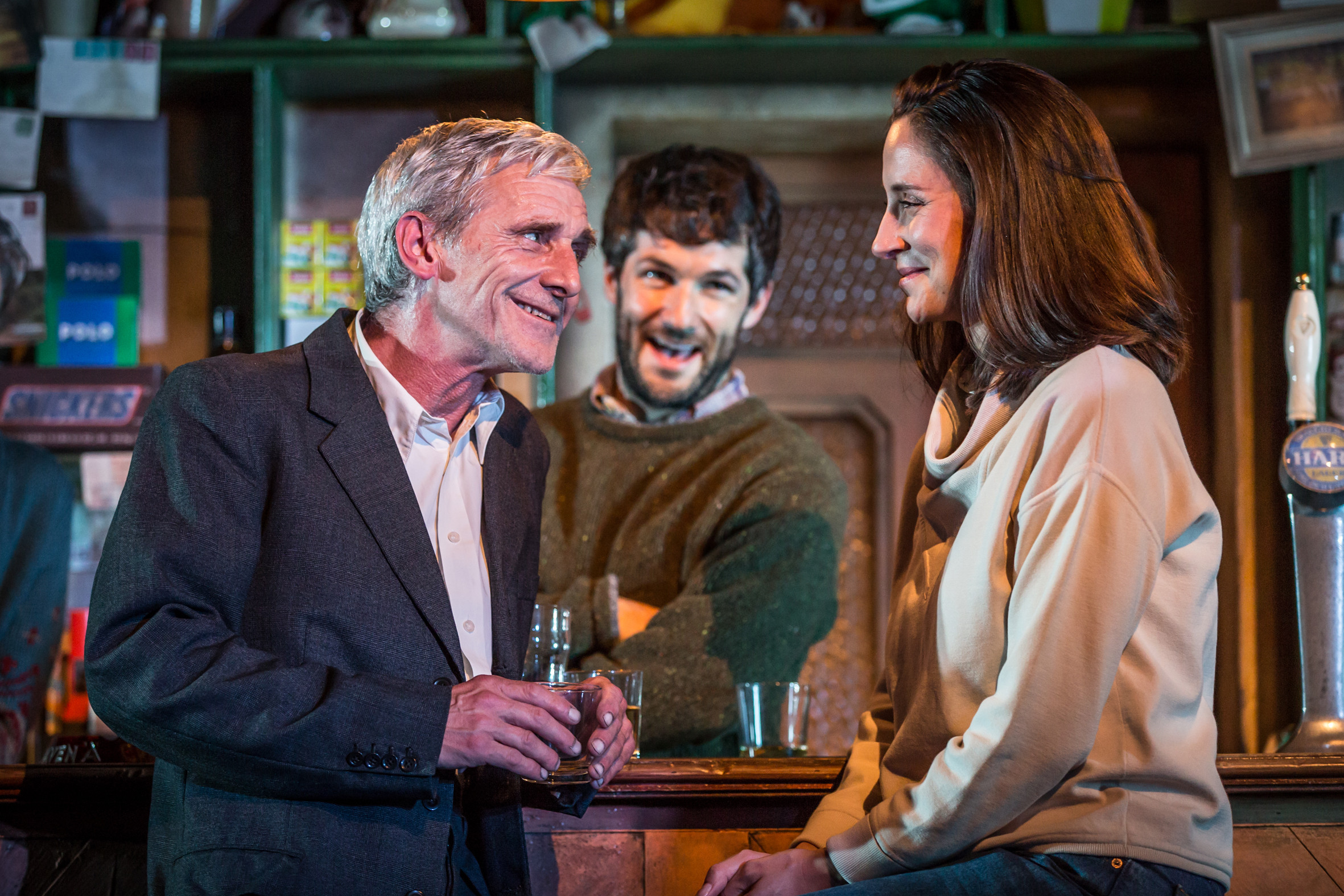 Soon talk turns to fairies and darker mysteries as each of them (everyone bar Brendan) recounts ethereal stories from their pasts. It is a truly mesmeric display, with each storyteller bringing a different slant and pace to their tale, but each speaking to us in absorbing ways.

Cathartic for all, many of their deepest fears and greatest disappointments are laid bare for all to see, warnings of what might be for the younger patrons.