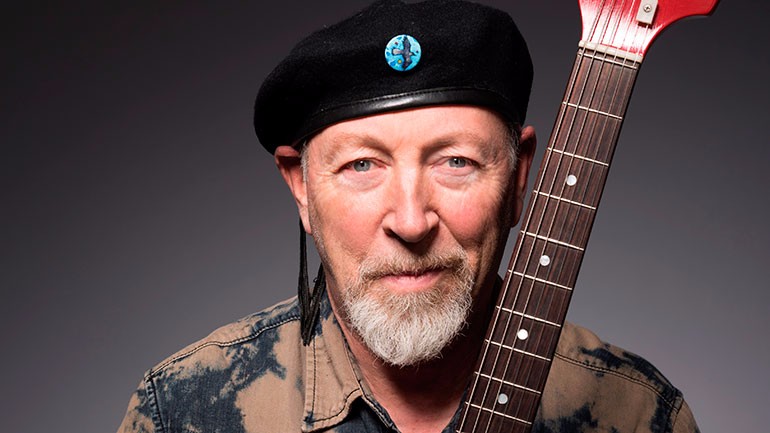 A full fifty years have passed since singer-songwriter and guitarist Richard Thompson made his debut as a recording artist with folk rock juggernaut Fairport Convention in 1967. Since then Thompson has – via marriage and divorce to ex-wife Linda Thompson, a ‘70s conversion to Islam, a mere brushing with the pop charts and the release of more than a couple of dozen studio albums – subverted his relative commercial anonymity and achieved eminent status in the pantheon of British folk. He’s also celebrated for his outstanding abilities as a guitarist and – with Thompson armed with just an acoustic guitar on this solo tour – they absolutely sparkle in the live forum.

Though informing the crowd that he only has two settings – “slow miserable and up tempo miserable” (that’s why he’s popular in Sweden, he jokes) – Thompson executes an enjoyably varied show with songs spanning roughly half his albums. There’s certainly enough moments of upbeat song-writing and whimsical lyricism to offset Thompson’s default for the downcast.

Adorned in his trademark Kangol reverse flat-cap, and a denim jacket atop black T-shirt, Thompson’ delves into 2003 album The Old Kit Bag for opening tune ‘Gethsemane’ and the snappy four chord motif is a pleasing sonic test for the crispness of his acoustic guitar sound. With heckled requests having commenced before Thompson has even sung a lyric, it’s seems to be a not wholly playful weariness that leads to an early appearance of Fairport Convention favourite ‘Meet On The Ledge.’

Though Thompson has undoubtedly amassed a fine song-writing cannon in the past five decades, it’s baring witness to his masterful command of the guitar that provides the evening’s greatest thrill. While a full band line up and free rein on electric guitar has sometimes led him down the path of indulgence, Thompson merely serving his tunes during a solo acoustic spot is a thing of beauty. The muted acoustic rock n roll of ‘Valerie’ grows into a spellbinding showcase of Thompson’s hybrid picking technique, ‘Beatnik Walking’ – an ode to perambulating around Amsterdam – is a fingerpicking masterclass and the aching wistfulness of Sandy Denny’s ‘Who Knows Where The Time Goes’ is ably evoked in Thompson’s lovely instrumental break.

Despite the early promise of variously paced forms of melancholy and Thompson later professing “My youth is just a hole in the ground,” there is by no means an overwhelming lean towards solemnity. ‘Hots For The Smarts’  – a tribute to the allure of the erudite – is a fun, cheeky showtune featuring lyrics such as “An autodidact/Who can add and subtract/While sipping her Tolstoy and tonic.” Meanwhile, ‘Feel So Good’ drives forward with a verve and a schadenfreude sense of youth (“I’m going to break somebody’s heart tonight”) that belies that the song was released when Thompson was in his forties.

After demands for its appearance endure intermittently from the very start of tonight’s performance, the first of two encores finally sees the inclusion of fan favourite ‘Beeswing.’ Thompson’s pretty ode to female beauty highlights another satisfying aspect of his live performance: Though not the greatest singer in a technical sense – he’s more Bob Dylan than Roy Orbison in respect of naturally gifted vocalists – Thompson’s live vocal makes for a more or less exact replica of his recorded versions.

At 68 years old, Thompson’s ability to command an audience with just an acoustic guitar and his voice – not to mention his dynamic hybrid picking – shows little sign of wearing with age. It’s an adept performance by an old master.