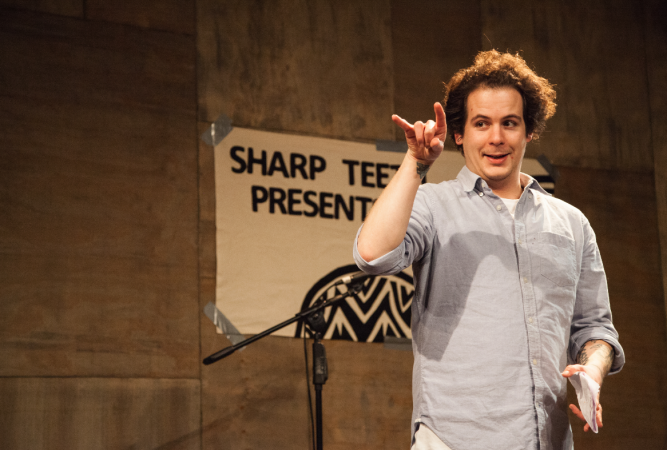 On Sunday evening The Wardrobe Theatre in Bristol’s Old Market quarter provided the platform for the Sharp Teeth theatre company to offer up its monthly showcase event that featured acts from four different creative disciplines. Poetry, improv storytelling, theatre and music was in store for the audience in this packed venue and we were spoilt as the bill threw up outstanding humourous and thought provoking acts. In truth, I was overwhelmed by the high calibre of performance at this wonderful venue where the hosts offer the audience an opportunity to pay what they decide.

Sharp Teeth’s founders Stephanie Kempson and Andy Kelly compered an evening that began with an innovative tongue in cheek pre-recorded audio health and safety announcement. As it played out, the audio was complemented by the duo’s mock seriousness on show in their body language and facial expressions as the classic trip hazards such as cables were addressed along with the likes of bird flu. Their comedic offerings provided a fusion of intelligence with the offbeat and right kind of silly that would become a fixture of their collective performance as incredibly affable hosts.

Sam Grudgings, a highly respected poet, brought his brand of spoken word to proceedings and took the audience on a journey of complex mixed emotions with powerful and dark evocative ramblings juxtaposed with painfully funny self-deprecating humour. He did remarkably well to balance his act out throughout as he manouvered between the intense darker material and that of a lighter nature as he touched on subject matter about a friend who had passed away and his problems with alcohol to an unusual sexual encounter in Tunbridge Wells.

Sam is an interesting performer to watch; his style of delivery is frenetic but passion and torment comes out in the words of this likeable gent amongst genuinely witty observations and the occasional ode to popular culture. For me the highlight was a poem in which the narrative centres on a letter he wrote to all his ex-girlfriends at the same time. It’s read as if it’s more of a self-analysis because he lists them from one to five and addresses each point of the letter to them all in different ways throughout. It’s very clever and creative and probably his most accessible material because we’ve all probably either written one of those letters or at least felt like doing so. One moment that literally made me laugh out loud was when he told one girlfriend that he’d heard she was dating another Sam, who he called Sam 2.0, who is a model with a better house, job and a cute puppy. Unfortunately the prelude to this poem was that he was finally retiring it, but I’d hope he’d reconsider. 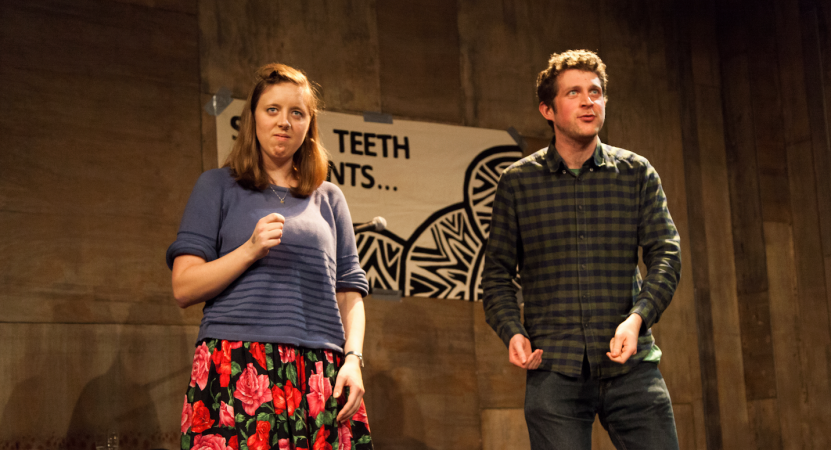 As Sam headed off to rapturous applause, Stephanie and Andy returned in a new capacity as improv storytellers, feeding off the audience to create a story of revenge in which they delightfully weaved in three David Bowie tracks named by the audience beforehand and several Alan Rickman characters in an amusing tribute. Huge credit has to go to the quick wit of Stephanie and Andy, which prompted floods of laughter; one woman sat next to me looked like she may spontaneously combust as she was in tears during their story in which Harry Potter’s Severus Snape was eventually taken out by the older brother of a childhood friend who he been callously murdered by the villain.

A short break allowed many to re-stock on drinks from the adjoining Old Market Assembly, a lovely and rather hip venue, and many would appreciate its allowance on taking drinks through into the theatre. I actually found myself taken aback when one couple had a whole bottle of wine with them. 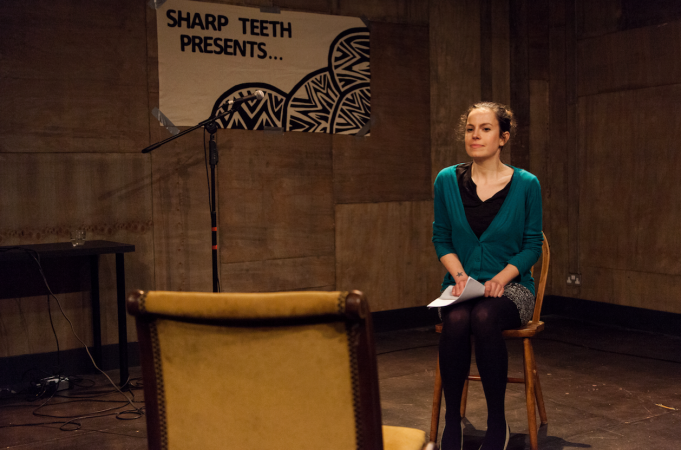 Ellen Waddell was next to entertain with an early airing of her new one-woman show. Having previously had success at the Edinburgh Fringe, you could clearly see why she’s highly respected as a performer and a writer and as I was told beforehand that it was experimental I was expecting material a little bit more raw and less rounded than it was. Laugh out loud funny, brutally honest and offering a frank self-assessment of her 30-year-old character’s life to date, Ellen’s work struck a chord in me as I’ve been recently been writing scripts based on that sense of disillusion that we in our late twenties and early thirties face. At times it feels as if we’re in a world that’s been and continues to be fucked up by our elders whilst our own coming of age brings upon us the realisation that we can’t have it all and how for many life is not necessarily going to plan. I know that wasn’t necessarily what Ellen was aiming for, she may read this and think, “wow, that guy’s clueless,” but writers and performers strive to evoke feelings in their audience and she certainly did that.

Ellen’s show had a very intriguing set up. Her character is at a job interview and a pre-recorded interviewer asks the same questions twice with one answer being given by a hilariously over-enthusiastic 27-year-old who’s trying to say the right things and give off a good first impression and the second being given by the deadpan, blasé 30-year-old who’s pretty bitter at the fact she is having to interview for a mind-numbing admin role in the first place. I took it as the fake self edited persona and outer exterior put on for that situation vs the real you’s inner thoughts on first viewing. Upon reading more about the show I found out that she was looking to highlight the difficulty of honesty in a world where self-promotion is valued above all else, which I think she did rather well whilst lacing it with fine humour and analysis that makes you think. I’ve concluded she’s much brighter than I am. As said, wonderfully entertaining and impeccably performed. It’s an admirable example of high concept, low budget production, which always impresses me.

The final performer was Gecko, a musician who’s been getting a good deal of hype including Radio 1 airplay, festival appearances and even tweets from Ed Sheeran. I hate comparing musicians to others but armed with an acoustic guitar, vocally Gecko reminds me of Jamie T in terms of style, though with more melodic and catchy choruses, and Flight of the Conchords with regards to audience interaction and banter. However, he’s certainly unique in terms of substance with his wonderful view on the world coming through in his songwriting where he puts it to rights and gets you thinking.

I remember reviewing an early Catfish and the Bottlemen gig and commenting on how their frontman Van McCann was almost giving a sideshow of stand up comedy between songs and when watching Gecko you get the sense that in a longer slot this genuinely funny chap could entertain on both levels too. Like the earlier improv storytelling, it was silly in the right places, which is why I drew comparisons to Flight of the Conchords, and this was particularly evident when he told the audience that he has two more songs but really he wants one more and then an encore before actually faking surprise upon the audience screaming for more after playing his penultimate song. He also pre-arranged audience interaction in the form of repeating after him at certain stages and after getting the audience to sing “I think I might buy this guy’s CD” he yelled out “It’s a verbal contract,” which particularly reached my inner childishness.

Despite lauding his comic abilities, the real praise should be levelled at the music. He played four songs with the witty “iPhone, Therefore I Am,” (video here) making his views known on those who make up what many call ‘the iPhone generation.’ “Rapunzel” gave us something to ponder over when taking apart that particular story whilst another clever song that I think was called “Any Other Room,” was written from the viewpoint of a character in a famous painting in The Louvre that doesn’t get a look in because it’s in the same room as The Mona Lisa. As with the others, this was provocative but also quite sweet and interesting in terms of subject matter. I think the audience would have quite happily watched another hour of his music.

As you can probably tell, I had a truly wonderful time at this Sharp Teeth event and I’m looking forward to attending as a punter once more. It’s taking place on the last Sunday of each month until a break comes in June and if the billing is as strong for future events then it’s definitely worth a trip up to the Old Market Quarter next time around. It’s also crucial that these kind of events take place, giving relatively young performers a platform to showcase their work, hone their craft and progress.

You can follow Sharp Teeth on their Facebook page, whilst they’re also sending Tweets out into the world via @tinylittlefangs