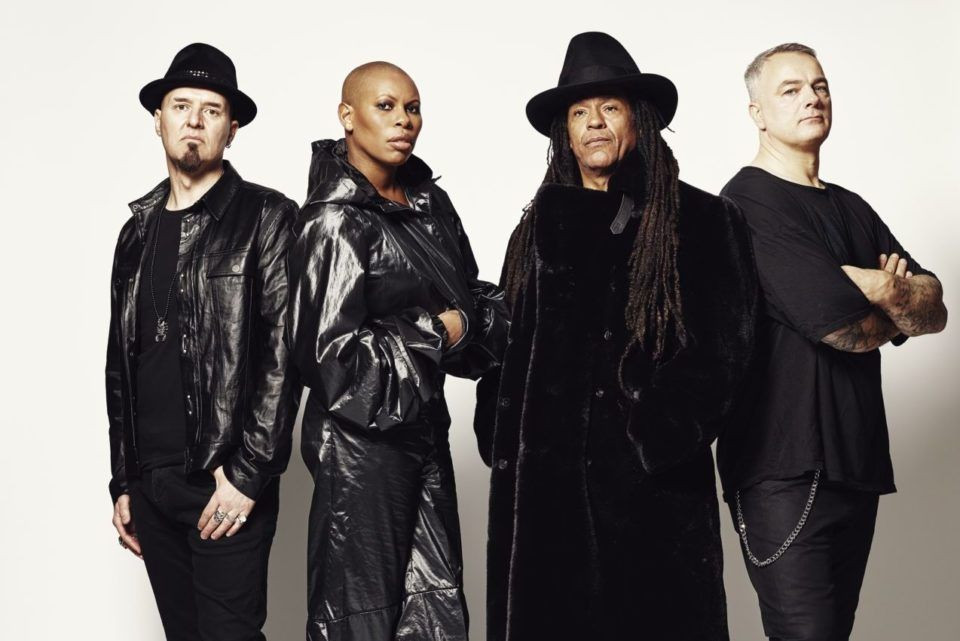 Having experienced their commercial pomp somewhere within the slightly bloated jubilance of Britpop and Cool Britannia, it’s perhaps easy for memories of Skunk Anansie’s politically-tinged hard rock to be somewhat lost within a retrospective haze of New Labour, contrived Oasis vs Blur chart showdowns, lads in bucket hats and gargantuan gigs at Knebworth.

Currently on a European Tour to celebrate their 25th anniversary, it’s hightime those memories re-emerged from the fog. After all, two top ten albums and a string of top 20 singles culminated in a headline slot at Glastonbury Festival in 1999 – one memory that recently has become pertinent after Stormzy’s promptly rebuffed claim of being the first ever black British artist to headline during this summer’s festival.

This rebuff, of course, arrived courtesy of Skunk Anansie’s charismatic, bald-headed frontwoman Skin (real name Deborah Dyer). Bounding confidently on to the stage in knee high boats, large shouldered latex coat and a zany piece of headgear resembling a futuristic mechanical squid, there’s a menacing vibe somewhere between Rocky Horror and Mad Max. These items are quickly dispatched during first track ‘Charlie Big Potato’ as Skin strides the stage with her mic stand and reveals absolutely no wear-and-tear to her almighty vocal pipes of yore.

It’s as riveting an opening to a gig as one could hope for and, on the watch of the 52 year old Skin’s powerhouse and age-defying stage presence, it’s a high-octane mood that barely relents all evening. She stands astride the photographer’s pit during ‘Because of You’ while Martin ‘Ace’ Kent’s roaring guitar assault appears to overcome the O2’s propensity for unsatisfactory acoustics. ‘I Can Dream’ brilliantly captures the intoxicating synergy of scuzzy guitar riffs and blistering vocals while ‘All In The Name of Pity’ see Skin dive headlong into the audience for the first of several instances of crowd-surfing.

Such is the clear evidence of Skin’s force-of-nature vocal talents that it’s a genuine surprise when she declares “I’ve got a confession to make” and reveals that she is suffering from laryngitis. Not that anyone could tell; in fact, one wonders what she would sound like if she didn’t have a bad throat. A winding down during ‘Twisted’ sees her stood amongst the crowd, gently imploring those surrounding her to “chill” before a terrific moment when the band kicks back in and Skin manically jumps up and down in unison with her audience.

During 1996 favourite ‘Weak’, she’s amongst the crowd again; this time the spectacular sight of Skin using audience members’ hands as a platform for her to stand high above the adoring crowd. She then jokes “I promised my manager I wouldn’t do that again” before thanking “all the strong people” who lifted her skyward. Subsequently, Skin prefaces ‘God Loves Only You’ with a Brexit inspired speech of togetherness (“it’s not about right or left, it’s about right or wrong”) before addressing her girlfriend somewhere in the audience.

Skunk Anansie isn’t just about Skin of course and the band provide a sonic sledgehammer to defy the venue’s often frustrating acoustics. Kent is somewhat akin to an alternative metal George Harrison in his proclivity to serve the song and avoid the spotlight (a measured solo here, a touch of wah-wah there), Cass Lewis bolsters the band with beefy, insurgent bass lines and Mark Richardson can perhaps lay claim to the most emphatic snare drum heard on this stage in some time.

Elsewhere, the rage-fuelled ‘Intellectualise My Blackness’ makes an absolute mockery of laryngitis, new song ‘This Means War’ sits comfortably amongst old favourites and a blast of AC/DC’s ‘Highway To Hell’ segues into ‘The Skank Heads (Get Off Me)’. Before final track ‘Little Baby Swastika’ Skin asks the audience if they want something “soft and delicate or hard.” There was no doubting which the audience would choose and there’s no doubting how emphatic a live performance we’ve just witnessed.