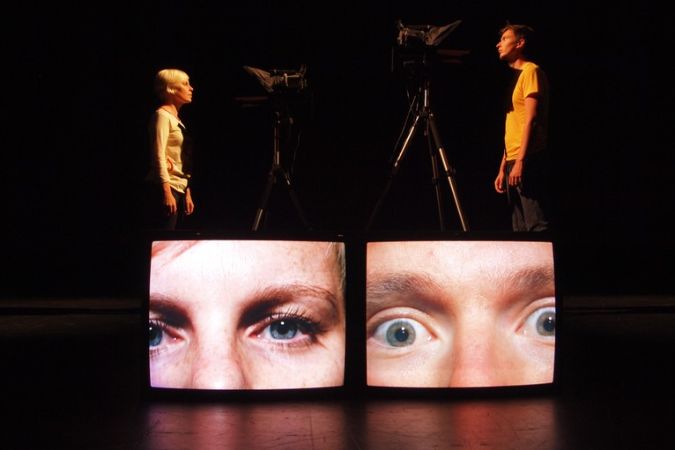 The premise for ‘Slap Talk’ is certainly a novel one: Standing under spotlights at either end of a darkened stage and each speaking directly into a camera, a man and a woman rant, threaten and insult each other while their vituperations are also broadcast via a live feed from their respective cameras to a pair of monitors that sit facing the audience. For six hours with the audience free to enter and leave at any point, Action Hero duo Gemma Paintin and James Stenhouse read from autocues scrolling a gargantuan script of verbal tirades in what is essentially the loquacious equivalent of a boxing match.

Originally inspired by the self-aggrandising, competitive bravado of boxers at pre-fight weigh-ins, ‘Slap Talk’ is a marathon, verbose sparring match that reflects both the power and dexterity of language and the linguistic nuances that are employed in the various contexts of everyday life. A script written completely by the two performers, save a few borrowed slices of dialogue from Apocalypse Now, American televangelist Robert Tilton and two Barack Obama speeches, Paintin and Stenhouse deliver both violent imagery and florid braggadocio while exploring different lexical styles ranging from the fire and brimstone rhetoric of the preacher, the passive-aggressive violence of squabbling lovers and the lame tenuousness of childish one-upmanship.

The show begins with both participants in pure pre-boxing match mood as they altercate over whom is the most ready for the fight ahead: “I was born ready” says Stenhouse, “I was ready before you were born” comes the riposte from Paintin. A regressive dialogue then vacillates back and forth as the pair grope for various phrases to express that they are indeed the most early in their readiness; “I was ready when you were just a glint in your Dad’s eye” induces the retort “I was ready even before you parents were born.”

The abusive language shifts from clipped exchanges and the use of rudimentary swearwords such as “Pussy” and “Fuck” to ornate monologues of absurd, over the top violence – “I’m going to give you an endoscopy, I’m gonna cut you open, get inside you and look through your eyeballs at myself like a ninja doctor of death.”

There is also the employment of synonyms during various parts of the show – “I’m going to annihilate/eviscerate/expunge/extinguish/liquidate you” while the list of crimes one wants to commit on the other range from “I want to stab you, mug you, assault you” before ending up with the incongruous “I’m going to GBH you on a street corner.”

After Stenhouse delivers a lengthy monologue to advertise his greatness, including the “Landing sucker punches on Redwood trees” and a chorus of celebratory whale song calling out his name, Paintin’s laconic response “I punch cows” highlights the occasional absurdity of one-upmanship and the pitfalls of groping for the right expression when under pressure.

The most effective part of the performance is when Paintin says “That’s going too far” after Stenhouse’s threat to pour bleach in her mouth. At this point, they seemingly break character and both rationalise that they have both acted mean as a reaction to the other being mean to them. Stenhouse then declares “That’s what it told me to say” in reference to the autocue and at that point the forth wall is broken. This highlights the power of language in confrontational situations and how words are often weapons designed to scold, infuriate or upset their target while not actually being consistent with one’s genuine sentiments regarding that person.

This section of ‘Slap Talk’ highlights the multiple layers that are at work within the colossal script and, while it feels unlikely that many of the audience will stay for the entire six hours, the numerous non-linear discussions on offer are sure to provide food for thought for those either getting comfortable or merely sneaking a quick glimpse.