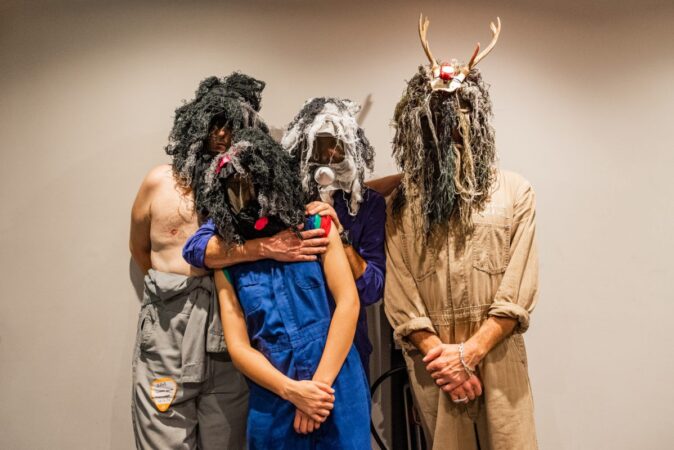 It’s great to be back at Moles. Established in 1978, this tiny gem on George Street, Bath, has for over four decades served as one of those venues, rich in heritage due to its hosting nascent musical titans who were still at the origins of their ascendancy. It’s been close to a decade since this reviewer enjoyed a memorable First Aid Kit appearance in September 2012; the Soderberg sisters had just performed for thousands at The Polar Music Prize, Stockholm, receiving a standing ovation from guest of honour Paul Simon. Two nights later I was stood, among a mere 200 others, just ten feet away from those gorgeous vocal harmonies.

Despite its illustrious history – Oasis, Blur, The Smiths and Radiohead have all graced the hallowed stage – it surely hasn’t seen a band quite like electro, post-punk oddballs Snapped Ankles. Or it already has, but only considering that this evening is the London-based five-piece’s second consecutive night at Moles. Advertising themselves as “forest folk…descended from the trees”, each band member – playing various combinations of guitar, sequencer, drums, bass and synth – remains anonymous behind a ghillie mask.

What transpires is overwhelming evidence that Snapped Ankles’ particular stripe of rave-infused electro-rock – akin to Goat with a touch of Orbital and the kooky streak of HENGE – can get a crowd moving, despite the practical barriers of a) a surprising number of post-middle age faces within the audience and b) close to 200 people effectively being squeezed together in a basement. Before new track ‘Barbecue in Brazil’, the frontman – sporting a green Volvo boilersuit beneath his mask – solicits the crowd to join in with each mention of “Brazil.” Some within the audience respond duly amidst the song’s swampy basslines and hypnotic, scattergun synthesisers.

‘The Shifting Baselines of The Cornucopians’, a lament of capitalism and henge funds in particular, is driven by an oscillating, industrial synth motif and a sardonic declaration of “It’s a great time to be alive” which, considering the Squid Game of global crises we’ve all endured in the last two years, feels particularly caustic.

‘Forest of Your Problems’ – the title track from the band’s 2021 album – sees the band member with antlers and a circular red light atop his head march into the crowd with a percussion block. Upon his return to the stage, the song extends into a floor-hopping multi-synth freakout. ‘The Evidence’ follows and it could well be the group’s true ‘banger’, it centring around a mischievously catchy synth line and a more melodically conventional chorus redolent of Kraftwerk.

The dynamic of Snapped Ankles’ music – surging in one moment, a slower breakdown in the next, before building to an explosive finish – feels something akin to a particularly adroit DJ knowing how to read a crowd and adjust intensity and tempo accordingly. One element that isn’t so effective in the live forum is – given that the band’s suitably otherworldly vocals are echoing away amidst bubbling reverbs – the indecipherable nature of the lyrics. There’s a Mark E Smith/Grian Chatten spoken-word style to the vocals, but those not intimately familiar with the songs will struggle to receive the message.

It’s a small criticism for sure; a lot of lyrics go AWOL during live performance and ultimately, as the per the allusion in the band’s ingeniously titled ‘Rhythm Is Our Business’, Snapped Ankles are ultimately about the grooves. If any doubt remains on the issue, set closer ‘Johnny Guitar Calling Gosta Berlin’ is an emphatic statement of clarification. Its gliding, euphoric synthesisers and pulsing rhythm section is the soundtrack to the night’s pinnacle of audience animation. The folks from the forest are certainly no interlopers as a new part of Moles’ fine legacy.