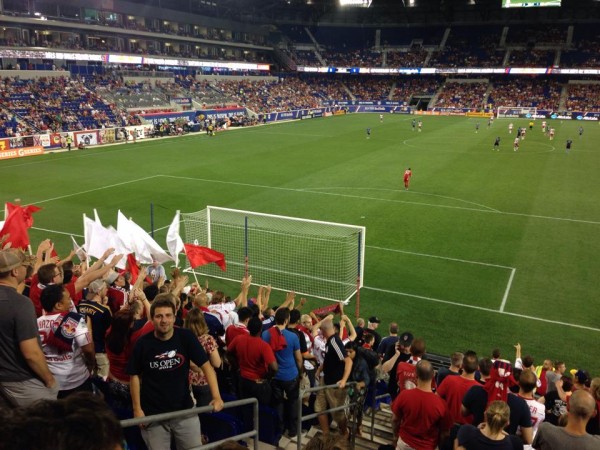 As a cynical Brit sat in the stands at New York Red Bulls’ heavily branded Red Bull Arena I’d like to think I would have been forgiven for feeling sceptical about any attempts to make the Major League Soccer experience feel as authentic as its European football counterparts. I found watching the sport over the pond to be a surreal experience with painfully enthusiastic stadium announcements, in your face corporate messaging and analytical overkill in the form of irrelevant scoreboard stats complementing the pub football defending that led to English league footballing flop Bradley Wright Phillips scoring his 21st goal in 25 appearances. Those who roll their eyes at the excessive dose of patriotism that ruins many an American movie would be sickened to know that the national anthem is played before every game, as it probably is to every pregnant woman in the country on a daily basis, and with fan shouts of “Go long” upon kick off and incredibly polite yet nonsensical digs like, “Your mother smells of elderberries,” at the referee, there’s no way you cannot ridicule all that goes before you.

Fortunately, there was plenty of opportunity to change my perception of watching the game of soccer in North America, where its rightful name, football, and phrases like ‘the beautiful game,’ feel like a secret handshake within the growing communities of the game’s fanatics who do actually know what they’re talking about. They appreciate the game’s traditions and values and have perhaps got one over on us here in the UK as they’ve held on to a sense of community and belonging that sadly I think we’ve lost on this side of the pond. In my opinion that more than makes up for those more farcical aspects. 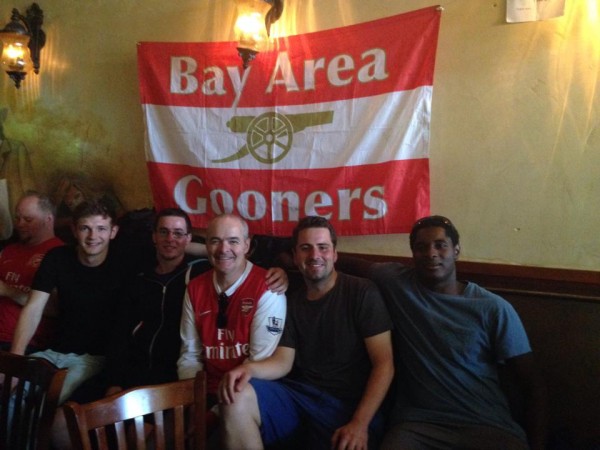 Unified – One club, one pub: Meeting the Bay Area Gooners

As an Arsenal fan I found my club’s supporter groups watching games at breakfast time in San Francisco and New York and north of the border in Vancouver and Toronto with hundreds flocking into each city’s ‘home’ bar. In any of them you can look around and see fans embracing each other like long lost brothers and showing unbelievable passion throughout the 90 minutes that followed. I was astounded by incidents that included the biggest child-like tantrum and explosion of expletives that has probably ever been directed at Everton’s Stephen Naismith and a grown man looking like he’d witnessed a puppy being shot upon hearing the news that his local wasn’t going to be open for the 4.45am kick off between Arsenal and Manchester City. These fans understand the trials and tribulations of the stereotypical football fan and are very much long suffering ‘victims’ along with their British cousins. However, it strikes me that the difference is that they are unified, whereas our football watching experience is becoming more isolated.

Rightly or wrongly, it’s often claimed that the Premier League is the most entertaining in the world, but the price we’re paying is that our football communities are dissolving as over-priced ticketing is creating a generation of television football spectators and the comparably low pricing and accessibility created by the likes of Sky has now seen more people watch from the comfort of their own homes instead of a local pub or sports club. It’s also not uncommon for a family to be watching the match in separate rooms of the home these days, except for young Timothy of course, who’s actually watching on his iPhone as he’s dividing his attention between the match and other activities somewhere in the city centre.

Community growth is a shared ethos within members of these North American Premier League supporters groups. At the start English football may have brought people together over that shared love and it created a hub for making friends with a mutual interest, but I heard examples where it was clearly much more important, such as the groups seeing people being supported through mental illness, joining in fundraising efforts to tackle issues such as homelessness and working together when campaigning against racism and homophobia in the sport. Romances have also blossomed between fans and supporters have become more active through playing the sport with regular tournaments within and against supporters clubs, which in turn has also led to connecting with their rival fans in an even wider football community. Could we still have this in the UK? I have my doubts – as Sky makes it more affordable to watch in the home, pubs and sports clubs have to shell out as much as £15,000 per year for a subscription (see The Telegraph for more) and that outlay is far too much for many establishments that opt against creating a hub for the shared spectating experience. Sky is more than okay with that and actually I’d take a stab in the dark and say they prefer it because inevitably they will make more from residential subscriptions if you can’t actually find anywhere to go and watch the game…

So, back to the Red Bull Arena…

My British pal and I decided to abandon our £15.00 seats for the second half and join a bank of fans behind the goal who are trying their best to create an atmosphere than would emulate The Kop at Anfield. After our initial spell of ridiculing all that went on around us, an admiration for these fans grew as they strived for authenticity and were seemingly having a great time in trying to achieve this. When joining the ‘die-hards’ we got a new found appreciation for those who have gathered to support their local club and found each other in doing so. ‘Love the club, hate the brand’ is on the back of one supporter’s t-shirt, which acts a middle finger up to the hierarchy. Does this supporter have incredible foresight in predicting that the energy drink powers that be will increase prices and over-commercialise their working man’s sport? I suspect that’s the case; in these football communities I’ve immersed myself in, members watch wall-to-wall European football from as early as 4am on the west coast and command a knowledgeable insight on their adopted clubs who they love just as much as their local MLS team, who they’ll trot off to watch at 7.30pm. These fans understand the game’s politics and they’ll refer to the impact of their fellow North Americans at the helm of Manchester United and Arsenal as examples they do not want their MLS clubs to follow. Such events would lead to that ‘business first, let’s up the price’ attitude and act as the firing gun that sees their live spectating communities being slowly dismembered like ours in the UK where more and more fans are priced out of attending matches. Upon meeting some Portland Timbers fans later on my trip I realised that it would be even more heartbreaking if their club fell into the hands of a fat cat, especially as they branch into the wider community and do such admirable work. 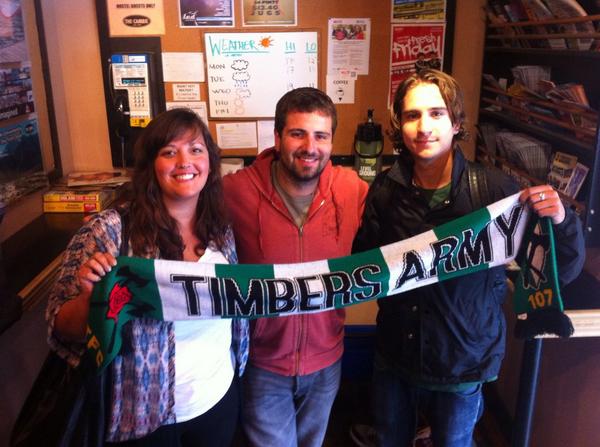 Speaking with Timbers Army fans Lindsay and Alex at a hostel in Vancouver, Canada, I found that their supporters club is set up as a non-profit organisation that prides itself on being a non-discriminatory group for passionate fans who also want to make a difference in their home city. In recent years they’ve hosted fundraising events to raise money for local causes, donated sports kits and school uniforms to low-income families, re-laid and maintained Portland’s sports pitches and funded the training and development of young footballers from working class backgrounds. One such benefactor is Rubio Rubin, now 18 years old, who eventually signed for Portland Timbers before moving to FC Utrecht in the Netherlands and making his USA debut this year. In a league where there’s no youth football infrastructure, the reliance on college football scholarships and training academies for player development is crucial for the growth of the national team, but so many players from low-income backgrounds, including many from the country’s immigrant population, hit a glass ceiling due to financial restrictions. The fact that these fans have enabled a young footballer from their hometown to attend the prestigious Bradenton training camp in Florida is truly staggering. It’s strength by unity which is born out of affordable pricing – let’s hope these MLS clubs steer clear of a Glazer or a Kroenke. Prices go up, fans stop going to the game, a community and all the benefits that brings is killed off. Sound familiar?

In North America the ‘soccer fan’ is its very own subculture, like the Goth of sports fans who is misunderstood by their family members. Perhaps the examples of unity on show are born out of this adversity and nothing more, but when watching football in North America you can’t help but wonder whether we are losing out on what was traditionally a shared experience as the way we consume football in the UK continues to evolve, taking more of us down a lonely road as it does so. Sure, our league may be more exciting to watch and harder to mock but I for one wouldn’t mind sacrificing some entertainment and credibility for a little more togetherness.

Debate: Is our football spectator experience in the UK dying a death? Comment below…