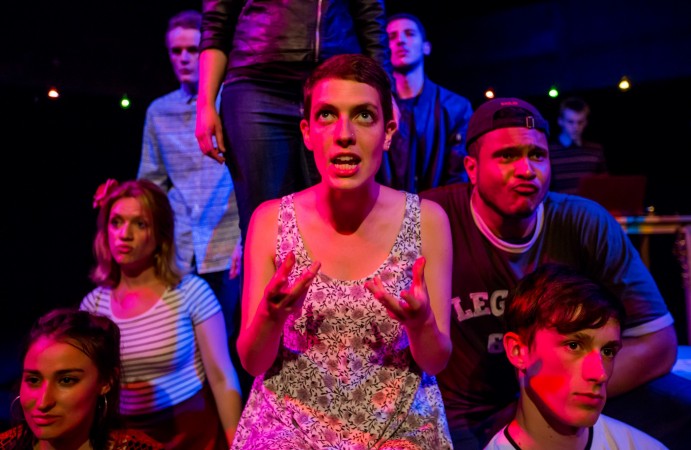 Spill, the product of Propolis Theatre, springs forth from fertile ground. Sex is a rich topic, used extensively for comedic, tragic or horrific effect, and this year’s Made In Bristol troupe have done well to craft a show of novelty and originality from it.

With a verbatim script taken from 20 interviews with 32 people, this is a show which relies on the authenticity of the tales, an authenticity which is backed up by the robust acting of the 11-strong cast. From Elana Binysh’s monologue on asexuality to Fabien Mokhtari’s streetwise lad getting laid every night and Faye Bishop’s filthy lass, this is cast who are celebrating not just sex, but their graduation from the Made In Bristol programme. They bring the transcripts to life with nuance, skill and energy.

What prevents this show from becoming a one-dimensional passage of sexual exploration is the incredible variety of characters on show. The cast are to be commended – for it is they who found and interviewed those whose voices are on show – and Spill represents heterosexual and homosexual, pansexual and asexual, virgin and non-virgin and, most superbly of all, transgender – played dually by Dale Thrupp and Maisie Newman.

Beyond the honesty of the script, there is real humour – the line “two wanks, an egg sandwich and I’m ready for the world” will live long in the memory – and plenty of belly laughs. Fantasy places to have sex range from a French meadow to Buckingham Palace and Cabot Circus. However, elsewhere lies melancholy, and even grimness, as with the case of a couple of tales of almost-rape. The script is crafted to allow space for more than one emotion to breathe.

When The Fix last saw this Made In Bristol crew, it was aboard their SS Great Britain Halloween ham-up Spooky Ship. It is fantastic to see how far they have come since that endeavour. Spill is not a fine show just be developmental theatre standards, but by any standards.