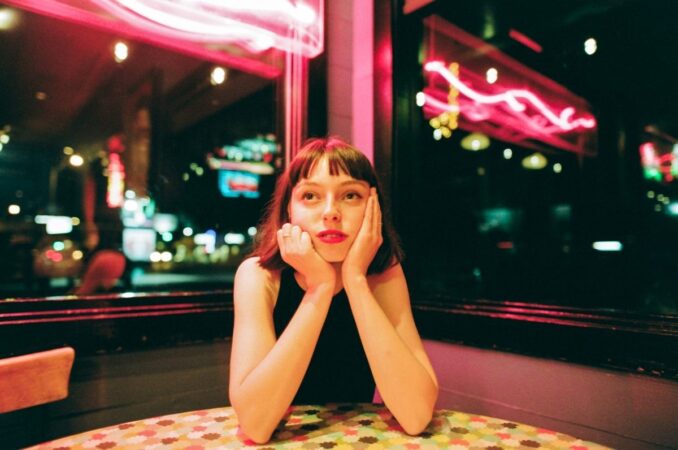 Seven tunes into tonight’s nine song opening slot for Australian indie rock outfit Rolling Blackouts Coastal Fever, fellow Aussie Stella Donnelly admits “this is something a support act should never do” before soliciting the audience to provide call and response vocals to an as yet unreleased track (perhaps to be titled ‘How Was Your Day?’). By this point in Donnelly’s set, it already feels like a moot point. As with her previous visit to Bristol in 2019, the Perth-based singer-songwriter has quickly proved her abundant gifts as a performer: solid tunes, a comedian-like ease with repartee between songs, and an unfailing sense of loving every moment on stage; the audience duly assent to her request.

Having dispensed with the hair straighteners and now sporting a frizzy, curly mane, while clad in a spacious, green-tinged pinstripe suit, Donnelly cuts a somewhat altered presence since her Thekla show three years ago. Everything else – the aforementioned gifts and her palpable charisma – remain fully intact. Opener ‘You Owe Me’, a caustically sweet, fingerpicked message to a former boss, sees her reference “Flat VB” before a nicely executed mid-verse explanatory adlib “it’s a shit Australian beer.”

In introduction to ‘Beware of the Dogs’, the title track from her well-received 2019 debut album, Donnelly describes how the song was written as a frustrated critique of the Australian government at the time. However, with the recent election victory of ALP candidate Anthony Albanese, she jokes that performing the song will now require her to “pull grumpiness out of my ass.”

After Donnelly’s band enters the stage three tunes in, she stops to observe that she’s already sang the word “fuck” so many times and promises that the offending lyric doesn’t appear anywhere else in the set. She then declares “anyway, this is a new song” before serving up the deftly timed punchline “it’s called ‘Fuck’”. As it goes, the song is actually called ‘Flood’, the title track from her soon to be released – 26th August to be precise – sophomore record. It offers a fairly rare sighting of Donnelly sat at a keyboard and it features a sweetly melodic chorus that bodes well for the upcoming album.

‘Old Man’ contains the scolding #metoo era sentiments that permeate Beware of the Dogs (the lyric “You grabbed me with an open hand/The world is grabbing back at you” is the devastating riposte of a world in reckoning). Something sounds awry with Donnelly’s rapid, chopping chords of the song’s intro and the laughing apologia across to her bassist confirms the misstep; somehow it only serves to increase one’s sense of how much enjoyment Donnelly garners from live performance.

‘Die’, as with previous performances, features a goofy dance routine. It’s conscious corniness in action; Donnelly and her bassist cup their chest and march on the spot, there are expressive arm movements and mimed rope pulls before Donnelly’s ankles are grabbed after she executes a headstand. The fun continues in final song ‘Tricks’; Donnelly laughs as her guitarist improvises an apparently rogue experiment with his delay pedal; subsequently, she ends up playing chords while lying on her back and kicking her legs into the air.

Support acts probably shouldn’t be this good. In fact, Donnelly’s late set remark that the audience should “make sure to stick around for Rolling Blackouts Coastal Fever” lands as less of a joke than intended. The difference between the tepid response when entering the stage and resounding applause upon her departure says it all; Donnelly has won over a large room in little over thirty minutes.