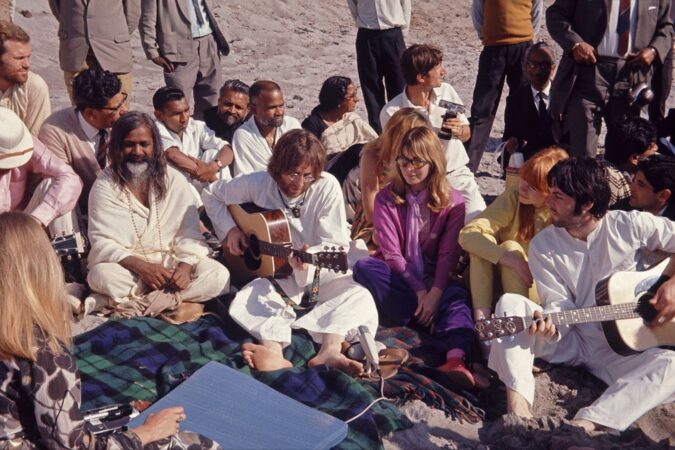 While filming 1965 film ‘Help!’, George Harrison picked up a sitar being used by musicians in a restaurant scene and thus began The Beatles guitarist’s life encompassing obsession with Indian music, and Indian culture in general. By the end of that year, Harrison was using the instrument to form the main hook of ‘Norwegian Wood’ – the first use of a sitar on a commercial record in the West – and India was to be significantly entwined within The Fab Four’s story for the next three years.

Ajoy Bose’s enjoyable – though not exactly essential – chronicle lays out this period with archive footage and photographs, merging depictions of the ashram then and now, historical interviews from the key players, and contemporary talking heads which, for the most part, refreshingly deliver the Indian perspective on a well-trodden narrative.

Fans will already be familiar with the basic story which culminated in The Beatles’ sojourn to study Transcendental Meditation with the Maharishi Mahesh Yogi in the ashrams of Rishikesh – a beautiful location in the foothills of the Himalayas – in early 1968; after Harrison’s bonding with Ravi Shankar in 1966 (a connection “like wildfire” we hear Shankar describe), the youngest Beatle introduced Indian flavours – and entire tracks – into the formidable canon of songs; reeling from the untimely death of Brian Epstein during their first trip to see the Maharishi in Bangor in the summer of ’67, and failing to find spiritual meaning after a period of heavy drug use, The Beatles were at a crossroads. With the band unmoored and seeking answers, the Maharishi found himself as guru – albeit temporarily – to the biggest pop cultural phenomenon in the Western world.

Despite the familiarity of all the above, there are enough subtle disclosures to make this an engaging 90 minutes of documentary film. It’s amusing to hear of a whole Indian family delivering a replacement sitar string to Abbey Road after Ringo put in an SOS to a local music store. There are a couple of John Lennon soundbites – his fulminating against the band’s “cop out” in accepting MBEs and his describing Rishikesh as “one of the happiest times in my life” – that may have previously escaped many fans.

Also, the testimony of locals – staff, journalists, photographers working in the ashram – offers a rare outsider’s view of the individual Beatles; Lennon is praised for his sense of humour in one instance, while another declares him a “serious human being, not very talkative.” Meanwhile, some of the familiar things are definitely worth hearing again; spice adverse Ringo’s decision to bring two suitcases to India– one for clothing, the other for tins of Heinz Baked Beans – is always an amusing detail.

The film is most illuminating in its occasional delving into the motivations and makeup of the Maharishi, and in turn The Beatles’ naïve alacrity in embracing him. We hear a news reporter quoting the Maharishi to the effect that his brand of peace of mind can only be appreciated by those with “rewarding activities and high income”. Journalist Saeed Navqi describes the guru’s teachings as “gibberish” and “unintelligible” right before a revealing shot of a newspaper advert asserting that followers can learn techniques such as levitation and invisibility. The documentary also sketches out the reasons why The Beatles should perhaps have been dubious – for instance, his pushing for TV appearances with the band without prior consultation – although Paul McCartney, in a 2001 interview with Charlie Rose, declares that the Maharishi was the real deal and not “about Rolls Royces and chicks”.

Elsewhere, the film throws up the claims of conspiracy that the ashram was being used as a base for CIA led espionage. This section is short and unsatisfying – though it has the ring of a 9/11 truther-esque mindset, it would perhaps make an interesting film in itself – but it does feature a highlight moment where acerbic KGB agent Yuri Bezmenov dismisses the activities of the ashram and pours scorn on “Mia Farrow and other useful idiots from Hollywood.”

The Beatles took the world by storm in 1964-65 and India was no exception; we hear from surviving members of Beatle-esque band the Savages, and a clip from 1965 film ‘Janwar’ sees Shammi Kapoor horsing about in a mop-top wig. The Beatles in turn embraced India and the influence it had on their music – particularly in the fecund period of composition during their time in Rishikesh – shouldn’t be underestimated. In an age where the concept of cultural appropriation has largely become a point-scoring, societal nonsense, the film’s greatest strength is as a feel-good document of a cultural cross-pollination that – even if just for a moment – seemed to make the world a more united place.

The Beatles and India is available for streaming now. For more information visit the film’s official website.