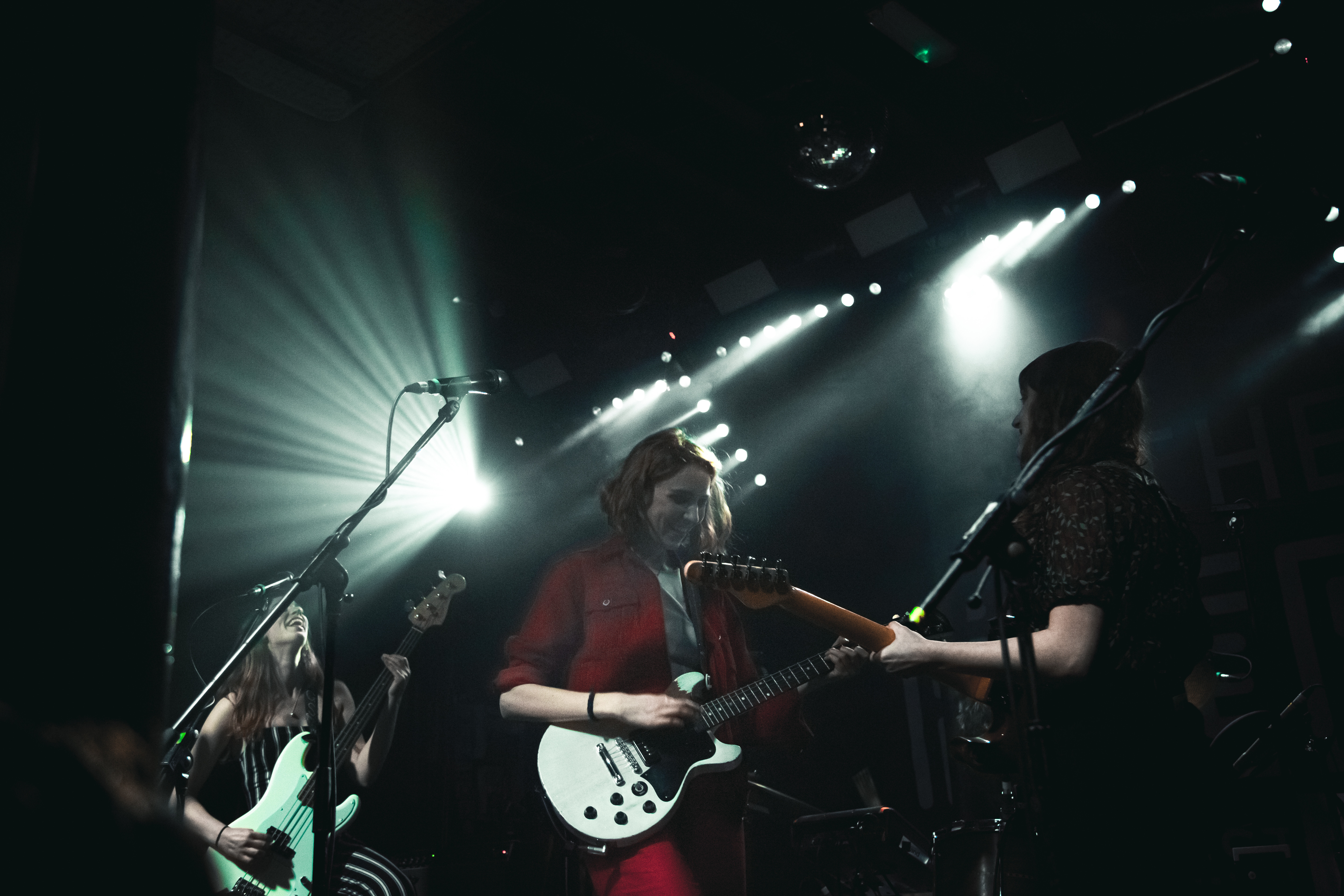 Fresh from completing their supporting role on Bombay Bicycle Club’s recent UK tour, in addition to a series of dates in support of Pixies during their European dates in 2019, tonight’s sold out show is The Big Moon’s first headline performance for nigh on two years. Despite any nerves or challenges that may arise after such a haitus between headline shows – tonight, for instance, we hear debut airings from recently released sophomore record Walking Like We Do – these support slots have evidently fashioned the London four-piece into a dynamic, well-honed indie rock unit.

“It’s nice to be in a room of people who just came to see us” says bassist Celia Archer in introduction to the radio friendly indie pop of ‘Take a Piece.’ In addition to the band’s staple set up of two guitars, bass and drums, the song utilises pre-programmed keyboard loops and perhaps best captures the new album’s poppier diversion from the post-Libertines indie rock of Mercury Prize nominated debut Love in the 4th Dimension. However, in moments such as frontwoman Jules Jackson repeatedly striking the back of her guitar to prolong feedback at the song’s coda, the context of live performance renders the newer tracks with a slightly less poppy hue.

Though lead guitarist Soph Nathann expresses to the soundman, four songs in, that her rampant guitar sound needs to be “cranked down a little,” the main joy in tonight’s performance is just how sonically dynamic the relationship is between instruments and vocals. ‘Silent Movie Susie’ is a crisp and spirited three pronged salvo of grungy guitar chords, Jackson’s seductive lead vocal and attractive “whoo ooh ooh” backing harmonies. Despite its being played for the first time in two years and Archer’s call to “wish us luck!”, ‘Pull The Other One’ shows no signs of rust at all while Archer and Nathann’s harmonies sound crystal clear above the euphoric surge of indie rock.

Surprisingly for a relatively boisterous act like The Big Moon, Jackson’s excellent lead vocals can be lyrically deciphered with little effort and fit snugly around the three and four part harmonies of her bandmates. This is best exampled in ‘The Waves’, a keyboard-led flagwaver in which the sparkling harmonies merge into a pretty crowd singalong of the “You had me goin’ for a minute there” finale.

The very first performance of ‘Holy Roller’ (Bristol are “gineau pigs tonight”, as Asher asserts) is a fine slice of  moody electro pop which sees drummer Fern Ford switch to an electronic kit. Further adding to the fun, Ford provides a blast of trumpet before resuming drum duties on ‘It’s Easy Then’ and later there’s a quirky respite whereby Jackson and Asher perform an interlude of duelling flutes.

After Asher declares to the audience that “you can now dance all the way to the end of the set”, the set sprints to a close with volley of upbeat songs. There’s an energetic cover of Fat Boy Slim’s ‘Praise You’, the soaring punk-lite of ‘Bonfire’ and old favourite ‘Cupid’ (which features the ingenious male ego puncturing lyric “He said, ‘I’m gonna make the Earth shake tonight’/Pineapple juice, tropical Rubicon courage.”)

After emerging from a couple of years in the supporting slot shadows, tonight has been an emphatic return to headliner status.