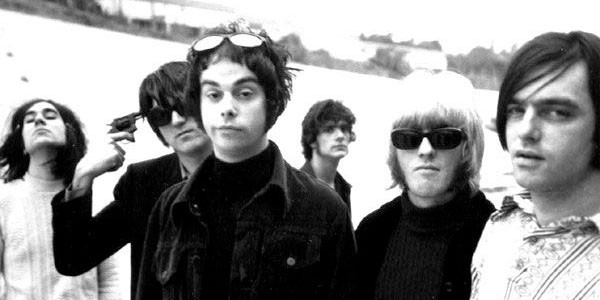 It was a recent viewing of the excellent documentary Dig! that led me to the broiling Saturday evening atmosphere of the cult psychedelic rock band’s appearance at Bierkeller. Some of what was thrown up in Ondi Timoner’s 2004 film, namely some charmingly retro rock n roll tunes and a band – fronted by an egotistical and enigmatic heroin addict – prone to sometimes violent internecine squabbles, proved an irresistible prospect ahead of tonight’s sold out show.

Of course, Dig! followed the Brian Jonestown Massacre over the course of a seven year period and was no doubt edited around a pronounced narrative of intra-band dysfunction and onstage fisticuffs. Also, these are more settled times for a band now boasting a largely different line up from the period covered in Timoner’s film; alas, tonight’s show is free from any spectacular fratricidal fireworks but, in kinship with the likely expectations of many fans present, isn’t completely devoid of incident either.

Now sporting huge grey mutton chop sideburns along with black-rimmed spectacles that give a vague appearance of Jarvis Cocker, frontman and main songwriter Anton Newcombe takes a photograph of the audience on his phone before the band opens up with the relentless two chord jangle of the Velvet Underground flavoured ‘Never Ever’. ‘Vad Hande Med Dem’ (its title no doubt a product of Newcombe’s settled, heroin-free life of marriage and fatherhood in Berlin) surges with a looping chord structure and piercing guitar shrieks. Meanwhile ‘Who?’ is enthusiastically greeted by the audience who then follow Newcombe’s scruffy reverbed licks by joining in with the song’s boisterous cries of “Woo!”

The atmosphere among the audience brims with a sense of cultish adoration and beseeching cries of “Anton!” are sporadically noted. However, such is the vastness of the group’s catalogue (songs spanning fourteen albums, three of which were incredibly released in a single year during 1996), seemingly devoted followers come up empty after my attempts to procure track titles early on. A gentleman who was attending his twentieth BJM gig and another who alluded to his attendance at the band’s Liverpool show four nights previous, both draw a blank.

With a general setup of three guitars, drums, bass and keyboards, the band plough through the now customary two and a half hour set duration, taking in 24 tracks. Following a repeating formula of strummed chord structures, Newcombe’s simple and scruffy leads and the circling, repetitious mantra of their instrumental interludes, The Brian Jonestown Massacre arguably don’t have the variance of sound for such a sprawling set to be appreciated outside of the rank of die-hard fan.

However, a curiously stagnant intensity pervades the execution of their songs and there are some notable highlights: ‘Jennifer’ is a pleasingly melodic three way guitar jangle, ‘What You Isn’t’ is a visceral slab of stomping rock and Newcombe’s Pontypridd born wife Katie and sister join onstage to deliver the vocals of ‘Pish’.

There’s a quick glimpse of the tyrannical band leader of Dig! when Newcombe puts an early end to ‘Servo’ while berating his bandmates about the looseness of their playing. Elsewhere, the sighting of a shirtless fan being marched off the premises by security is soon explained when it comes to light that tambourine player Joel Gion has been spat at; Newcombe, now so drenched in sweat as to render his white shirt see-through and tattoos visible, responds by collectively attacking the audience with an acerbic “fuck you”.

For the record, Gion’s now iconic role as tambourine and occasional maraca player is a curious and rather pointless one; rather than an animated, Bez-like cheerleader for his band, Gion largely cuts a perfunctory figure of stagnant boredom.

With sets so enduring, shows such as this can only really be fully enjoyed by dedicated fans already invested in the group’s legend and enduring cult status. Such is the clear audience appreciation that greets the close of tonight’s show, this is something that need not be of concern for The Brian Jonestown Massacre.