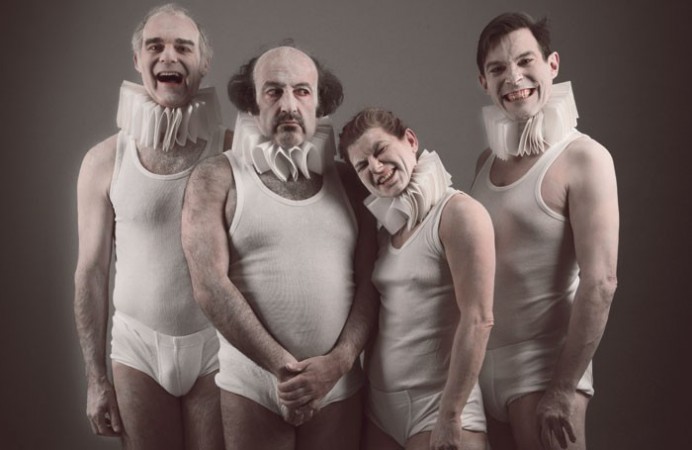 The premise of this new production from Spymonkey was certainly an irresistible one: In commemoration of the 400 years since the Bard of Avon shuffled off this mortal coil, the Brighton based physical comedy troupe would take all 75 deaths from Shakespeare’s 37 plays and interpret every one of them in a dizzying two hours of theatre. While a show that easily contains enough of the playwright’s ingenious dialogue to act as a faithful – though ultra-condensed – reprise for enthusiasts, the consistent success of its humour also makes for a hugely entertaining experience for those of us among the largely uninitiated.

The Performers are Stephen Kreiss, Aitor Basauri, Petra Massey and Tony Park; the latter – intermittently playing the role of Shakespeare scholar in his analytic deconstruction of various scenes – begins by confronting the “bourgeois complacency” of the modern theatre audience and inviting us to “celebrate death”. With that, a dazzling array of costume changes, set-designs, props, shadow puppetry and a mini-cam projecting onstage action on to a big screen, take us through the entire repertoire of stabbings, drownings, suicides, poisonings and the occasional death by a kick in the balls (I’m assuming artistic license here).

Deaths from Hamlet include Polonius’ – his being stabbed “through the arras” is amusingly misunderstood as a stabbing elsewhere and Ophelia’s drowning (after an enduring argument as to its validity as an off stage death) occurs inside a zorbing ball; Julius Caesar’s Sinna The Poet’s demise at the hands of a mob is represented in figurine form, the aftermath involving paraffin and a fire extinguisher. Meanwhile, the savage murders and rapes of Titus Andronicus are brilliantly subverted by some cheerily dim-witted slapstick and each of the actors merrily plunging into a giant mincing machine.

There are some very funny moments when the actors break character and make digressions into the drama of their “real” lives; with a camera rolling backstage, a confession of affection from Stephan to Petra is undermined with the puerile but nonetheless hilarious visage of an overweight arse in the background. Aitor’s occasional encounters with the talking head of Shakespeare culminate in a hilarious moment when the Bard suddenly appears utterly aghast following a camp sequence – featuring bag pipes, silly dancing, pronounced Scottish accents and penises both real and fake – portraying a series of slayings in Macbeth.

The set pieces are executed adroitly and the comic timings of the actors rarely miss the mark; Stephan and Aitor’s native accents (German and Spanish respectively) sound refreshing within the quintessentially English context of Shakespeare and heighten the comedy. While there is an undertow of poignancy and loyal adherence to the linguistics, it is silliness that largely prevails; the talking head animation, the occasional flashes of flesh, and a back and forth face slapping scene involving Tybalt all feel like a nod to Monty Python.

Though the show does stray slightly into the overly camp – there’s a needless segment featuring Stephan in a clown suit and Aitor blowing bubbles while adorned in ludicrous multi-coloured spandex – the comedy lands consistently and makes for a very entertaining 120 minutes. A brilliant idea pulled off with aplomb.