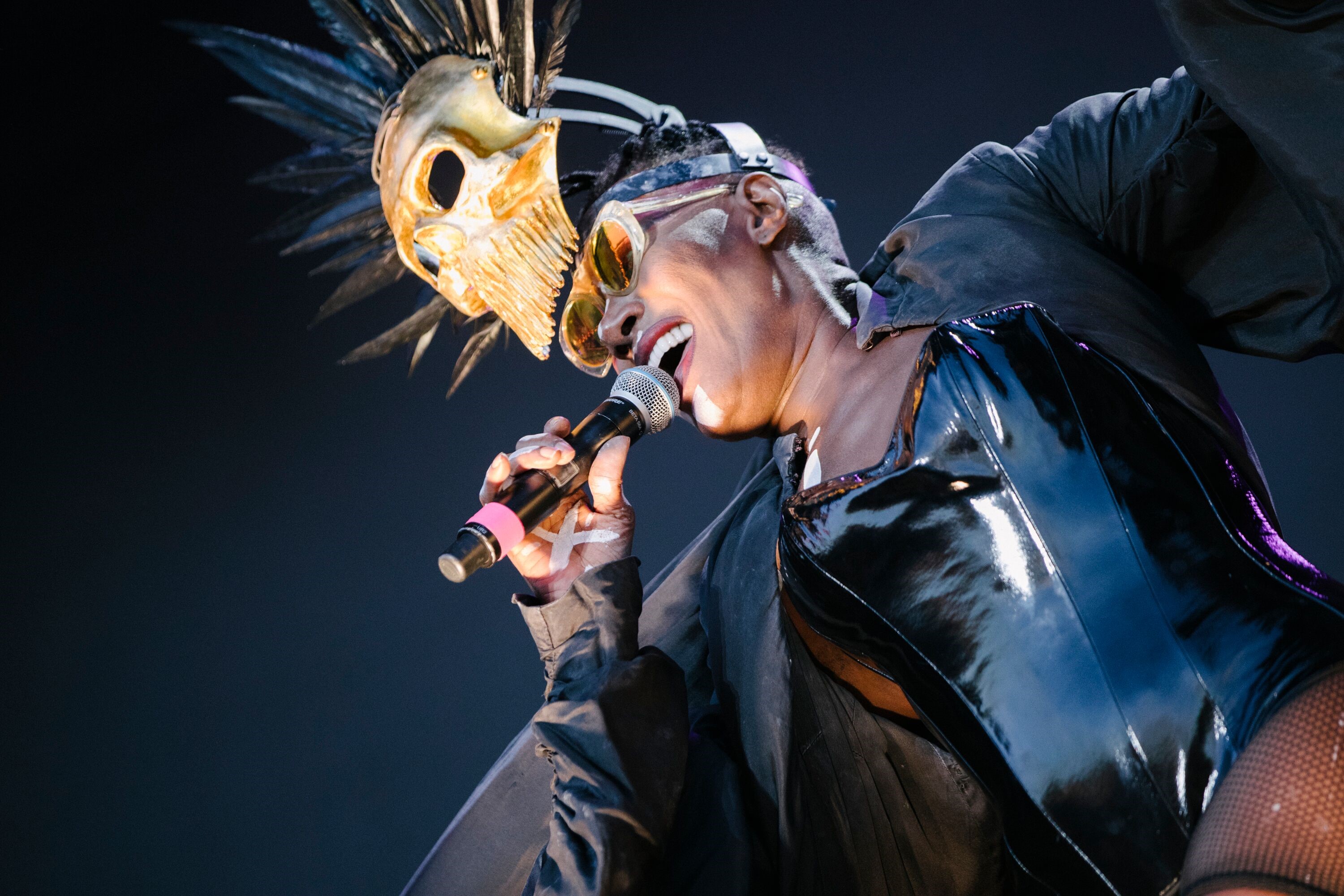 After an ominous mid-morning downpour which may have given PTSD flashbacks to those with memories of near death-by-drowning at the festival’s inaugural washout of 2016 , the late August sunshine combined with a pleasurable breeze make it near perfect festival conditions upon arriving on site at 3pm.While queuing to enter into the festivities, I observe that the nascent reveller ahead of me is having his backpack removed of an item of fruit. I’m all for tight security but Banksy’s bananas as guns ‘Pulp Fiction’ piece appears to have infused the guard in question with a dubious paranoia that the gentleman in front of me may well use his contraband Fyffe to pop a cap in someone’s behind.

After a hopeless sprint to catch a DC Fontaines set that ended about 3 minutes before press bands were even attached to wrists, we prep for Neneh Cherry’s 4pm set with delicious 440ml cans of lager at £5 a pop. Having not taken notice of the Swedish singer-songwriter since her late 80s/early 90s commercial prime, Cherry – sporting a frizzy and impossibly lengthy mane of hair along with an outfit somewhere between jumpsuit and sleeping bag – is a nostalgically reassuring presence to reside over the warmup stages of this year’s event.

‘Woman’ happily reaches into the recesses of memory with its seductively dark timbre while a performance of ‘7 Seconds’ leads to a hapless interrogation between myself and my equally unformed brethren as to who exactly was that African geezer that appeared alongside her on the 1994 hit. From the wide-of-the-mark guesswork that Cherry actually duetted with the abstract concept of a Pavarotti song (‘Nessun Dorma’), we eventually arrive – via some excellently flawed enunciations of so audaciously foreign sounding a name – at Youssou N’Dour. ‘Buffalo Stance’, in its singalong familiarity, is a fine set closer. 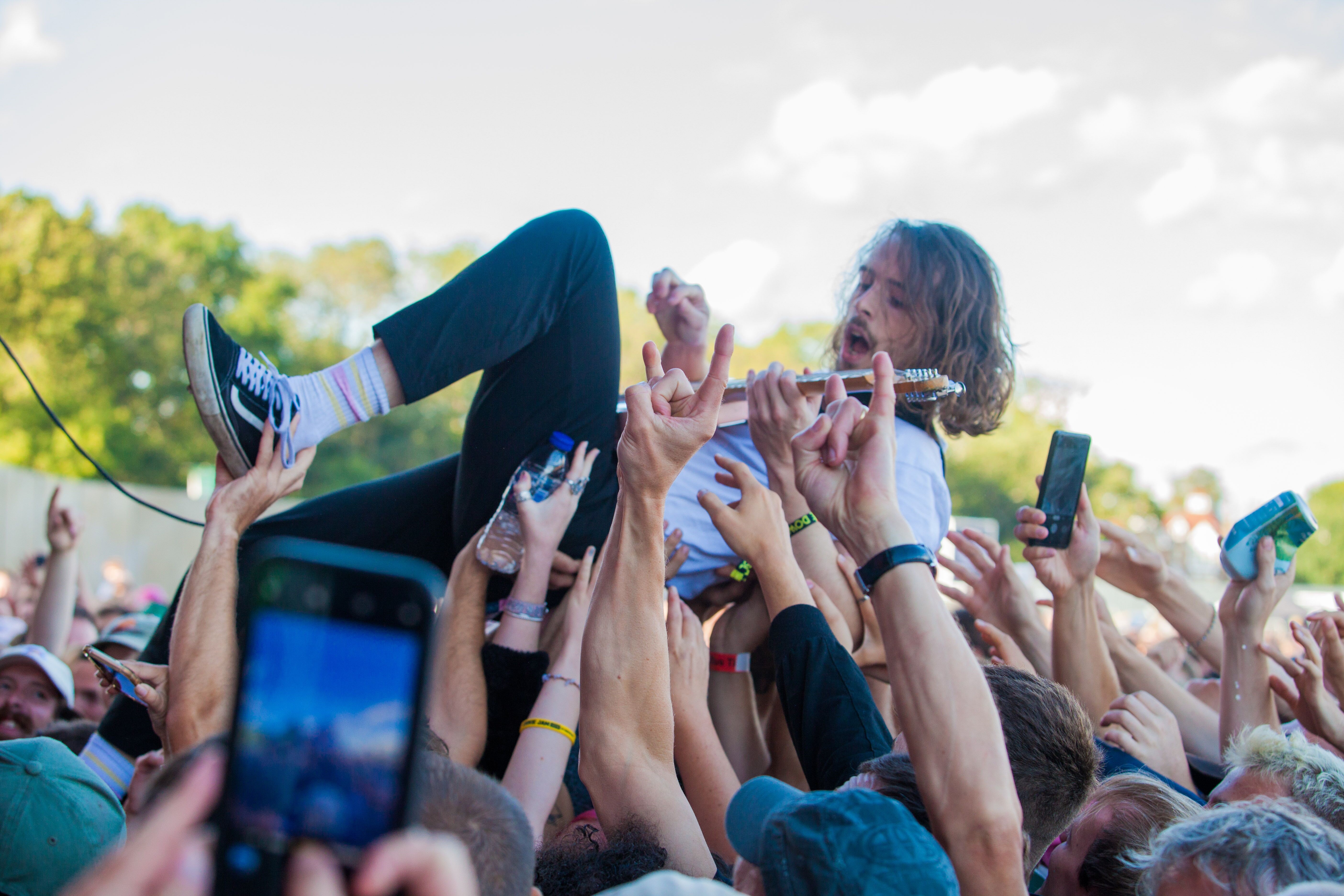 It’s been a huge 12 months for hometown punk rock heroes Idles – celebrated Glastonbury set, Mercury Prize nomination for sophomore record Joy As An Act of Resistance – and the local love has been manifest in the sighting of ubiquitous band tees across Durdham Downs. Their 5.30pm set begins with an aborted ‘Love Song’ though it’s unclear whether it’s a brief sound check or a signalling of sound issues. Things soon shift into gear though as the ‘Concrete to Leather’ refrain of the ingeniously titled ‘Never Fight A Man with a Perm’ gets Idles aficionados chanting.

It appears that Idles fans are inordinately sceptical or intrigued by my notepad and this leads to some interactions, ranging from salubrious to slightly scary. One affable fan suggests I approach a nearby bastion of all that is Idles in order to obtain a stray song title. My request for the song that I eventually learn is ‘Samaritans’ is met with the reassuringly retro diss of “your Mum”. A tad ironic when one thinks about it.

Idles wear their political heart on their sleeve and frontman Joe Talbot takes the recurring intro of “this is an anti-facist song” into something of a running joke. As to be expected, underpants wearing guitarist Mark Bowen ends up in the audience multiple times, a youngster from the crowd is invited up to play drums during ‘Love Song’ and ‘Danny Nadelko’ see the eponymous hero from local band Heavy Lungs join on stage. Talbot executes a rant out the “hateful policies” of the Conservatives before declaring “don’t read The Sun, it will give you cancer” in introducing closing song ‘Rottweiller.’ Rumour has it that he’s still a tad bitter about the tabloid paper’s 2015 decision to forgo its gratuitous norkfest on page 3.

The 7pm set by Grace Jones is an enchanting live experience lying somewhere between gig, theatre performance and Amsterdam bondage dungeon. The veteran singer, model and actress arrives on stage donning a bizarre skull and spiky hair headgear, flowing black gown and tights as she kicks off with Iggy Pop’s ‘Nightclubbing’. The theatrical element comes in the form of myriad costume changes which see the amazing Grace transmogrify from menacing hedgehog/medussa combo to chainmail tribeswoman to a dramatic moment where the removal of headgear reveals a long, silvery blonde wig.

It’s a spectacular performance in all its decadence and, following a bout of high fives for audience members in the front row, she closes with ‘Slave to the Rhythm’; though the song extends into a prolonged jam, Jones maintain her signature hula-hoop spot for the full duration and thus reveals the healthiest septuagenarian hips in Christendom. 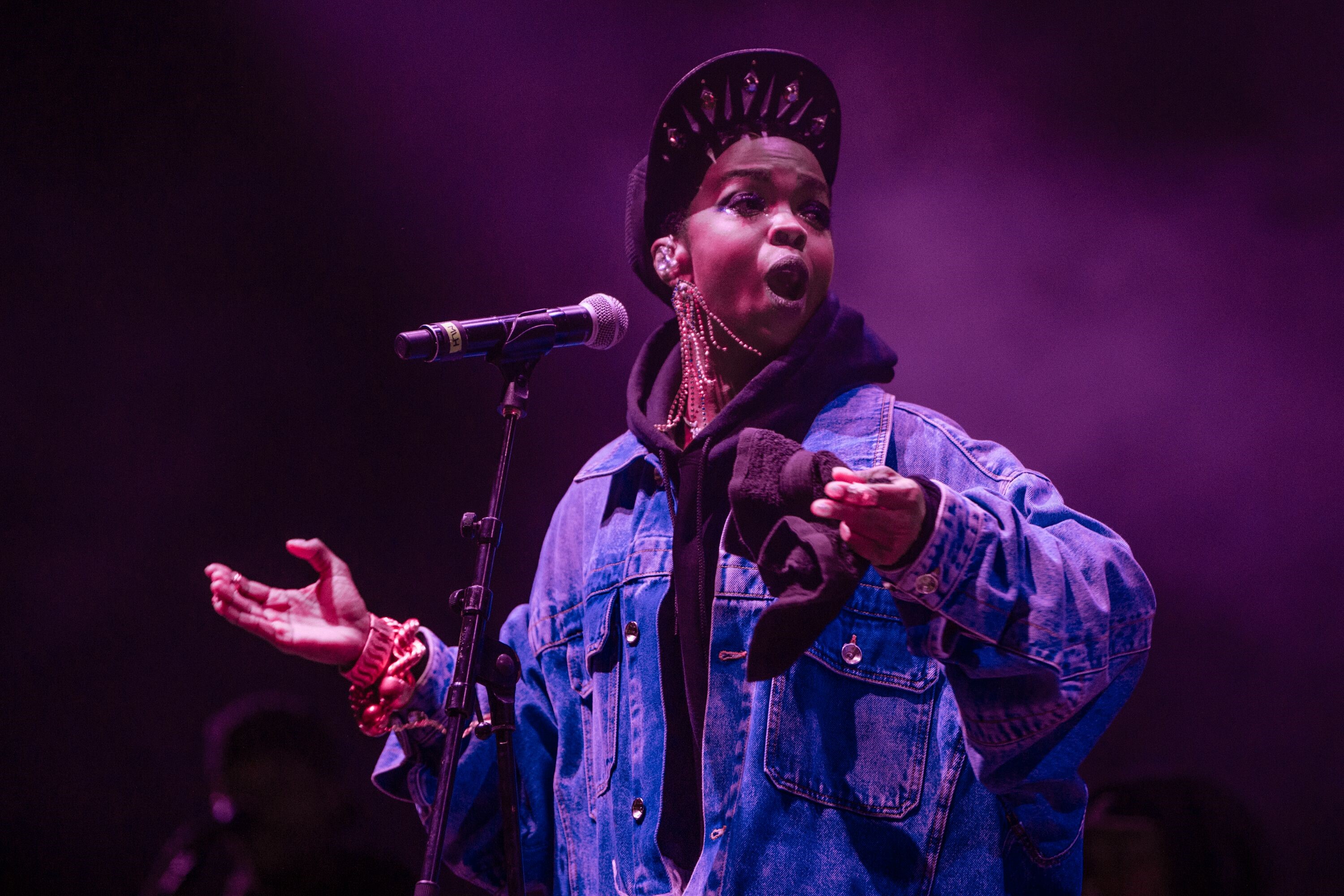 Now deep into Saturday night debauchery, it’s unfortunate that 24 year old hip-hop maestro Loyle Carner is the first real victim of some shoddy journalistic coverage. He’s already into ‘Loose Ends’ as I arrive at the Avon Stage and the lyric “In love, when the going is tough/I wait ’til it falls on deaf ears” somehow seems an apposite expression of my boozy euphoria and why-not-turn-up-mid-way-through-the-set tardiness.

Carner joins in with the prevailing anti-Tory sentiments by declaring “fuck Boris” and he later thanks the enthusiastic crowd for “the big love”. The stage is decked out a little like a cosy living room and three framed football jerseys hang above Carner, his live bassist and a third musician wielding Carner’s adroit instrumental arrangements from a set of turntables. The sultry sax at the intro to the excellent ‘Ain’t Nothing Changed’ signals a set highlight smoother than a freshly shaven sack.

The fact that headliner Lauryn Hill perhaps has experienced a similar sense of booze-infused lack of punctuality results in the happy accident that one can still catch the former Fugees’ full appearance on the main stage. Sporting a baseball cap, denim jacket and a level of bling-tastic BA Baracus earrings, Hill performs a well-received set of tunes largely from celebrated 1998 album The Miseducation of Lauryn Hill and her time in The Fugees.

Before ‘Ex Factor’, Hill declares her reverence for the classic sounds of artists such as Curtis Mayfield and Stevie Wonder and following ‘Can’t Take My Eyes Off Of You’ she compares herself – due to her siring six whole children – to The Old Woman in the Shoe. She then embarks on a fairly lengthy state-of-the-world spiel and urges some questionable new-agey advice that, in order to improve the world, we need to “raise the vibrations of the planet by a million.” Unfortunately, Hill forgoes any instructional details.

The fourth year of The Downs, Bristol is brought to a winning conclusion as Hill embarks on a triumvirate of Fugees classics to close. The opening bars to ‘Killing Me Softly’ see a grown man nearly collapse into tears behind me, ‘Ooh La La La’ provides a swaying mass singalong while ‘Ready or Not’ at once breaks down to a crawl and builds to an epically prolonged finale. Hill then proceeds to shake the hands of audience members close to the stage while the mass exodus from the Downs begins. On this evidence, it promises to be an enduring staple of the Bristolian music calendar.