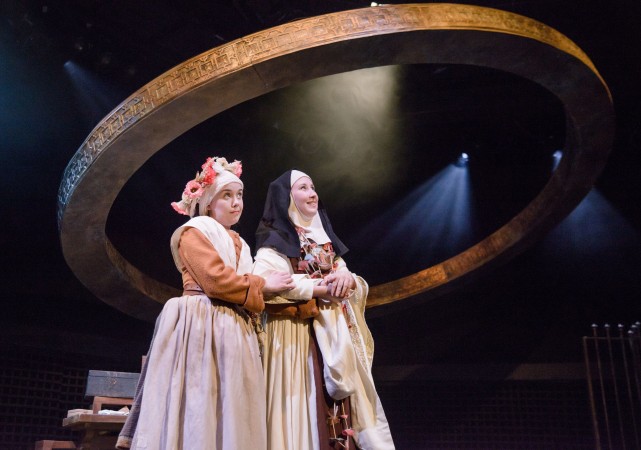 After its premiering by the RSC in early 2012, Helen Edmundson’s religious thriller ‘The Heresy of Love’ met with glowing reviews; ‘A tragedy worthy of Shakespeare’s stage’ among its most impressed plaudits. Now, under the direction of Jenny Stephens, the Bristol Old Vic Theatre School admirably tackle Edmundson’s richly textured epic that confronts a number of issues from faith’s subjugation of the human spirit, censorship, and the value of creativity.

Set in seventeenth century Mexico, or ‘New Spain’ as per its being under Spanish rule during the puritanical grip of the Inquisition, the play is based on the life of the remarkable Sister Juana Ines de la Cruz. With a precocious interest in cerebral pursuits and a savant like ability with the written word, Sister Juana was an individual of preternatural ability who sought to live an explorative life of the intellect; after learning how to read and write Latin by the age of three, she had mastered Greek logic by the time of her adolescence and began teaching Latin to children at age thirteen. Later entering the San Jeronimo Convent, Sister Juana balanced her ecclesiastical studies with the writing of plays, hymns and poetry of such repute that she became patronised by the Viceroy and Vicereine of Mexico.

Unfortunately, the secular nature of Sister Juana’s work found her heavily at odds with the pernicious doctrine of the Inquisition and the play begins by setting the scene of a newly appointed Archbishop; a stern patriarch whose unwavering adherence to dogma puts Sister Juana in the firing line upon his first hearing news of one of her plays. Despite the enjoyment delivered by Sister Juana’s creative talents, the menacing Archbishop is fiercely set on censoring such “scenes of decadence and debauchery” and abrogating anything that might represent a contradictory attitude to doctrine: “All else is vanity, if not to follow faith”. 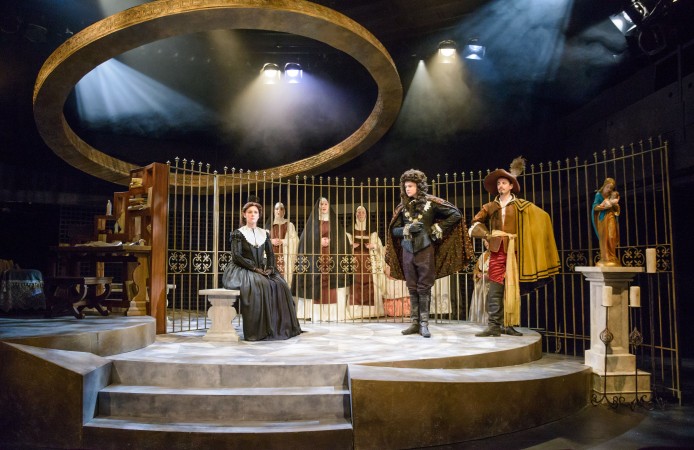 The play largely takes place within the convent; the scene brought to life by Elizabeth Rose’s set of religious statues, candles, Sister Juana’s study and a sliding grille to invoke the nun’s voluntary incarceration. Use of haunting religious song, prayers and chanting are effective devices in both embellishing the ecclesiastical atmosphere and providing bridges during changes to the set. The acting is fine throughout; the play’s lengthy duration providing ample stage time for most of the actors to deliver significant contributions. Furthermore, the use of a couple of incongruous Northern England accents within the convent, as with Sister Juana’s loyal maid Juanita, brings a lightening touch to leaven the sober deliveries elsewhere.

‘Heresy of Love’ brings several plot developments of jealousy, betrayal and pursuit of desire within the backdrop of a church and state at loggerheads. Due to the scheming of viper-in-the-nest Sister Sebastiana, the initially admiring Bishop Santa Cruz is turned against Sister Juana and revealed as a slippery plotter looking to exploit her talents to further his designs on climbing the ladder to church seniority. The vacillating Father Antonio, once encouraging of Juana’s talents but now a yes man for the merciless Archbishop, could be read as a satire on careerist politicians towing the party line for the sake of their own continuity.

Erin Doherty is terrific in her portrayal of Sister Juana; it is a performance convincingly imbued with the passions, struggles, hopes and heartbreaks that came to define her character’s existence. Also deserving of mention is the sub-plot involving Sister Juana’s niece Angelica and her courtship with the unctuous Don Hernando. Harry Egan is brilliant as the aristocratic philanderer; his exaggerated pomposity delivering welcome moments of comic relief that feel much needed within the intensity of the play’s near three hour length. His description of Angelica’s lips (“the honeyed nectar of their balm”) and his sleazily amused reaction to their first kiss (“What Joy!”) are timed expertly by Egan and draw the evening’s biggest laughs.

Through the device of its religious categorisation, the main themes of ‘The Heresy of Love’ are something fiercely secularist; the play raises the issue of religion as a barrier to true understanding (“All books are theology in a way”) and the perversity of its imposition on desire (“I wasn’t born a nun”). The play also explores the tremulous faiths of those affeared of contradictory view points and how gnostic pursuit is the real key to our understanding of the human condition. Lying at the heart of Edmundson’s densely themed drama, such provocations of thought make the show’s challenging length a worthwhile investment.