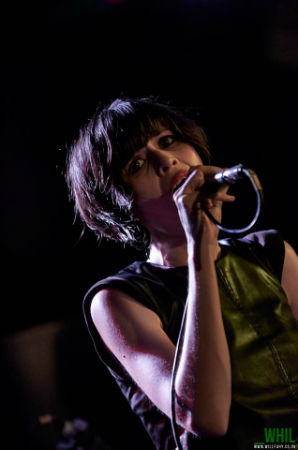 Photo by Will Fahy (www.willfahy.co.uk) Review by Kevin McGough – Sometimes all you need is a little taste of home. Well that’s certainly what many who have turned up to see Australian four-piece The Jezabels at the Fleece on a cold night in March are hoping. On arriving it’s as clear as the waters on Bondi beach that the crowd has been notably swollen by many who have exchanged sunshine, Vegemite and Neighbours for rain clouds, baked beans and Eastenders and those they have informed about the (relatively unknown in the UK at least) quality of their fellow Antipodeans. Formed in 2007, after the four of them met as students at the University of Sydney, they consist of Nik Kaloper (drums), Samuel Lockwood (lead guitar), Hayley Mary – born Hayley Frances McGlone on (lead vocals), and Heather Shannon (piano / keyboard). They are a mixed bag musically with their Facebook page describing their genre as ‘intensindie’, an echo of their hard to swallow, broken hearted disco sound. Mary has a startling and distinctive voice, with an incredible range that just ties you up in knots, and tonight is dressed in leather jacket and top which conceal an angular frame. Her big rock lips have the classic Jagger/Tyler pout but betray a serene Kate Bush/Florence and The Machine demeanor and sound which galvanizes the group. The crowd recognises everything and from the opening salvo swoon adoringly. Passionately they roar back every word for the duration of the performance. ‘Technical difficulties’ create an early stutter in proceedings but soon they are in full swing enjoying their first time in Bristol. ‘This is our cherry popping moment’ reveals Mary. While Mary skulks around the front of the stage, Lockwood bops around like an uncle at a wedding at the back – somewhat out of step with the fairly somber tone/mood of the songs. Impressive notes soar though “Long Highway”, “Rosebud” and “City Girl” from their debut LP ‘Prisoner’ and seem to get the best crowd response – ‘you prefer the old ones Bristol, hey?’ Mary notes. Rampaging drums and gritty riffs drive through “Try colour,” while “Hurt Me” reveals the band’s close-knit performing relationship. Mary and Lockwood even appear to move in a synced sidestepping motion, as if they’re warming up for a fight. By this point the devotion of some of the crowd is palpable with one man so overcome with emotion and the moment he shakes his head and wrings his hands for mercy like it’s he, not Mary, recounting the tale on stage. It’s a homecoming of sorts and by the end all feel a little closer to home. New Album “The Brink” is out now. Check them out at: www.thejezabels.com
Follow @Thefixmag
Recent Posts
We Like You…