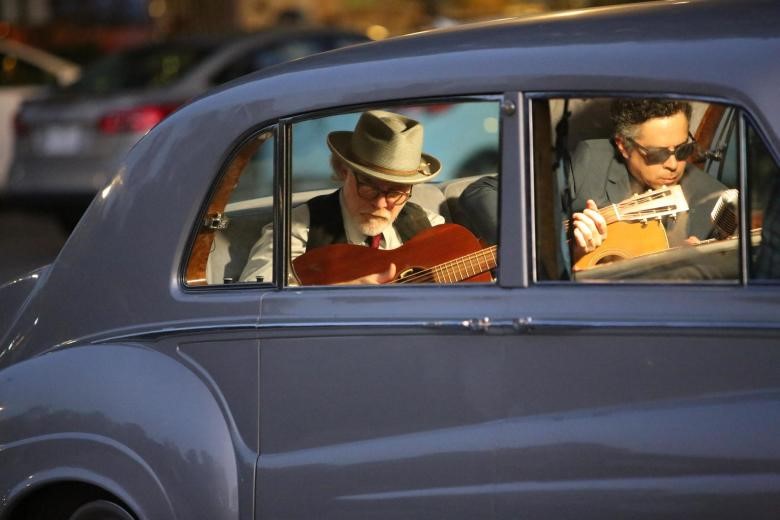 Considering that Elvis Presley is likely the most celebrated person to ever walk the Earth, yet another documentary film perambulating the well-worn terrain of his biography seems – like another Nightmare on Elm Street movie or a Rolling Stones tour – a somewhat superfluous step. However, director Eugene Jarecki (Reagan, The House I Live In) injects a fresh and fun take on the King of Rock n Roll’s story with two novel framing devices.

Firstly, by taking a road trip in Elvis’ 1963 Rolls Royce while picking up famous fans and musicians along the way and, secondly, by drawing up an allegorical parallel between Presley’s career and the destiny of the United States as a whole. The former provides the film with a varied and enjoyable combination of great musical performances, scenic American landscapes and multiple perspectives from fans. The latter sees the film embark on an ambitious, if rather erratic, thesis wherein any satisfactory answers sit too far beyond the film’s blithe approach.

Behind the wheel of Elvis’ Rolls, Jarecki goes via Tupelo to Memphis and Nashville to Las Vegas, as he explores the sites of The King’s story. He visits Mississippi State Penitentiary where we learn Elvis’ father served time for cheque fraud and – in highlighting the modern decline of Trump’s America – Memphis, where apparently 29% of residents are beneath the poverty line. There are some great performances from musicians squeezed in the vehicle’s luxurious backseats – the precocious pipes of 13 year old Emi Sunshine are certainly a highlight – and some interesting interviews from the likes of Ethan Hawke, Ashton Kutcher, The Wire creator David Simon and Alec Baldwin amusingly reacts to a mini-frenzy of through-the-car-window photo requests from fans.

The parallel drawn up between Elvis’ career and the story of America is at its most convincing when Elvis’ unprecedented level of mega-stardom is represented as entwined within the country’s capitalist boom and cultural hegemony. Also, there’s much talk of racial issues and the raising of cultural appropriation which neatly feeds the metaphor of America/Elvis’ success being unfairly built on the labour of black people. Elsewhere, it’s a metaphor that seems a bit crude and forced – there’s a concession to this as, midway through the film, Jarecki and his producer are seen discussing “What are we doing with this movie?”

It’s this question of cultural appropriation – Elvis taking the music of mostly black rock and roll performers and selling it to a white audience – that serves as the film’s most interesting debate. Political commentator Van Jones is scathing as to Elvis’ role in co-opting the music for himself and, in return, doing nothing for black America or the civil rights movement while David Simon counters that “the entire American experience is cultural appropriation” and makes reference to Elvis’ stylistic brew featuring white musicians like Bill Monroe and Hank Williams. Twenty-eight years after he sang “Elvis was a hero to most/But he never meant shit to me you see/Straight up racist that sucker was”, Public Enemy’s Chuck D offers a up a rather more sober and nuanced view.

Elsewhere, the film unavoidably covers the familiar ground of Elvis’ ludicrous decade of formulaic movie-making, Colonel Tom Parker as a nefarious “carnival barker” who kept Elvis on the treadmill for his own purposes and the prescription pill-laden tragedy of his twilight years in Vegas. We see a bloated Presley garble the spoken word interlude of ‘Are You Lonesome Tonight?’ before sitting at the piano for an impassioned and much praised performance of ‘Unchained Melody’. Both ludicrous and brilliant. Perhaps one needn’t go any further than that for allegories of Elvis Presley and the country which created him.