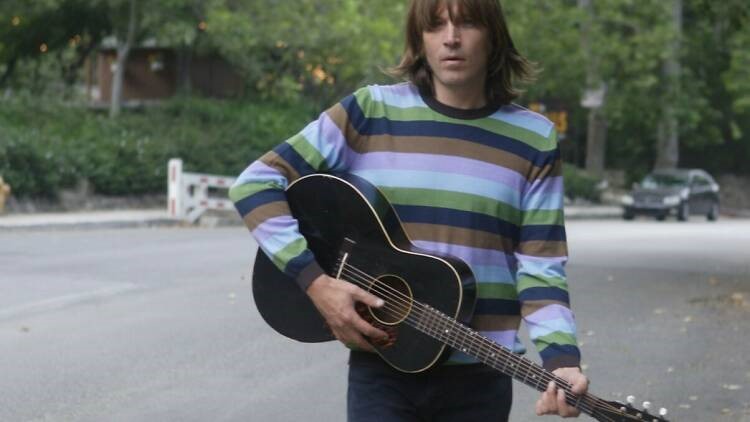 It’s been two and half decades since The Lemonheads enjoyed the pinnacle of their albeit rather modest commercial success in the 1990s – a time when frontman Evan Dando formed a hefty crack habit, befriended and collaborated with Noel Gallagher and was labelled amongst People magazine’s ‘50 Most Beautiful People.’ Considering the time that has passed since, Dando – a more weather-beaten countenance and several middle-aged pounds aside – isn’t a million miles from the inordinately chiselled rocker of yore.

Mounting the stage in baggy slacks and Gram Parsons tee, his trademark long hair covering half his face, it’s perhaps surprising how much Evan Dando looks like Evan Dando. There are early sound problems as the catchy three chord motif of ‘Hospital’ gets lost in a swampy mash of extraneous bass and there’s a couple of tracks for attuning ears before well-received old favourites ‘Great Big No’ and the hearty singalong of ‘It’s A Shame About Ray’ see Dando and his unchanging line-up of bandmates on drums, bass and lead guitar, sliding into gear.

Dando doesn’t say much aside from a few hard to decipher grumbles of audience acknowledgment, a brief attempt at assimilating himself into British culture (“You excited? Let’s talk about the football”) and can be seen intermittently drinking directly from a bottle of what looks suspiciously like Tia Maria. We hear a few songs from newly released covers album Varshons 2; Yo La Tengo’s ‘Can’t Forget’ and John Prine’s ‘Speed of the Sound of Loneliness’ reveal Dando’s general flair for interpretation.

The beginning of the acoustic section – which features a number of covers that land with varying amounts of pleasure from the audience – is perhaps the highlight of the show as the delightful ‘The Outdoor Type’ is met with an enthusiastic singalong. Dando dedicates it to someone near the front called Ellie though it appears to have been enjoyed by everyone in the packed audience.

The acoustic set offers a clearer opportunity to gauge how well Dando’s smooth, deadpan vocals have aged; the evidence of ‘Why Do You Do This To Yourself?’ (from his only solo album, 2003’s Baby I’m Bored) indicates that they’ve worn very well though he displays an exhausted expression – albeit tongue-in-cheek – when holding a lengthy note at the end of the Louvin Brothers lovely ‘When I Stop Dreaming.’ Elsewhere, the interplay of Dando’s acoustic with that of his bandmate’s electric guitar is at its prettiest during ‘Hard Drive.’

Once the band return, there’s a freewheeling and casual end of gig vibe. After a request from the audience, there’s a brief blast of ‘Hate Your Friends’ before it is abandoned and, despite Dando’s reassurance of a full version later, never reprised. Following ‘I Just Can’t Take It Anymore’, Dando pours whatever booze he has been glugging atop his head and, after convincing his fellow musicians with an “Oh yes we are” expression, there’s a version of The Eagles’ ‘Take It Easy.’

‘My Drug Buddy’ and ‘Into Your Arms’ offer two final opportunities for the audience to bellow along to their favourites before Dando induces a strangely cold egress from the stage with a casual “Right, that’s it. Let’s go.”