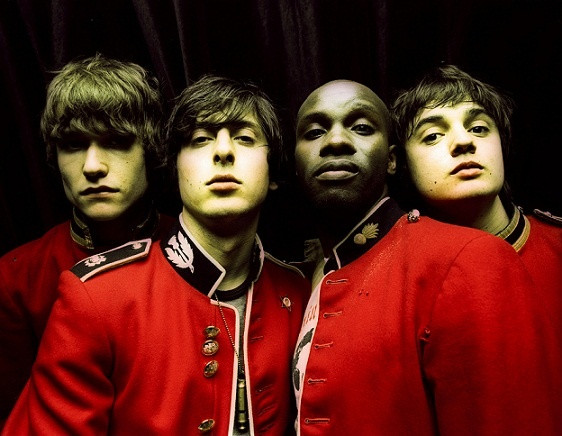 It looked like it would never happen. Last week’s announcement that The Libertines would be playing their first club dates in over a decade came at the end of a tumultuous eleven year path of acrimony, addiction, intra-band burglary, rehab, a triumphant return at Reading Festival in 2010 and a surprise appearance at Glastonbury this summer. While their reunion five years ago perhaps had the air of a band looking to cash in on a lucrative paycheque, new songs recorded in Thailand this year sees them as a truly reformed beast. So, three days before the release of third album Anthems For Doomed Youth, and in the wake of a mad online scramble for tickets, The Libertines were back in Bristol on the rarest of visits.

In spite, or perhaps because of their long periods of hiatus, no other band of the post Britpop era has come close to the enduring mythology that has surrounded The Libertines. Thus, the sound of Vera Lynn’s ‘We’ll Meet Again’ before the band hit the stage feels, rather than unnecessarily portentous, a genuinely fitting moment of anticipation. After Pete Doherty’s displaying the desultory garb of flat cap, trench coat and cigar, he opens things up with the attacking chords of ‘Horrorshow’. Somewhat predictably, drummer Gary Powell’s T-shirt lasts just one song as he dispenses with it before ‘Vertigo’, the first song of the night to feature the now iconic image of Doherty and Carl Barat sharing the same microphone.

A solid set list of favourites provides the soundtrack to the enthusiastically chaotic sway of audience activity; a shoe is thrown stagewards in the middle of ‘The Delaney’ and during the noodling guitar lines and staccato chords of ‘Can’t Stand Me Now’, the mass singalong compensates for Doherty’s occasionally effete vocals. Similarly ‘Time For Heroes’, a career highlight in its glorious rush of surging chords and sparkling lyricism, is bolstered by its incitement to mass bedlam and perhaps the night’s heartiest singalong.

Surprisingly there is a dearth of new material but, noticing the disparity in crowd reaction to songs old and new, it is perhaps for the better. New song ‘Fame and Fortune’, with its mischievous verse licks and the sea-shanty novelty of its chorus is a decent addition to the set. The plodding, cod-reggae verses of recent single ‘Gunga Din’ are revived by its infectious singalong chorus, sounding even better here in the live forum, and is the best received out of a scant total of four new tracks.

With the somewhat unlikely deployment of producer Jake Gosling (Ed Sheeran, One Direction) smoothing out some of the band’s rough edges on Anthems For Doomed Youth, The Libertines’ ramshackle charm remains. There is plenty of the usual scruffy guitar leads and fractured licks and the band are more dynamic with Barat as lead vocalist rather than subject to the occasional vulnerability of Doherty’s voice. ‘Music When The Lights Go Out’, perhaps the most poignant capturing of the erstwhile decline of Doherty and Barat’s all-but-physical romance, feels a little flabby and occasionally sounds too slow.

As ever with The Libertines, it’s never going to be musically polished; plus, with the band occasionally going into huddled discussion and Doherty sometimes seen strumming while sat on the drum riser, parts of the evening have the feel of a casual jam session. Considering the wealth of songwriting riches at the band’s disposal, it scarcely matters.

In a 21 song set, featuring minimal interaction with the crowd (the odd shout of “Bristol!” and Doherty parodying banal stage banter by faux-reminiscing about a previous show at the Academy supporting “Micky, Dicky, Bob and Dave”), the vast majority of favourites make an appearance. An encore featuring ‘Up The Bracket’, ‘What A Waster’ and ‘Don’t Look Back into the Sun’ sees the pandemonium reach fever pitch as the security staff start dispatching stage bound crowd-surfers to the exits.

With their redoubtable catalogue of tunes, you can see why The Libertines have meant so much to so many people. Performances like tonight, however, have that that inescapable tinge of a band revelling in the past. Whether the Libertines of 2015 are mostly a nostalgia act, or newly reformed and on the cusp of an exciting new chapter, remains to be seen. It’s been riveting nonetheless.