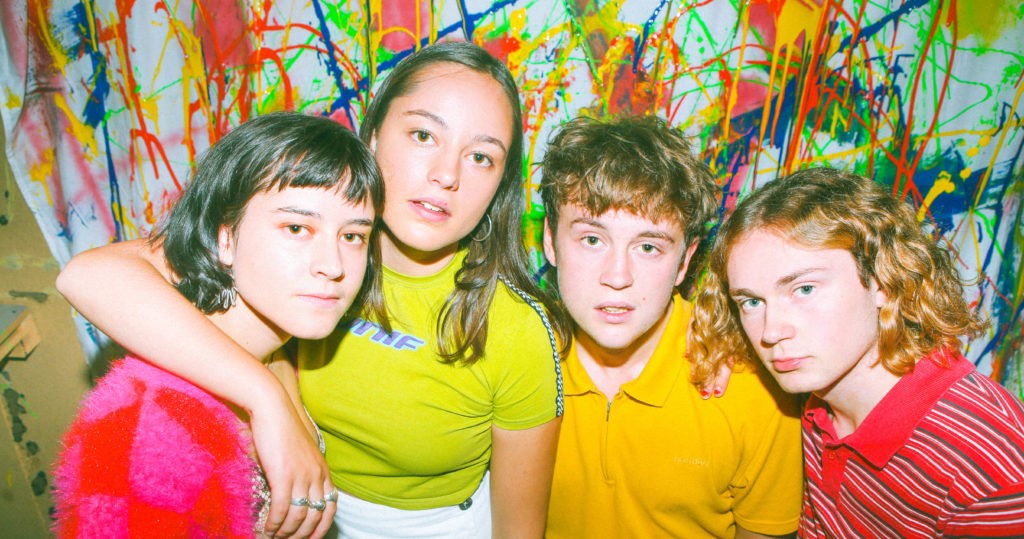 Just three days since The Orielles’ second album Disco Volador was birthed into the musical landscape, the Yorkshire quartet’s appearance at the 1,100 capacity SWX is a venue upgrade almost exactly a year on from their sell out at the 450 capacity Fleece in February 2019. Granted, it’s not a sold out show this time round but it’s a healthy enough crowd to suggest that the group’s audiences are growing in step with the expansive, spacey textures featured on their follow up record.

While 2018 debut Silver Dollar Moment was a fine collection of reverb-soaked indie pop songs with dreamy harmonies and 60s girl group choruses, their sophomore effort is a fairly stark diversion into free-ranging, jazz-inflected, spatial guitar jams. Opener ‘Come On Down Jupiter’ is evidence in point as it meanders- via guitarist Henry Carlyle-Wade’s transition from gauzy arpeggios to Nile Rodgers-esque chops – to a finish.

“Alright my lovers” says Carlyle-Wade before indicating that the band’s objective tonight is to inspire everyone “To dance and forget it’s Monday night.” First album favourite ‘Let Your Dogtooth Grow’ is familiar enough terrain to get the audience moving, although Carlyle-Wade’s repeatedly attending to his pedalboard and a subsequent puff of the cheeks indicate some early doors dissatisfaction with the sound.

Though the new songs’ modus operandi of neglecting conventional song structures and evolving through myriad segments make them less accessible than the older tracks, they arguably provide a more interesting spectacle of live performance while retaining some winning aspects of their original sound. ‘Memoirs of Miso’ is the first instance of singer Esme Hand-Halford’s vocals gliding into the silky smooth tunefulness that pervades Silver Dollar Moment while ‘Whilst the Flowers Look’ – a slower reverie of droning keyboards and punchy guitar riffs – has moments as melodic as much of the debut record.

Though a Monday evening, there appears to be enough erratic noise coming from the audience to suggest that not everyone has forgone the sauce. There’s a sudden singalong of “Happy Birthday”, though from the band’s confused expressions, it’s unclear as to whom – be it band member or a random in the audience – it is being sung. There’s also a small segment of lads pogoing throughout, a shout out to Big Jeff and a bellow of “Nice!” leads Carlyle-Wade to sardonically utter “Nice. That’s the best compliment we can have about our music.”

Compared to the Fleece gig in 2019, the lack of intimacy and the compromise in sound that this naturally entails makes for a less sonically pleasing experience, particularly in Hand-Halford’s dreamy vocal talents. However, the leaning toward the more danceable bent of the newer tracks, give this show an enjoyable character of its own. ‘Bobbi’s Second World’ is funky hip-shaker which sees Carlyle-Wade’s perpetually enjoyable (not to mention animated) guitar work at his most robust; meanwhile ‘Space Samba (Disco Volador Theme’) – a typical example of the band’s opaque song themes – evolves in lively fashion from its rocky three chord figure.

It’s noted that two songs remain and the hazy, momentum shifting ‘Sunflower Seeds’ is greeted with much enthusiasm before the epic ‘Sugar Tastes Like Salt’ provides the big finish. Considering Carlyle-Wade’s easily more garrulous interactions at The Fleece last year, that show had the friendly, almost naïve, vibe of an up and coming young band. Under a wail of feedback, The Orielles leave tonight’s stage as the more professional, business-like operation demanded of their larger surroundings.