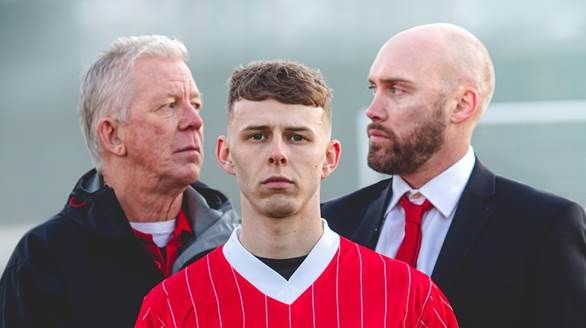 Despite its minimalist approach – a mere three actors and the unchanging setting of a player’s dressing room – Patrick Marber’s gritty football drama effectively delves into how myriad human incentives have led to a heady mix of greed and corruption that has tainted the very soul of the beautiful game. Though using the less obvious and non-glamorous realm of the semi-professional ranks to illustrate its themes, its impassioned monologues and attention to detail – you can almost smell the masculine cocktail of Deep Heat, talcum powder and post-match lagers – also serve as a somewhat tentative love letter to a sport that remains as globally adored as ever.

In the dressing room of an unspecified non-league football club, kit man and former club hero Johnny Yates (David Lloyd) dutifully irons the team’s shirts while bombastic and animated manager Jimmy Kidd (Joe Sims) stalks around the room, his speech and gesticulations dripping with cocksure ambition. It seems that an ideological impasse, and a generational chasm, between Yates and Kidd simmers beneath the surface but it’s not until we’re introduced to promising young talent Jordan that the stark conflict between the two men springs into view.

Jordan, a formerly troubled adolescent who appears to have sought salvation through Jesus, quickly shows himself to be a footballing wunderkind but is initially hesitant to defy his morals within football’s ‘win at all costs’ milieu. After Jordan refuses to accommodate Kidd’s admonishment to take a dive, the latter aggressively asserts that he was merely asking for him to “apply in-game intelligence.” It’s a display of purity on Jordan’s part that forms a picture of not yet corrupted innocence upon which the play’s later machinations – contract talks, kickbacks and the manipulation of the young player’s career – can feed. Meanwhile, it’s Jordan himself who holds a secret that threatens to undermine both Yates’ and Kidd’s backroom manoeuvring.

In a play with just three performers, there isn’t any room for any of the actors to be carried by the others, and tonight’s cast are all up to the job; Sims is adroit enough to make Kidd’s obnoxious, fiercely driven motor-mouth likeable enough to enjoy his verbose outbursts (“three hundred pig farmers shouting ‘fuck off’ to various melodies” is his description of one opposing crowd); David Lloyd as Yates, in his understated way, nicely captures the pathos of a once loved elder statesmen fallen upon hard times; Thomas McGee as Jordan – who has had to wait two years after the Coronavirus scuppered this inaugural acting performance in the final days before national lockdown in 2020 – makes a solid and commendable debut.

Another strength is the distinct local flavour on offer; we hear a blast of former Bristol Rovers player Geoff Twentymen’s radio show while Sims’ and McGee’s Bristolian origins are further bolstered by Lloyd’s credentials as a former announcer at Bristol City. The Westcountry accents, the dressing room patter and ‘football is a matter of life and death’ worldviews are highly evoking for anyone who has played in Bristol’s lower leagues.

In learning of the hardship and heartache that have shaped the personality and motivation of the three characters, the play also explores the deterministic sense that people are inexorably who they are. Beneath the gaping black hole that has formed within the soul of the once beautiful game, there apparently lay a series of flawed humans. How else to explain Kurt Zouma booting a cat? (which amusingly gets a last minute insertion into tonight’s script). Despite it’s relatively brief 80 minutes or so, there’s a lot to get stuck into here.