x
Mixing free running dancers, a silent disco approach to sound and a collection of concept songs that Pete Townsend would be proud of ‘The Roof’ combines some disparate but clever ideas to provide a compelling and engaging experience that is as unique as it is memorable. 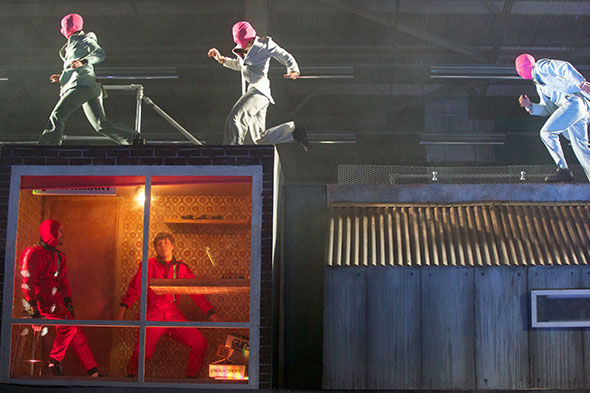 ‘The Roof’ is the third collaboration between directors David Rosenberg and Frauke Requardt (‘Electric Hotel’ and ‘Motor Home’) and sees the pair again tackling larger world concepts such as “human preoccupation for self preservation” and “consumption fester[ing] alongside feelings of detachment” and fleshing them all out over the bones of a more straightforward narrative – this time that of a computer game. 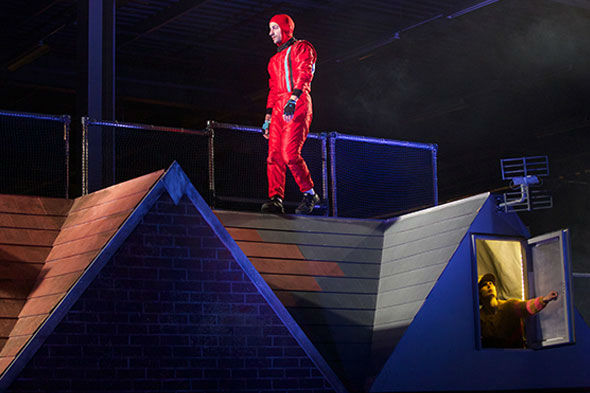 These highly vaunted overarching concepts are only matched by the equally ambitious stage design (Jon Bausor/Rebecca Brower) and soundscape (Ben Hales/David Price) that accompany the performance and are each worth the entry fee on their own merits. It is a truly holistic approach to performance with as many senses as possible being catered for. On arriving each audience member is issued with a set of headphones and ushered into the Roman coliseum like arena that is our stage. The entertainment is all around and above us, whilst the sound also gives a 360-degrees feel to with constant cat calls from all angles, as if the actors were peering over ones shoulder, educing craning and spinning of all in attendance. 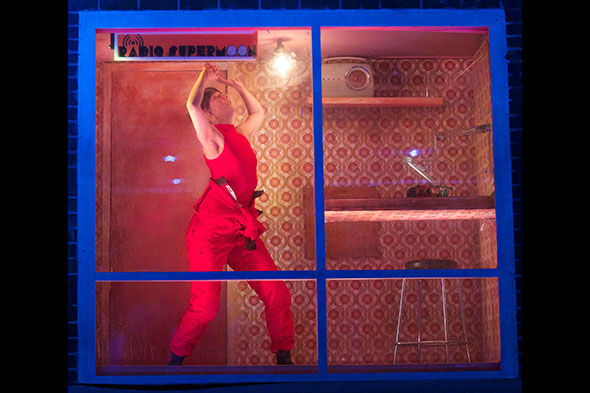 Proceedings begin with a Tarrantino-styled soliloquy from our femme-fatale (Janina Rajakangas) who in classic gaming lore is imprisoned in a window fronted room waiting, it seems, to be freed by our “unnamed hero” and goes on to provide punctuating erotic dancing and seductive narration periodically. Our main protagonist is Player 611 (Danilo Caruso) who over the next hour attempts to navigate the increasingly challenging levels of the game across the rooftop stage avoiding monstrous gangsters (Kynam Moore, Alessandra Ruggeri & Terrachai Yaun Thobumrung), siren marching band baton girls (Louise Tanoto), fag smoking cleaning lady (Megan Saunders), former player (Si Rawlinson) and brutally violent couriers. 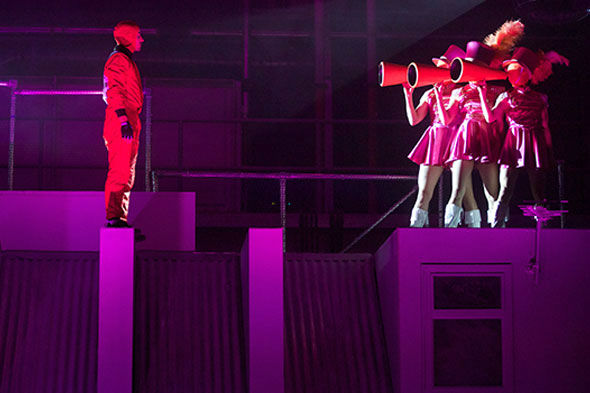 Each scene is delimited by a slow motion reflection of the previous level, which often incorporates dancers wearing bunny masks that remind one of the creepy rabbit like character from ‘Donnie Darko’. 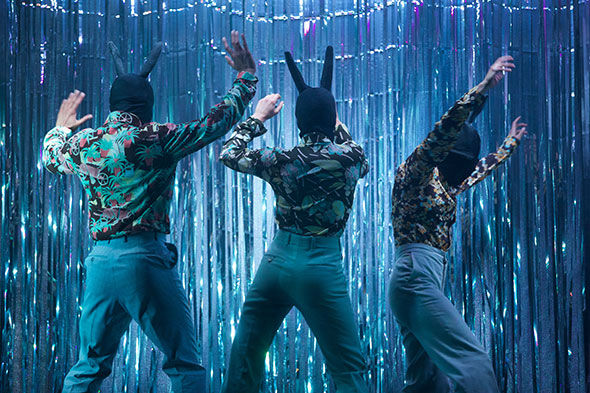 All the performances are most impressive given the precarious footing on which they are given but Kynam Moore’s athletic and stamina sapping portrayal of Gangster 1 is worthy of special praise. While it is a purposefully repetitive story it does labour over some aspects and could have been conveyed in as effective manner with 5-10 minutes trimmed from its running time. But that said this is still an achievement as innate characters are brought to life by heart-warming touches (see 611’s confused relationship with his place in this world and more poignantly with his heroine especially when it is juxtaposed against Player 1’s unrequited/undying love for the same character). Shout it from the Rooftops ‘The Roof’ is a real triumph. Check out ‘The Roof’ here. Mayfest has now ended but we hope will return next year. Keep posted by visiting them here.
Follow @Thefixmag
Recent Posts
We Like You…