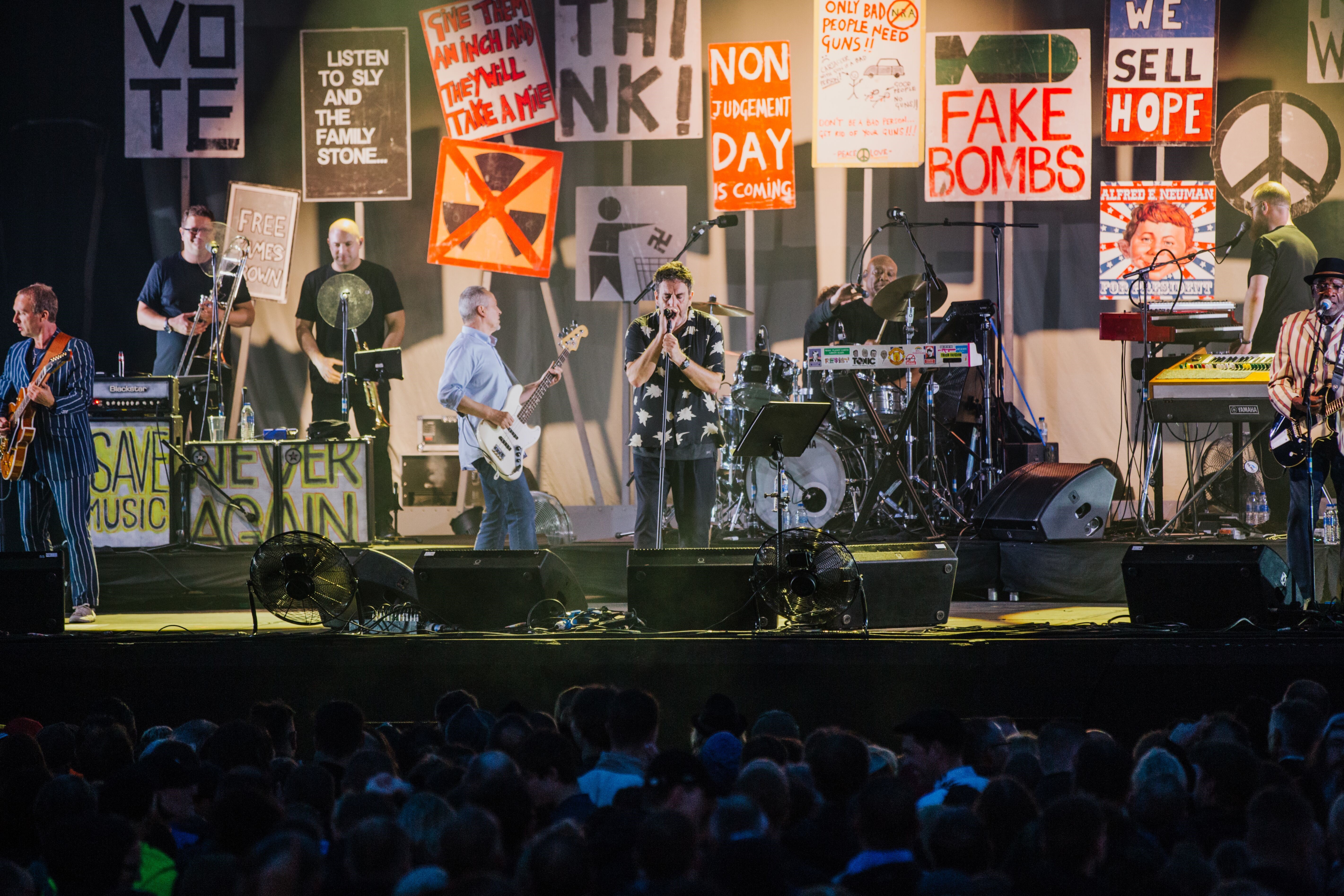 Twenty-four hours ago within this very amphitheatre, Bernard Sumner was predicting that it was going to “piss down” for tonight’s Specials performance. Last night’s New Order gig was in the context of a sun-baked Bristol harbourside but, after a day of torrential rain, Sumner’s prediction rings true amidst the ubiquitous sight of waterproof ponchos, rain jackets and hoods. Even the mass wearing of the band’s signature pork-pie hat look as much a protective measure against the elements as it does a sartorial homage.

It’s now been 40 years since The Specials’ eponymous debut album and, with 90 percent of tickets for tonight selling out within 72 hours, musical nostalgia remains a seductive mistress. A blaring air-raid siren accompanies the band to the stage before giving way to the dark ska-rhythms of ‘Man at C&A’; while comprehending how a 1980s budget clothing store relates to The Specials’ vision of nuclear dystopia, one realises that standing over to the far left of the arena isn’t conducive to best appreciating the sound.

Before moving to a more central spot within the audience, it’s easy for the early stages of tonight’s set list to be relegated to background music struggling to stay afloat within the babble of audience chat; ‘Rat Race’ is early evidence of the group’s ability to fashion a hummable chorus, guitarist Lynval Golding is seen adopting the Peter Townshend windmill while Terry Hall – who, at sixty years old, still looks young enough for a drunken stranger to deny that it’s actually him – can be heard coating off Mel Gibson as a “Jew hating midget.”

Though there’s a healthy run of variety in the middle part of the show – ‘Doesn’t Make It Alright’ from their 1979 debut, a reimagining of Fun Boy Three’s ‘The Lunatics (Have Taken Over The Asylum)’, a cover of The Valentines’ ‘Blam Blam Fever’ – it’s not until old favourite ‘A Message To You, Rudy’ that the crowd comes alive in earnest. It’s a fine replication of the recorded version and, perhaps knowing that the night’s first real shot has been fired, Hall cockily aims a rhetorical “Any questions?” at the crowd. 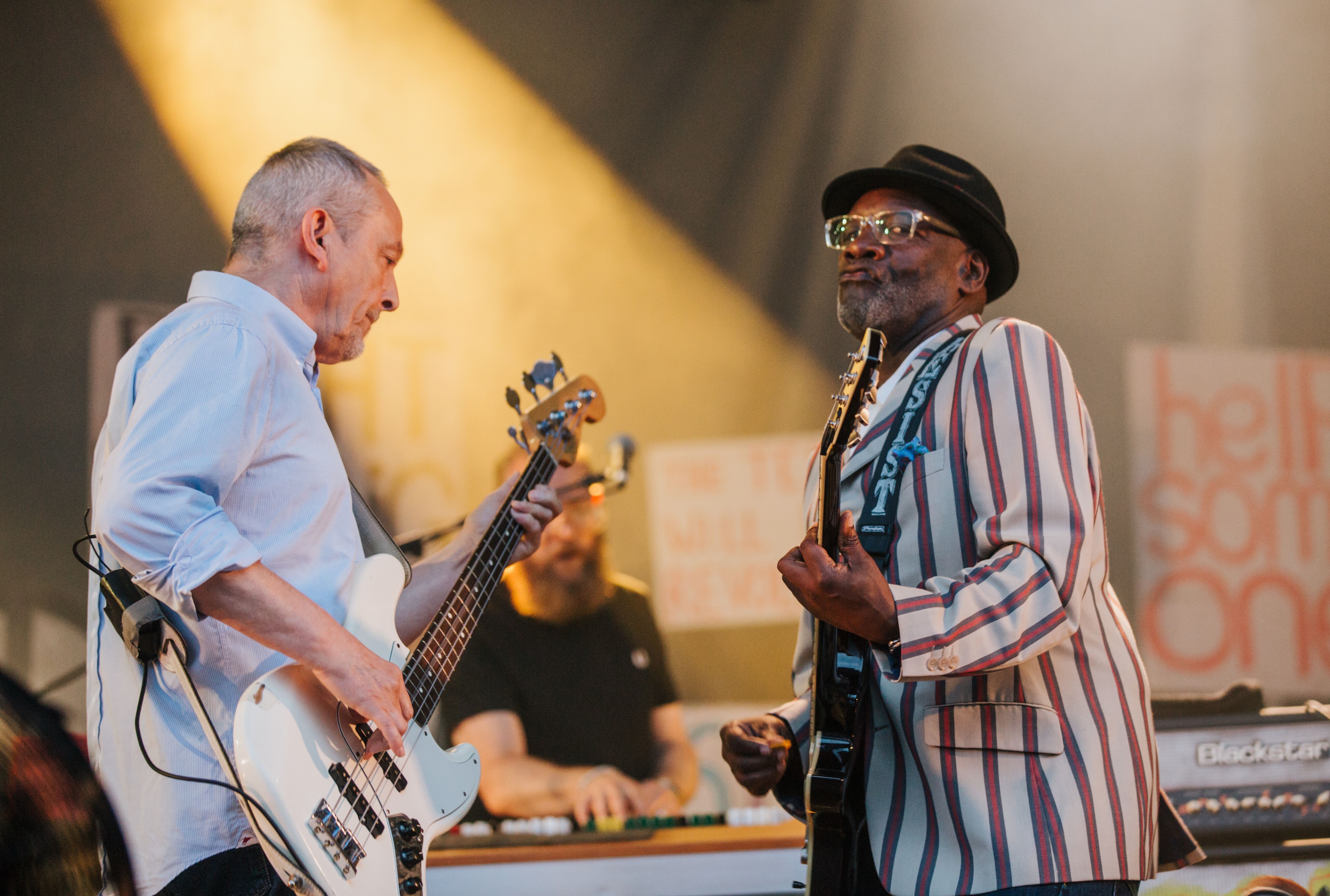 The current incarnation of The Specials – sans principal songwriter Jerry Dammers – consists of eight musicians. Bassist Horace Panter, along with Hall and Golding, completes the trio of original members while there’s the notable appearance of guitarist Steve Craddock (Ocean Colour Scene, Paul Weller). The stage backdrop consists of tongue-in-cheek protest placards (‘Free James Brown’, ‘The Television Will Not Be Revolutionized’, ‘Alfred E Neuman For President’) which serve, perhaps, to send up the band’s political and activist history.

As a racially diverse band (certainly in the context of a relatively nonprogressive 1970s Britain), The Specials’ existence was almost in itself a political statement and their leaning towards songs with conscience provided consistent moments of brilliance. We hear a one-two punch of ‘Gangsters’ – inspired by a confrontation with hotel management and police while on tour – and ‘Too Much Too Young’ which champions birth control to avoid “another burden on the welfare state.”

Meanwhile, ‘Ghost Town’, a haunting lament as to the state of the nation in 1981, remains an ingeniously evocative sonic photograph of Thatcherite Britain. A man is raised atop a companion’s shoulders, there’s a brief lager shower and the song is extended with a prolonged instrumental section. It’s the night’s penultimate song but such an emphatic statement that it may as well be the last. The Specials in 2019 are a tight unit, armed with great songs. Despite the evening taking a while to get going and the Lloyds Amphitheatre not always being conducive to being hit with a full sound, it’s been well worth the soggy pork pie hats.