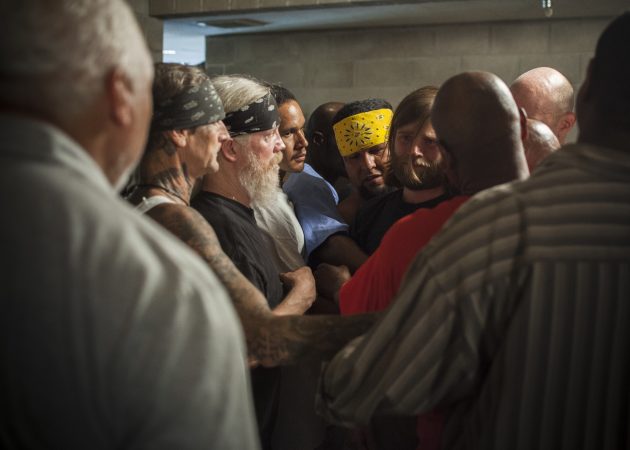 “Right down where we hurt the most is where the medicine is at.” This line of rehabilitative philosophy, heard around two-thirds of the way through Jairus McLeary and Gethin Aldous’ ultra-intensive documentary, is a fitting summation of the mentally gruelling personal trials that lie within ‘The Work.’ Delving deep into the sorrows and traumas of broken and dysfunctional men at New Folsom Prison, inmates, facilitators and regular Joes alike search for the deep-seated sources of their neurosis, unhappiness and incarceration.

McLeary and Aldous’ film captures the ground-breaking, weekly four day therapy sessions for violent felons and gang members serving long sentences within the prison’s maximum security walls. Twice a year, even civilians – be it for personal growth, novel experience or to exorcise demons of their own – are invited in from the outside. The four day programme covered here sees a bar tender, a museum associate and a teaching assistant join in with the murderers, violent criminals, members of the Crips and Bloods and a former member of the Aryan Brotherhood.

The sessions are essentially an extremely vigorous and emotionally demanding form of group therapy – what are perhaps familiar soul-searching exercises are afforded a heightened intensity given the complex and defective individuals involved. The men are divided into groups and share their stories of regret and betrayal as they burrow deep to locate the sources of their malfunction. Emotions run extremely high, barriers to long repressed feelings are broken, tears of heartache and anger intermingle as the felons, civilians and facilitators prise each other apart in search of a remedy.

In containing no voiceover commentary, talking head interviews, soundtracks or any desire to influence from the outside, ‘The Work’ is an exercise of pure observation; the directors wisely sit back and let the cameras capture simple moments of powerful human drama. In a compelling early scene, we witness Kiki – a member of a Pacific Islander and Asian gang who has long resisted mourning his dead sister – systematically stripped of his armour and collapsing into overwhelming sobs of emotion. Later we see the beginnings of a potential brawl as Brian – an ostensibly cynical and resistant civilian within the group – unnecessarily finds fault with another group member’s presenting a story of past betrayal. It’s engaging stuff; so fascinating that it’s hard to take your eyes off it, so raw that, occasionally, you almost feel as if you need to look away.

It would’ve been impossible to ably capture the true substance of this form of rehabilitative therapy had the film departed from its barebones, non-interventionist approach. For example, the cries of pain and catharsis – which emanate from some of the other groups in the room – are heard as mere background sounds and this serves as more effective a device than any touches of music or commentary would have. Ultimately, this straightforward embracing of the raw drama is given a perhaps unexpected reward during a riveting scene where a former shot caller for the Bloods talks a fellow inmate down from the brink of suicidal despair; when the two men lock in a tight embrace, leaving their microphones picking up nothing but breaths and heartbeats, it’s as powerful a moment that one could expect from documentary film.

With its clearly portraying the inmates’ general attentiveness and nurturing and concerned questioning of other group members, the film raises issues surrounding the complex nature of human beings. In particular, Rick (the former Aryan Brotherhood member) seems like a figure of sincere regret and potential redemption. Also evoked are diminishing notions of moral responsibility in its purest sense; the criminals featured here largely don’t seem like the embodiments of evil but unfortunate individuals held captive by violent natures fomented by bad upbringings, absent fathers or fatherly beatings.

Though an unrelenting emotional content captured by an uncompromising fly-on-the-wall approach can make the gruelling therapy sessions at times almost too palpable and claustrophobic for the viewer, one wouldn’t argue that the specific subject matter could be covered in a more effective way. A gritty, visceral and emotionally jarring piece of documentary cinema.

‘The Work’ is released on DVD on Monday 27th November.