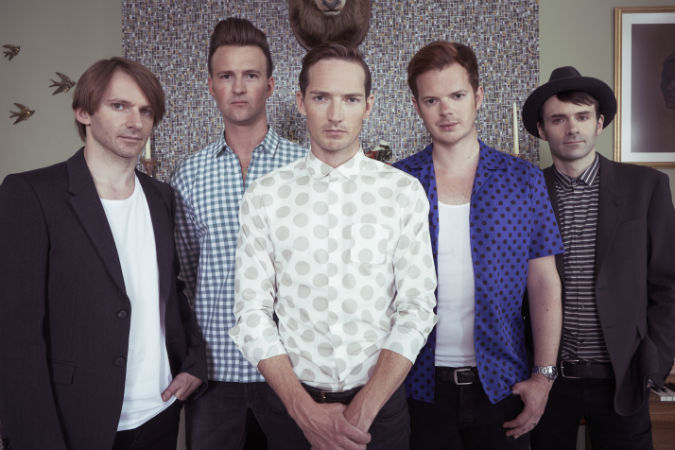 You may know more Feeling songs than you think…

Well, that’s the overriding feeling this reporter had as he reflected on a hit filled performance by the poptastic indie boys from Horsham.

Back in town to promote the release of their new album ‘Boy Cried Wolf,’ the night starts at a slow pace with Dan Gillespie-Sells walking on stage strumming new single “Blue Murder” bathed in a brilliant spotlight that highlights his golden guitar strap and pitch perfect vocals.

It’s a very mixed crowd with whole families – from granny to the kids – having made the trip down to the O2 tonight, a fact which is clearly a tribute to The Feeling’s timeless pop songwriting.

“1, 2, 3, 4” snaps Gillespie-Sells before they drive forward with first sing-along of the night “Fill My Little World”.  The band bounces around stage like the front row and then they coordinate the crowd in waving their hands from side to side in total unison.

“Show us your tunes” shouts a burly man from a few rows back. “I’ll get my tunes out for the lads shall I?” wittily retorts Gillespie-Sells to much merriment. It’s an issue in microcosm that bands like themselves must always face. Victims of their own success and with a crowd demanding of their hits they must strive to find that balance between blooding new material and still making space for the classics.

“What night is it tonight Bristol?” asks a somewhat weary Gillespie-Sells. “Wednesday” the crowd reply. “Well, hello Wednesday” he replies before sitting at large white piano in the centre of the stage. “Sorry ladies and gents its gone a bit wibbly wobbly” he continues highlighting some piano related technical issues before finally striking the notes of “You’ll See”. It’s a great crowd pleaser and sees the audience harmonise altogether like some great choir.

Next up are the heavy weight of “I Thought It Was Over” – all electro beat and strobe lighting – and the always buoyant sounding “Never Be Lonely”, a song that ends with a very soft cannon sing-a-long that also helps display Gillespie-Sells impressive vocal range. After a big breath he suggests that the crowd really should “practice clapping” and to “have a spliff” so out of time is their percussive attempts.

“I hate crowd participation but when it’s like that it’s awesome” he acknowledges at its conclusion. Their many years on the road (they have actually been going since the heady Britpop days of 1995) have obviously given them all the skills one may need to masterfully manipulate a crowd.

“When we started this record we locked ourselves away in our local pub in London” explains Gillespie-Sells, “and because we have a new record label there was 0% pressure and we engineered it ourselves and we think it’s our best record since the first one” before they test their thesis with a new one ‘You will See’ -“the first song [they] wrote for the album”.

“Stamp your feet and clap your hands” directs Gillespie-Sells before they wrap up for the encore with “Sewn” and “Rescue”.

“I had to come back out to get my beer” jokes Gillespie-Sells before they set off on the encore which comprises a long homage to “some of [their] favourite acts from last 40 years”.

Starting with The Beatles‘ “Day Tripper” they run through accurate reenactments of The Kinks’ “You Really Got Me”, “Pinball Wizard,” which is far more Elton John than The Who, Queen/David Bowie’s “Under Pressure”,  Pink Floyd‘s ‘The Wall’ and finally Blur’s “Parklife” – with Ciaran Jeremiah moving out from keyboards to fill in for Jeff Daniels.

They finish on “Love It When You Call” which again brings out another of those ‘oh that’s one of theirs’ moments that have perforated the night.

The Feeling show they still have something to offer and like the “Boy Cried Wolf” they and their new songs deserve a second chance.

Find out more about the band at www.thefeeling.com and you can read our gig preview interview with Dan Gillespie Sells here.

Read our review of Yellowire, who supported The Feeling on the night here.