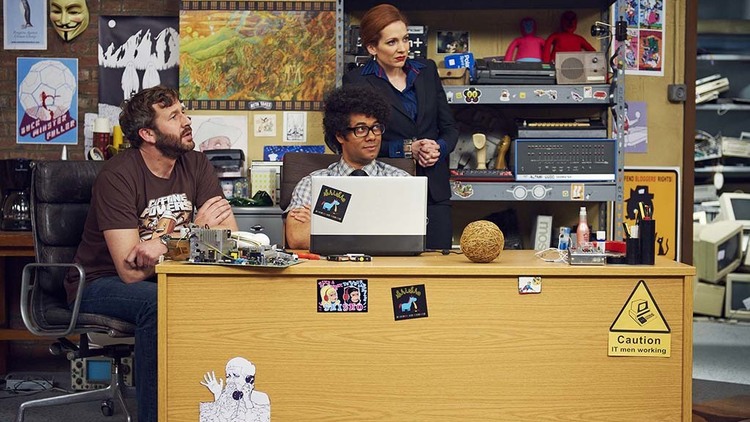 Known for creating the successful sitcoms Black Books and Father Ted, writer Graham Lineham teamed up with The Office’s producer, Ash Atalla, and did what many thought was impossible and out-dated when making The IT Crowd – they took the computer nerd stereotype and breathed new life into the studio sitcom complete with its very own laughter track.

It’s a testament to its quality and popularity that I feel I don’t have to explain the premise and I expect that if you’ve clicked this article link then you’ve at least heard of The IT Crowd even if you’ve not watched it. For those who haven’t, here it is (pulled from Wikipedia):

Set in the London offices of the fictional Reynholm Industries, the show revolves around the three staff members of its IT department: a geeky genius named Maurice Moss (Richard Ayoade), the work-shy Roy Trenneman (Chris O’Dowd), and Jen Barber (Katherine Parkinson), the department head/relationship manager, who knows nothing about IT. The show also focuses on the bosses of Reynholm Industries: Denholm Reynholm (Chris Morris) and later, his son Douglas (Matt Berry.)

I find it as mind boggling that this series first aired on Channel 4 in 2006 and thinking back to this time I seemed to remember seeing the trailer and scoffing at the very thought of watching it. Perhaps some snobbery came on my part, at the time I was still bowing down to The Office and in the midst of battling my way through Curb Your Enthusiasm, and as alluded to in my introduction there was a general consensus that television audiences were ‘getting smarter’ and this had resulted in barely any traditional studio sitcoms being made. I thought The IT Crowd was beneath me is what I’m getting at, but years later and with a wider appreciation of comedic styles there’s a place in my heart for this damn right silly, easy watching and laugh out loud show as well as those aforementioned dry, witty, slice of realism, thinking man’s comedy series. 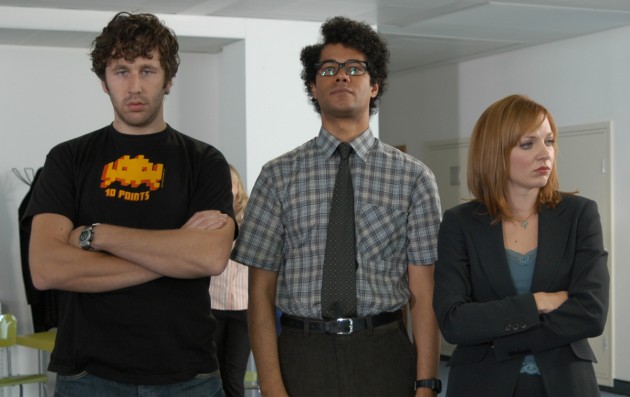 I must stress – even though I say it’s damn right silly, it’s delightfully written and gets mileage out of one of the more commonly understood stereotypes within popular culture. It creates an ‘us and them’ mentality with the ‘computer geek’ versus the world that a broad audience can relate to. We also appreciate the irony in that those ‘types,’ that were always depicted as being the ‘lesser’ in the media we’ve consumed right up to the digital age, are actually those we depend upon most, yet somehow they’re still widely mocked, which is farcical. These aspects are cleverly manipulated and played on in The IT Crowd.

Of course, as I’ve referenced before in The Weekend Binge articles, it’s the characters that will keep us coming back more than anything else and within these whacky set ups, far-fetched plots and bizarre circumstantial events, Lineham has created wonderfully flawed and socially awkward characters that are all brilliantly performed. In early series Chris Morris (Brass Eye) and Noel Fielding (The Mighty Boosh) are as hilarious as always and showcase even more depth in their comedic performing talents, but it’s the core cast whose efforts rightfully earned them household face status. Jen, Roy and Moss is a wonderful mix of characters at the heart and the comic timing from all three is impeccable. 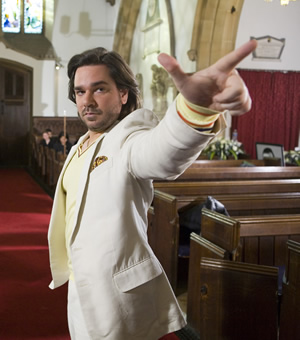 Matt Berry, who plays Douglas, the boss of Reynholm Industries in later series, is hysterical and to be honest has the kind of voice that could make any line of dialogue funny. It was fantastic to see him on screen with Ayoade again after their performance together in earlier Channel 4 singular series Garth Marenghi’s Darkplace and in The IT Crowd this shameless, narcissistic sex pest often steals the show. My favourite episode is when Douglas meets the woman of his dreams but when his attention is taken up by his self obsession, pure horniness and steak he fails to fully process the fact that she tells him how she used to be a man (spoiler: he thought she said she was from Iran).

For me, shows like the IT Crowd essentially sum up one of the fundamental reasons for television in the first place – it’s there to help you escape! It’s easy to watch, you don’t have to be fully absorbed and it’s entertaining.

The IT Crowd is now streaming on Channel 4 OD and Netflix. To read previous articles from The Weekend Binge please click the following links:

Babylon, Black Mirror, Arrested Development, Online Shorts, Documentaries, The Office (US), The Bridge and The Shield