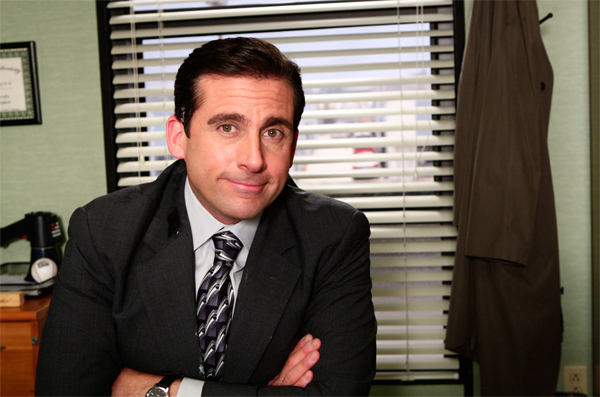 Steve Carell is amongst the most talked about in Hollywood at the moment after his portrayal of eccentric millionaire John Du Pont in the uncomfortable true story of Foxcatcher led to his Oscar nomination for best lead actor. For Carell, this career-defining role could change the course of a career he has built of the back of his comedic performances, but I certainly hope he won’t turn his back on comedy. One of his most notable career roles was as Michael Scott, the American David Brent, in the US remake of The Office, a show that is brilliant in its own right and the subject of my latest in The Weekend Binge series.

The British version of The Office, created of course by Stephen Merchant and Ricky Gervais, still remains one of my favourite comedies to this day and had already achieved cult success in North America winning over celebrity fans such as Ben Stiller and Larry David, but it was never going to appeal to the masses. Its attention to realism, dry and witty dialogue and sheer Britishness wouldn’t appeal to the broader American audience and for those who love it we don’t really care. However, its remake does appeal and for those who are sceptical, believe me, it really is worth taking a look at.

Okay, so I don’t mean forget about it all together but sit down to the American version of The Office with an open mind and don’t compare it to the original. Don’t feel you’re committing some kind of television viewing adultery and just appreciate that they are two different shows. You are allowed to like both.

“Why are you putting a summary here, Dutton?” is probably what you’re thinking. Well, as this article progresses you’ll get a sense of how the series of 201 episodes naturally led to the development of a different tone and comedic style due to the complexities involved in creating that much content. More time with characters, an importance on bringing in new characters, having to think outside the original concept to generate new storylines, having many different writers throughout – it all leads to a broader show than the original. Fundamentally, I think the difference is that it quickly escapes the mockumentary and realism and becomes a workplace sitcom following whacky characters in situations that will drive comedy rather than a fly on the wall piece that provides a social commentary whilst finding humour in the norm.

As Carell is now being lauded for his acting prowess in the drama of Foxcatcher, it seems fitting to pay tribute in my own little way as he is the man largely responsible for the huge success of this remake. Michael Scott isn’t David Brent but he doesn’t have to be. The most important thing is that they co-exist – the first episode aside, The Office does not have the same storylines and in the trials and tribulations of Michael Scott and how unaware he is of his social awkwardness there’s humour – even if you don’t find him as funny as David Brent. Like Brent he’s out of his depth, he’s naïve, he lacks sensitivity at times and it’s cringeworthy, but there is a difference in the style of the performance and perception of the two characters. Brent thinks he’s the world’s best boss and carries a bit of arrogance with that whereas he’s also a bit slimy and tedious with it all. Scott is clearly a nice guy filled with enthusiasm and passion who just so happens to keep putting his foot in it. It becomes clear that he was actually a good paper salesman too, so though he is out of his depth as a manager, his backstory is more believable.

The evolvement of Dwight Schrute is where the masterstroke really comes, though. His opposite, Gareth Keenan, is a harmless idiot who you can’t help but like but Dwight is weird to a whole other extreme and sinister too. Rainn Wilson’s performance throughout is comic gold. 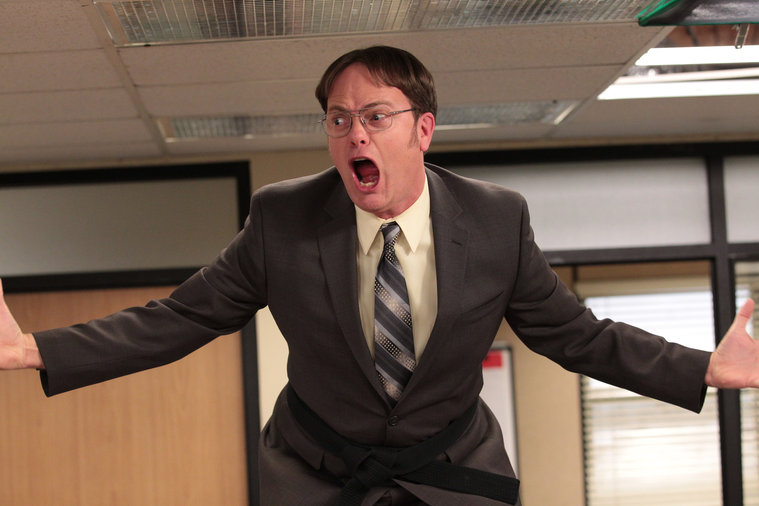 Tim and Dawn are replaced with Pam and Jim and whilst their relationship develops to the same point as their British counterparts and then surpasses it as the Americans produced a longer series (9 seasons) again there is enough differentiation. First episode aside their teasing of the aforementioned Dwight is clever in new and amusing ways, largely because of the difference in what makes him and Gareth tick. As with the Tim/Gareth dynamic, the Jim/Dwight relationship drives a lot of laugh out loud humour. Pam and Jim’s personal relationship is as sweet and complex as Tim and Dawn’s with similar obstacles at the beginning but it feels like a different romance to the one you would have seen on British screens.

Of course, the supporting cast also keeps it fresh with a longer running series allowing viewers to get to know a wider range of characters that bring different styles of humour and a whole variation of relationships; for instance, Michael Scott has a bizarre hatred for Toby in HR, which brings a whole new side to his character than when he is with anyone else. Because that relationship has time to grow and develop history it instantly generates story lines and jokes that wouldn’t have been possible without that further progression.

Should my maths be correct then there were 201 episodes of the US version of The Office and in that time it’s not just the introduction and evolution of characters new and old that keeps us watching any long running series. Like a lot of big American sitcoms, The Office has a writing team behind it headed up by Greg Daniels who originally developed the series for the US. We, the audience members, could look at each other and say, “our sense of humour is different” or “we have a similar sense of humour but we don’t agree on everything” and the truth is that we all look at the world a different way. If you think of all the offices around the world and humour that can be generated from what goes on in them it only seems natural that more writers will bring more insight and thus generate new and funny storylines. In The Office many a writing career was launched including that of Mindy Kaling, who went on to write and star in her own series, The Mindy Project. Now, you wouldn’t put that show’s style in line with the British version, but in the American version it brings a different perspective that is lived out through these characters we know and love (even if we couldn’t bare to be in a room with them…) 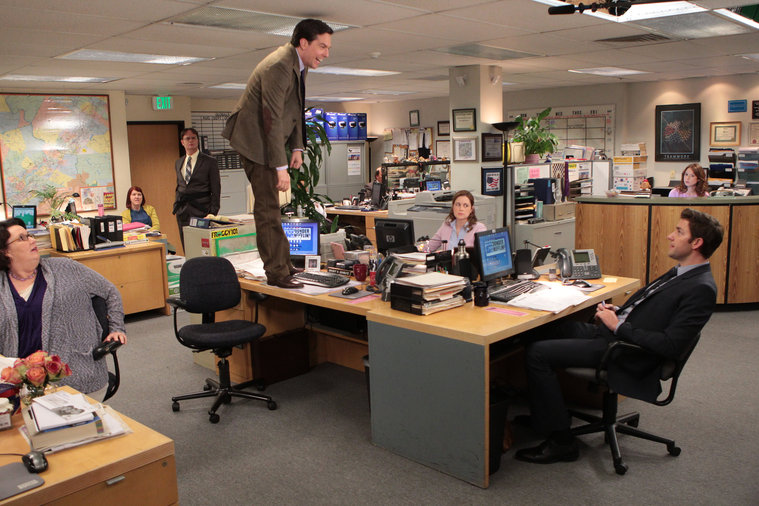 It’s all about the length…

Well, it’s not all about the length but it plays a huge part. As mentioned there’s 201 episodes and as the series develops the single camera fly on the wall documentary style becomes very inconsistent in the US version of The Office because it has its limitations when it comes to storytelling. For me that lack of attention to detail allows the show to grow in its own right. Instead of being a mockumentary following interesting characters in the work place it almost becomes a character driven sitcom that is willing to run parallel storylines and drop characters into new settings away from The Office, mixing up who is in a scene with who, which, fuck it, I’m gonna say it again, keeps it fresh.

The British version is still my favourite of the two but what the Americans and notably Greg Daniels and NBC have done with the show should be applauded and in its own right. If the British version didn’t exist, it would be celebrated as one of the most consistently funny sitcoms to come from over the pond. Series of The Office: An American Workplace can now be streamed on Netflix.

Arran Dutton is a scriptwriter and producer with writing credits for BBC. Find out more about him and his work at arrandutton.com