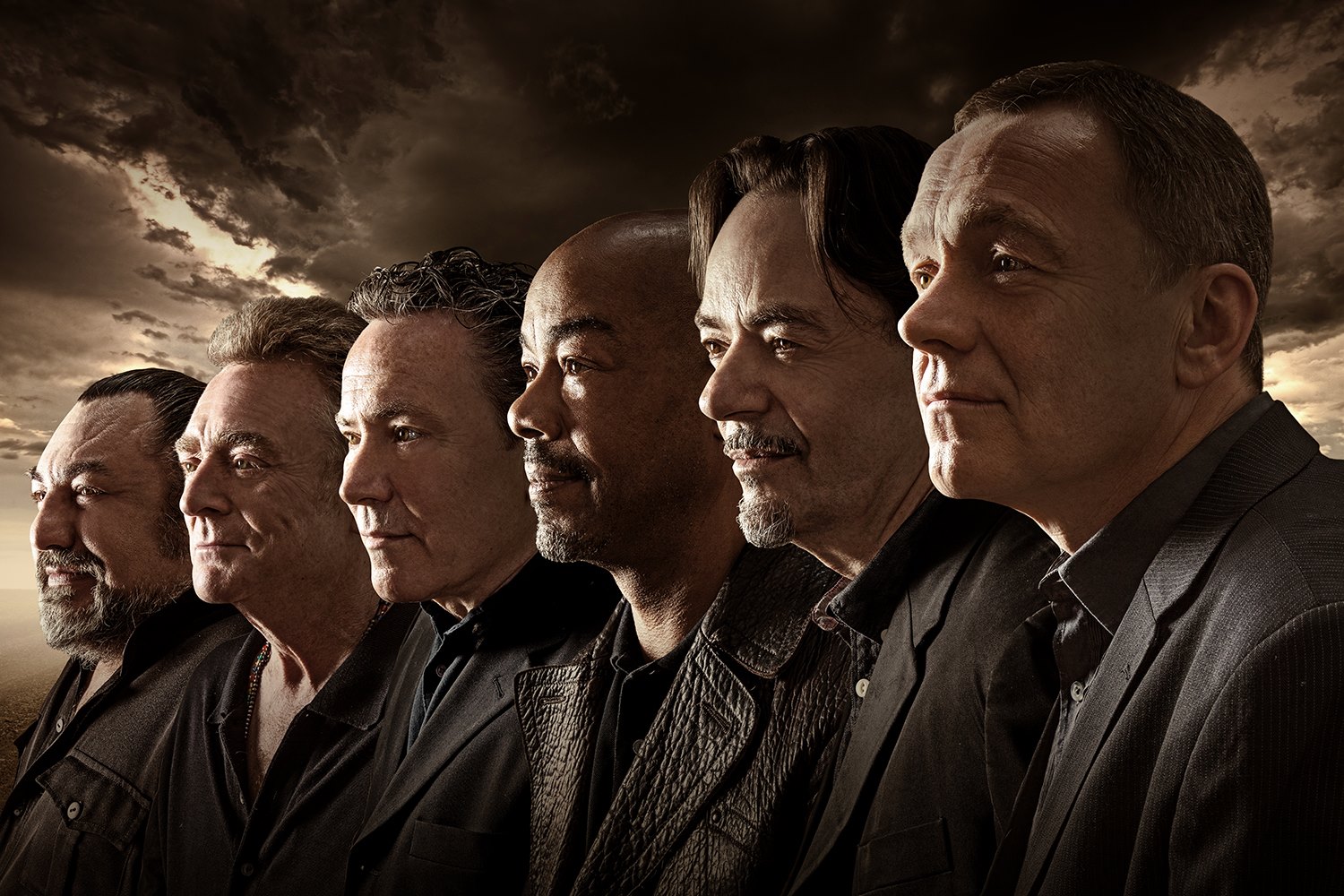 A one day festival on the rise, actually situated closer to Glastonbury Tor than Michael Eavis’s summer shindig, the excellent Godney Gathering is returning for a 5th year this Saturday with its biggest ever headliner – the legendary UB40! Its a sell-out this year and we’ll be there sipping red red wine whilst watching the band responsible for hits like “Can’t Help Falling In Love” and “I Got You Babe.” They also sang “Red Red Wine” – I feel I should point that out for those who didn’t get the clever wordplay. Please note that other beverages will be available.

Although the focus of The Fix is largely on Bristol’s busy arts and entertainment scene these days, the truth is that it actually started in Glastonbury and as The Gathering has become a fixture in the local calendar in those parts, our Somerset correspondent and founder, Arran Dutton, will be previewing the event on The Fix this week. It starts now with an interview with UB40’s Brian Travers…

There’s a huge buzz around the local area after the announcement of UB40 playing at The Gathering. What can we punters expect?

Truth is there’s a HUGE buzz around the band members too as we prepare to go back out on the road. As The Gathering will be a festival audience rather than a dedicated UB40 crowd we will play lots of hits; we have had over 40 top 30 hits during our 35-year career so there’s no shortage of ‘familiar singalong’ tunes. But, there will be surprises of course and there will be a party; we pride ourselves on having a genuinely great time on stage. I think an audience can always tell if you mean it or not, they can always tell if you are playing from the soul or just going through the motions and reggae is party music anyway, so you can’t help but fall into the groove.

In 2008, the band’s line-up changed after 30 years with Ali Campbell and later Mickey Virtue both leaving. How did this affect the band and what positive impact has it had as you’ve continued?

Even though that was over seven years ago now, time flies when you are having a good time, of course It was very emotional at the time. It was like a divorce in many ways; It’s never simple and we had all been together for so long, but our ex singer wanted a solo career and a different life. Virtue never wrote lyrics or music so that transition was easy. We found out bringing new guys into the fold, Duncan Campbell on vocals and Tony Mullings, made us work differently as both are hard working professionals so it made the rest of us come up to speed. It didn’t take very long before we felt like it had always been this way; hard work and lots of good times, we look forward to playing live, once again celebrating this wonderful opportunity we have been given to perform our music. It’s a very productive band we have with this line up. I can honestly say that the band is much happier and there are no egos taking time away from simply being musicians and playing the songs.

Were there ever any doubts over continuing?

No, not for one second. The five remaining ‘founding’ members of the band include all the songwriters  so all that changed was the vocalist, and having Duncan in the wings felt incredibly refreshing. Duncan has sung all his life like all the Campbells and he enjoys life on the road, he likes to laugh and party. I’ve always believed that good vocal chords run in families just like big ears and bald heads.

Is it true that Duncan Campbell initially turned down the chance to front UB40 when you formed in 1978? Do you think he regretted it?

Yes, it’s all true, but that was when we had just started learning to play, we did it together in a cellar beneath the bedsit rooms that Earl (Bassist) and myself lived in. We really couldn’t play much at all BUT we stuck to it 8 hours a day for almost a year before playing our first gig and Duncan did have the opportunity to go work at a casino in Barbados. I think he may have regretted it a little when UB40 became a huge live attraction & recording act, who wouldn’t? BUT he’s back now and he’s making up for lost time for almost eight years already.

You’ve had an illustrious career with many high points, but what’s been the highlight?

There have been many but I have to say playing the celebratory tour of South Africa when Nelson Mandela was released has to be up top. For all of the previous years we maintained and supported the cultural boycott of S.A. working with the A.N.C. to break down the apartheid regime, despite getting many offers of a million dollars a gig in Sun City. Sadly lots of artists did go but that’s for them and their conscience to deal with. UB40 played the biggest tour that South Africa has ever witnessed, the ticket record still stands to this day, even Michael Jackson didn’t sell as many tickets. We played all the giant rugby stadiums, Cape town, Durban, Pretoria, Johannesburg and it was a real party from start to finish, it felt incredibly good to be part of something so fundamentally important to all the people on this planet.

As a political band yourselves does it sadden you to see the dearth of politically active bands?

Absolutely, we cant work it out – It’s a mystery. Where have all the new Bob Marleys, Bob Dylans, Ub40s, Sex Pistols and John Lennons gone? There is so much to get angry about right now. It’s a right of passage, it’s supposed to be traditional – when you are young and a musician you’re supposed to start a revolution…

Chrissie Hynde invited you on tour with The Pretenders in 1980 – what are your memories of the tour and what effect did it have on the band moving forward?

UB40 love Chrisy Hynde, she is one of favourite people and its without question she helped us up that last rung on the ladder, whilst touring with her in 1980 we had our first hit ‘Food for thought’ and never looked back. Everyone needs a break when they start out and Chrissy gave us ours.

Who on the British music scene has impressed you of late? Anyone you’d like to work with?

I’m one of those strange people that LOVES ALL MUSIC, so long as it’s played sincerely and with soul I like it. There are so many ‘new’ artists out there right now it’s getting difficult to find the diamonds in the rough and if I name one then I’m sure to miss someone out BUT if Amy Winehouse, who we lost way before she showed us all how incredible a musician she could be, was still here we would be bugging her to come sing something. I would love to work with Gappy Ranks, a UK reggae singer, Pharrell Williams, Jack White – the list is endless.

We’ve heard that there’s a new album on the way. How’s that progressing?

We start recording a new album in September. We haven’t even got a working title yet, so right now we are writing, playing with lyric ideas, talking about ideas, that’s how most of the work starts with lots of conversation about the work. I believe its time for a hard hitting political album, time to stand up and be counted, feels like a real good place to start from right now. So, you’ll have to wait and see what the result brings…

What’s in store for the band beyond The Gathering?

More gigs, new album, lots of travelling. After The Gathering we play festivals in France, Holland, Switzerland, Germany, Czech Republic, Italy and then we move onto Autralia, New Zealand and the far east right through until December. It’s non stop but thats the way we like it. Did I mention we LOVE PLAYING LIVE? No kidding! We think of ourselves as the luckiest gang of mates in the universe. We are all looking forward to The Godney Gathering and can’t wait to come and play you beautiful people some music.

Finally, before we leave you to get on with life – The Gathering is seen as a mini-festival on the rise and each British summer sees more and more like this popping up. What impact do you think this has on the music scene and which festivals have you enjoyed both as punters and performers?

You are quite right. I’m reliably told there are over 400 festivals each year in the UK alone, admittedly not all are giant sized Glastonbury type festivals but it’s the smaller, boutique music festivals that have the most soul, less corporate and more about simply celebrating the spending of time in a field with like minded strangers, being nice to each other and listening to music. Plus the fact, if there 200,000 people in a field you may as well watch the gig on TV afterwards. UB40 like to be able to communicate with its audience, see their faces and interact with the feeling thats created equally between the people and the musicians on stage. It’s magical and its that that keeps UB40 hungry for more. I’m pretty sure we can’t do anything else so long may it continue. As for favourite festivals, well there’s The Moseley in our  Jazz and funk festival. Every genre of music is performed there. That takes place just by my house so that’s always a big treat to attend; I get to hang out with all 5,000 of my closest friends in one place and get very drunk on cider! It’s the smaller more intimate gatherings that feel the best, less about billing and profits and all about the event itself.

To find out more on UB40 head to their official website and you can discover The Godney Gathering on the festival website here.