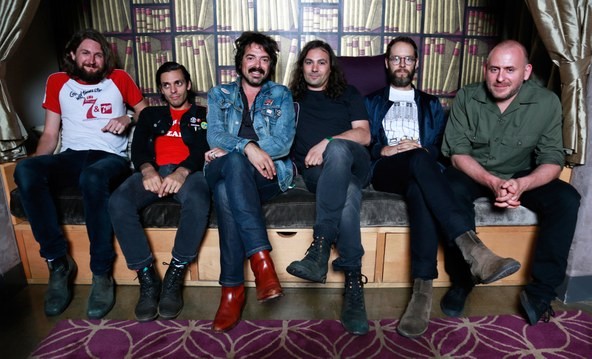 Having begun with Noel Gallagher’s High Flying Birds’ pre-Glastonbury show last Wednesday night, this year’s Bristol Sounds – the largest to date with a programme of six quality headliners performing over consecutive evenings – ended in style with a two-hour set by Philadelphia rock group The War on Drugs. And it’s specifically style of the guitar shredding variety as singer/lead guitarist Adam Granduciel – with bandmates on drums, bass, keys, saxophone and rhythm guitar laying out an impressive watertight canvas – proceeds to dazzle Lloyds Amphitheatre with a guitar playing masterclass.

First up, ‘Old Skin’ contains the off-kilter opening lyric “I was born in a pyramid” before its gentle piano riffs and jagged guitar strums flesh out into a rustic Americana chorus and the first example of the hypnotic fizz served up during Granduciel’s guitar breaks. Before ‘Pain’, the frontman declares Bristol “the best city in the UK.” It has a perfunctory ring, ala Spinal Tap’s Derek Smalls reading “Springfield” from the back of his bass guitar in that episode of The Simpsons. I bet he says that to all the cities.

The fine, sprawling ‘An Ocean Between The Waves’ sets in gentle motion with surfing guitar arpeggios atop a foundational bed of keyboard chords before breaking out, typically, into a midpoint guitar solo and, subsequently, an axe-wielding sprint finish to the song’s conclusion. The solo at the track’s halfway mark is the first of many moments where Granduciel firing into his instrumental break induces a riveting mass commotion amongst the crowd.

Considering the ultra-capable musicianship on display by all six band members, it perhaps seems a shame to bang on about the guitar playing. However, in light of the highly visible roadie who’s getting in his 10,000 steps by handing Granduciel a relentless series of guitars – Les Paul, Gibson SG, Fender Strat and a Gretch among them – it’s clearly the subtleties in myriad guitar tones that drive The War of Drugs’ material. The moments during the excellent ‘Red Eyes’ – featuring chiming keys and a catchy four chord motif – where Granduciel gasps “Woo!” and “Hey!” before launching into yet another solo offer the evening’s most thrilling spectacle.

For the most part, the band let the music do the talking. However, Granduciel makes The War on Drugs the second consecutive act – after First Aid Kit on Sunday – to spread love and a speedy recovery to local gig obsessive Jeffrey Johns before dedicating ‘Strangest Thing’ to him. He also gives two separate shout outs to support act Soccer Mommy, and asks if anyone in the audience had attended Glastonbury Festival. The latter is met with little or no response; to have gotten leathered in a field for five days and still be in attendance at a Monday night gig by the harbourside is obviously an act of heroism, or madness, that doesn’t particularly appeal.

Considering Granduciel’s distinctive vocal – that of a fuller-bodied Bob Dylan – and the band’s generally similar songwriting template, it’s perhaps easy for those of the untrained ear to view the material as a little ‘samey.’ However, the gentle acoustic strum and piano duet of ‘Living Proof’ is a distinct change of pace and it may very well be the case that – vis a vis tonight’s reaction to popular tunes such as the gliding bliss of ‘Under The Pressure’ – it would just take firmer acquaintance with other songs for this sense of sameness to be avoided. Elsewhere, the choice of covering Dylan’s ‘Born in Time’ further shines a light on the similarities in vocal style.

And we’re done for 2022; we’d be hard pressed for a tighter musical ship to pull into the harbourside for the final night of Bristol Sounds.