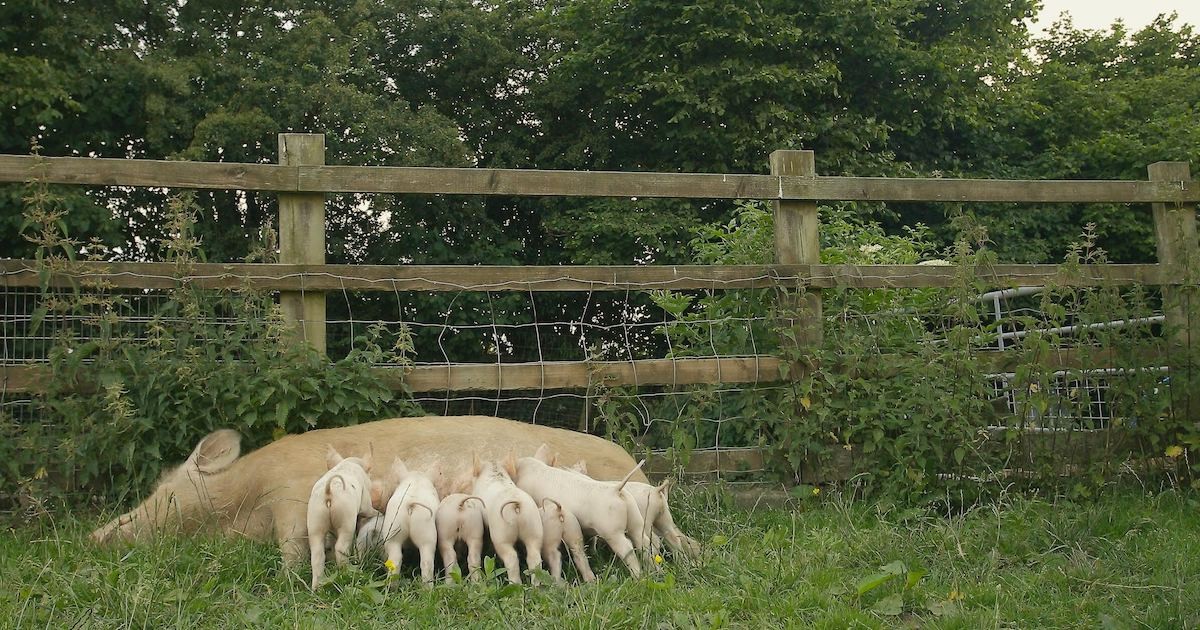 After surpassing a Go Fund Me target of £1,500 in the spring of 2022, independent filmmaker Jusep Moreno was able to organise and promote screenings for his charming 53 minute documentary film. Centred around the story of Matilda – a pregnant pig who escaped from a Nottinghamshire farm and was discovered shortly afterward with a ten strong brood in a nearby woodland – Moreno’s film is a celebration of nature but also, without being overly preachy in its message, an activist admonishment of the meat industry.

Having gained some international coverage during the summer of 2021, Matilda’s story was one of those cute and enjoyable ‘good news’ items that will rarely fail to land with an amused public. However, over a pitch dark screen during the film’s first moments, animal sanctuary volunteer Ieuan James flags up the hypocrisy: “Most of the people reading the story, learning about the story, don’t see themselves as the perpetrators. It doesn’t make any sense for me for people to be supportive of Matilda’s escape, without appreciating why she was there in the first place.”

We learn, albeit briefly, of the back-and-forth struggle following Matilda being discovered with her piglets; two local animal sanctuaries fought for their right to be spared the slaughterhouse while the farmers resisted and sneakily took Matilda and her litter back. There was subsequent pressure from a public petition of 7,000 signatures, threats of protest, and an online campaign to cajole key benefactor Marks & Spencer to free the pigs. Brinley Animal Rescue and new local sanctuary Surge would ultimately play a vital and noble role in the pigs’ eventual fate.

This all wrapped up in the first nine minutes, the remainder of Moreno’s film largely features beautiful and heart-warming footage of the pigs; the sleeping piglets all lay in close formation to their mother, there are myriad shots of the porcine siblings suckling frenziedly at their mother’s teets, the little ones dart around the barn in a berserk, circling game of chase. Most amusingly, there are lovely moments when the piglets react with pure synchronicity to the nearby sounds of their mum and, during another playful romping around a paddock, they all grind to a halt in perfect unison in response to an off-camera stimulus.

Interspersed within such idyllic footage are various moments, such as death of ‘Rudy’ following complications of a necessary castration, that serve as a reality-check and realisation of nature’s indifference to the creatures it harbours. There’s also an interesting moment where we learn the reason why pigs are often forced to succumb to a painful piercing through the snout.

Those familiar with Matilda’s story will be aware that this did indeed end up the ‘good news’ story touted, albeit superficially and at a distance, by the press (“Plucky pig who escaped farm and gave birth to nine piglets won’t be bacon” is a typically barnstorming headline from the Daily Star). However, the film’s coda hammers home, with no uncertainty, that this is the rarest of happy endings. The stats speak for themselves and it’s a microcosmic though significant gesture that Moreno and the sanctuary volunteers have raised their voice for Matilda and her piglets.

‘When Pigs Escape’ is screening in Bristol this weekend (Saturday 19th November) at Showcase Cinema Delux and Showcase Avonmeads. 10% of ticket sales will be donated to the two sanctuaries who rescued the pigs.