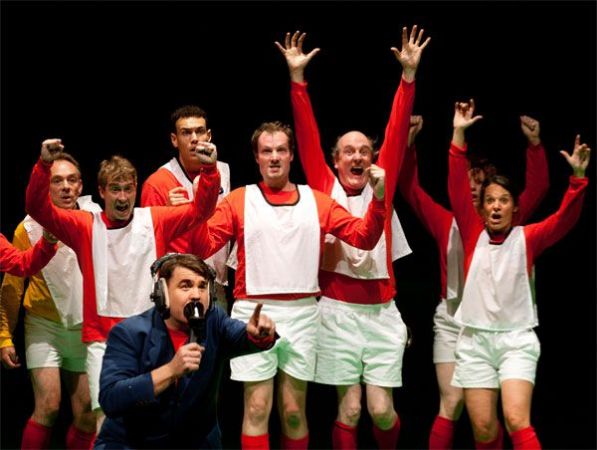 Forget Paul the Octopus – for this World Cup Bristol Old Vic has secured a dead-cert prediction. England will win the World Cup in glorious style, eight times a week! That’s right, the Old Vic has made the brave decision to combat football World Cup frenzy with more football.

Essentially, the play focuses on England’s victorious 1966 World Cup campaign which ended so memorably (even for those of us that weren’t alive at the time!) with those immortal lines: “they think it’s all over…it is now!”

However, those theatre-goers who are dying for respite from the relentless coverage of soccerball need not fret. In anyone else’s hands, this production could have been a bland self-congratulation, references to ‘beautiful goals’ piled on those to ‘amazing tackles’. In anyone else’s hands, this could have been the playhouse equivalent of an Alan Shearer monologue: tedious, predictable, bald.

Such is the consistently outstanding nature of the Old Vic’s output, it could almost be a cliche to say that this show is inevitably vibrant, engaging and imaginative. What the Old Vic has created here is a show that fizzes with ideas and is very much tongue-in-cheek. England’s goalless draw with Uruguay is recreated as a dance performance, military Two-Step coming up against seductive Cha Cha. England’s inspiration throughout the tournament comes from characters as diverse as Sean Connery, Cliff Richard and Prince Philip, played with uncertainty by the real Dr Phil Hammond, plucked from the crowd.

There is plenty of audience participation, which suits the  family crowd. Audience members are swiped from their seats to take part in formation history lessons, and others are required to unfurl flags around the balconies as World Cup teams are announced. This performance is not aimed at football fans per se – in introducing swathes of slapstick and abstract ideas, as well as live music, the play could actually be about almost anything, from chess to Masterchef.

In short, the Old Vic has created a superb show, the ideal antidote to the shear earnestness of the real World Cup. It is not a highly polished piece, but instead relies on organised chaos, enthusiasm and vigour. Highly recommended.