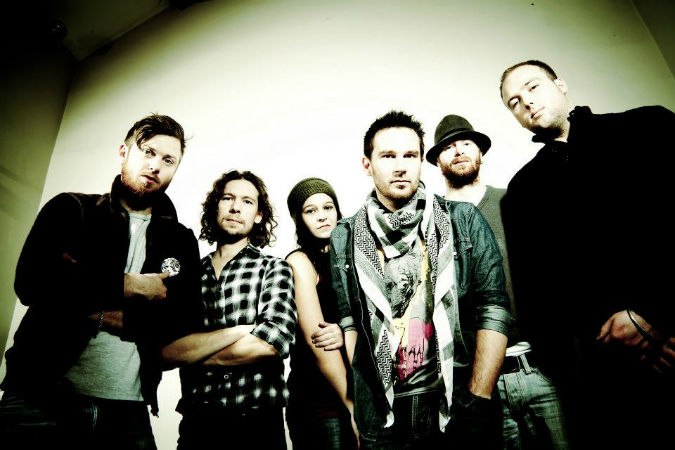 Review by Brigitte Nicolas – To read Brigitte’s interview with Yes Sir Boss bass guitarist Josh Stopford click here – Bands these days, they just aren’t content with a couple of instruments or one genre of music. On Saturday night Yes Sir Boss showed off their “Mish Mash” of music in a fantastically fun night at Bristol’s unique venue on a boat, Thekla.

The support band, Intermission Project is a good choice to warm the crowd up for the night. They stomp and clap in a way that fits brilliantly with the nautical surroundings and it surprises me to hear they are from Ashford in Kent rather than the West Country. As Matt from Yes Sir Boss later points out they are a talanted group. The set incorporates a saxophone, a banjo, guitar, and some strong singing voices. The band sound older than they look. They cover their many guitar tunings and instrument changes with funny song introductions that prompt cheers and “awws” from the crowd. People are in a good mood but you could put this down to sunshine outside and the drinks at the bar. Intermission Project is almost called back for an encore but the venues strict timings don’t allow it. Yes Sir Boss kick straight into the music, no messing about. The brass section ups-the-ante from the support band’s saxophone, and they have drums to boot. The sound is louder and fuller and suddenly so is the floor. Lyrics are hard to decipher in places. Matt Sellor’s voice and look leads me to draw an immediate comparison to Kings of Leon. Although with the other five members all adding different ingredients the comparison doesn’t quite stretch to the whole band. The crowd bop, dance and twist to the songs and, despite being inside the darkened hull of the boat, it feels like summer. The recognisable “Na Na Ooh” from the album keeps the swing going. It has more life played live with room to reverberate. There’s an echoing crescendo before the music rolls back to the bouncy Ska beat that continues in “Mr Happy”. Songs like “Mrs #1” have a similar swell and many tracks bow out nicely with a toot on the trumpet and a bang on the drum. There are times, particularly with the keyboard in “My My”, and the trumpet’s shining moment in “The Situation”, which make the crowd go wild and have a film noir feel. I start to understand what was meant when bass guitarist Josh Stopford referred to the music as “tarantino-esque”. There are moments when the guitar twang takes the lead, and there are rockier moments that allow some younger crowd members to head bang, but never for long. Some of the biggest crowd reaction comes with album title track “Desperation State” and “I’m not Guilty”. Matt asks the crowd to: “Do me a favour and sing this with me.” He doesn’t need to ask twice. An old song of theirs, “Tonight,” gets people clapping along. It has an amped up guitar and deeper vocals. The railings are shaking as people can’t help but tap along with the drum and trumpet combination. Yes Sir Boss return to this vibe in the new songs they play. “Found A Cure” goes down tremendously even though it is still being worked on. Apparently they: “have loads more songs that aren’t quite ready yet, we wish we could play them for you but we can’t.” The brass section, also known as Tom First and Jehan Abdel-Malak, are an amazing team. They move around each other with ease and perform occasional flourishes together. The six band members all take a slightly different approach to the performance. Super smiley guitarist Luke Potter bounces with his legs pinned together most of the time, whereas bass guitarist Josh Stopford moves around rocking out, and Reuben Nimmo holds it together on drums. The performance is showiest nearing the end of the set when the sound turns almost circus like. I wouldn’t have been surprised if someone had come out on a unicycle juggling. Tom and Jehan dance back and forth and give a little spin. Then the whole band freeze frame and move and stop with blasts of music. At the encore Matt says it’s time to: “put your knees up and have a proper fookin’ dance.” The crowd are fully into it and take over the singing in “Never Know”. The band “Bloody love it” and Luke thanks the crowd for making them “So damn welcome.” I’d say a good time was had by all. To find out more about Yes Sir Boss visit their official website You can find out more about Thekla and check out their upcoming gigs on the venue’s website
Follow @Thefixmag
Recent Posts
We Like You…