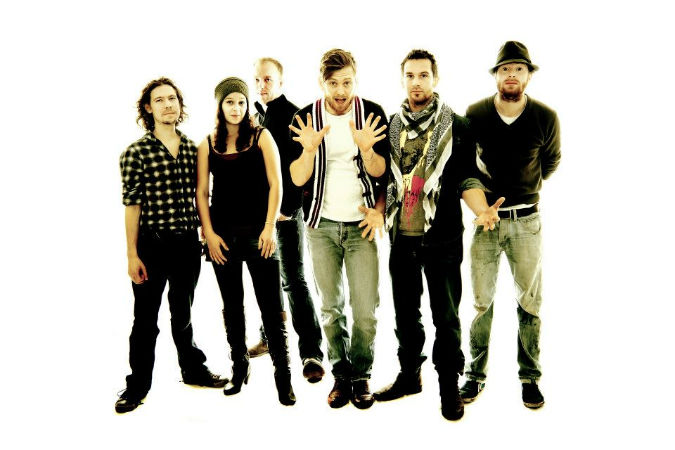 Following their rip-roaring performance at Glastonbury’s King Arthur’s Hall on Friday 19th April, The Fix’s Brigitte Nicolas followed up with Josh Stopford, bass guitarist in Yes Sir Boss, who return to their home city of Bristol for a gig at the fantastic Thekla on Saturday 27th April. Without further ado, here’s what Josh had to say…. Your music seems to cover a lot of genres from rock to blues, how would you describe your sound? I never know how to describe it. It’s got the Rock and the Balkan, it’s a big old Mish Mash really. We just play what we feel. Your album is mostly upbeat and fun, would you say that reflects you as band?  Well, we can’t be upbeat all the time but we do have a laugh. We wrote a lot of the songs on ‘Desperation State’ when we were at university, so it captures that rambunctious spirit. Our music has grown with us as we’ve got older. The songs we are writing now are a bit more dramatic and a bit rockier. There’s less of the Ska influence, but the horn section still shines through. What was it like being the first act to be signed on Joss Stone’s label Stone’d Records and working with her on your new single “Mrs #1”? It has been great. She came to visit us while doing the rehearsals but we have been given pretty much free reign in making the music. It wasn’t until we had finished recording the album and had a version of “Mrs #1” recorded that she added her vocals. The song worked really well with her voice. Were you inspired by her at all? I had seen Joss Stone working before and she is pretty quick. She’s very professional and can just, wham bam, get things done. We can be a bit of a six headed monster sometimes and are very fussy. Of course it’s different because she is a solo artist and we are a band. We have to be diplomatic and try and function as one, but we’ve each got our different parts to play. You underwent a 150 date UK & European tour last year. That must have been exhausting?! I think we paid our musical dues last year; we got through a lot of that 10,000 hours experience you are supposed to need to be a success. Sometimes it’s hard to remember anything at all. I remember being on stage, and I remember drinking too much… What were the highlights?  The Sundance Festival was pretty fantastic. Germany was also great. It was quite a refreshing change. They have a different attitude to music there. They really listen and it makes us work harder. Your album ‘Desperation State’ was released in October, are you pleased with how it’s done so far? It’s hard to know how well it’s done in terms of sales but we are happy with the way the fans have reacted. They are pleased to be able to listen to the music without having to come out and see us. Plus we have got a lot more people turning up to gigs knowing all the words. You recently played The King Arthur in Glastonbury what did you think of that? It was such a fun night. The support band All Us Authors were great. They played a brilliant set and then during our set they were singing along with our songs and crowd surfing! You’re based in Bristol, what do you like about Thekla that made you chose it for your gig there this Saturday? It’s on a boat! That’s pretty great. It’s got a wicked sound and I love that it’s steel and industrial inside. What can the audience expect from the gig in Bristol? Are there any special surprises up your sleeve for the home crowd? We’ve got a few new songs but I won’t tell you more than that, it would spoil the surprise. How do you choose the support bands? The Intermission Project will be at Thekla and they were booked by the venue. Other times we tend to get our mates in. We support them when they’re here and they support us when we are in their hometown. It’s a nice relationship to have, you end up sharing fans. What other bands or artists are you listening to that you would recommend? I just got Spotify so I am listening to lots of different bands on there. Timba Tomba is brilliant. I am always listening to Beruit. There’s also Bonnie ‘Prince’ Billy who are a bit rough round the edges, and Father John Misty, who use to play drums in Fleet Foxes. What else does Yes Sir Boss have planned for the rest of the year? Our focus is on breaking on to Europe. We won’t be doing as many UK gigs, but the ones we do plan we will make really great. We are also writing quite a lot of good songs as we tour. We want to keep the momentum going and definitely want to have a new album out by next spring. To find out more about Yes Sir Boss visit their official website and to buy tickets for their gig at Thekla, as well as seeing other gig listings for the venue visit www.theklabristol.co.uk You can read our review of Yes Sir Boss’s performance at King Arthur’s Hall in Glastonbury here
Follow @Thefixmag
Recent Posts
We Like You…