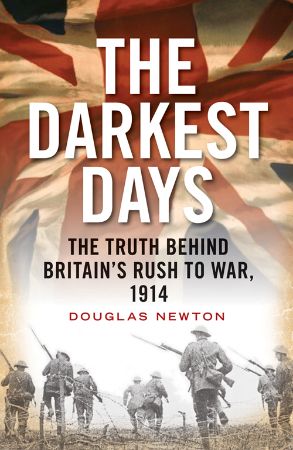 With it being the centenary of the outbreak of World War 1, 2014 has seen the release of an overwhelming multitude of books about the Great War; in fact director of Bristol Festival Ideas Andrew Kelly, as he sits down with Australian historian Douglas Newton, informs us that there could easily have been hundreds of similar events with an author discussing their thoughts on the world’s first global conflict. However, Newton’s ‘The Darkest Days: The Truth Behind Britain’s Rush To War, 1914’ particularly impressed with the new light it casts on the pre-war crisis and Britain’s subsequent declaration of war with Germany on 4th August 1914.

Newton begins by revealing that his research of other writers and commentators regarding this issue had left him “stunned” and that the notion of Britain helplessly entering the conflict when nothing else could be done is a myth that has been perpetuated ever since. He punctures the fantasy that Britain “struggled to avoid” war and repudiates any parallels to Britain’s position in declaring war on Nazi Germany in September 1939. Newton argues that a war resulting in the death of 17.8 million people was surely not the formality that has been propagated and he reveals how elements within the cabinet were so enraged by Britain being frogmarched to war that four ministers resigned from office and, on the eve of war, the British government very nearly collapsed.

One of the main misconceptions regarding Britain’s entry into war is that it was the result of Germany’s invasion of Belgium on 4th August. While the violation of Belgium’s neutrality was an extremely helpful excuse for the war cabinet to accrue broad support for British intervention, Britain were effectively already committed to a “war of entente solidarity” with allies France and Russia. Newton describes the arrangement as a “pogram to orchestrate war” and, rather than a morally righteous move to protect Belgium from German aggression, Britain’s entry into the conflict arose a full two days before a German ultimatum to Brussels in the form of promises to provide naval support to France. Essentially, Britain’s commitment to the entente against Germany led to a somewhat dubious policy of selective despotism to protect the interests of its empire: Britain’s policies were geared towards underpinning either French or Tsarist imperialism above any kind of imperialism from Germany.

In contrary to his admittedly justified standing as a great leader of World War Two, Newton describes Winston Churchill becoming 1st Lord of the Admiralty in 1911 and, from then on, becoming somewhat “trigger happy.” Employing tough rhetoric and placing his navy at an increased state of readiness for conflict, Churchill made escalating steps as the global potential for war heightened at the end of July 1914; a further aggressive decision was made to deploy the fleet for war stations on 28th July and, a day later, a warning telegram was sent out across the British Empire; all this a week before German troops entered Belgium.

Newton argues that notions of a British desire for war, within both the government and a considerable portion of the British public, is something that requires correction. On 2nd August, eminent members of the government including Prime Minister Asquith, Churchill and foreign secretary Edward Grey threatened to walk unless their cabinet voted to pledge naval support to France; support for the pledge was passed by just a single vote. Furthermore, Newton describes correspondences from both Grey and Churchill admitting to ¾ of MPs opposing intervention in the weeks leading up to 4th August.

Though there was considerable public opposition to war, the speed with which a mere four influential men within the war cabinet (Asquith, Grey, Churchill and 1st Viscount Richard Haldane) propelled the country towards conflict allowed the public just one weekend to form any protests. Though the protests that occurred exceeded those of the not inconsiderable suffragette marches, the decisions had been made before any overwhelming public demonstrations could take place. The clamour for war perpetuated by the Tory aligned newspapers should also be noted; peddling nationalistically proud assertions that with France and Russian on our side it was time to crush our German Nemesis, the press were complicit in casting the image of a war of moral righteousness.

Speaking for around 50 minutes and then taking questions from the audience, Newton has provided some enlightening revelations and, while not a complete denunciation of British policy in 1914, they are extremely important in bursting a simplistic, nuance-free fairy tale of Britain’s moral superiority regarding its part in the great conflict.