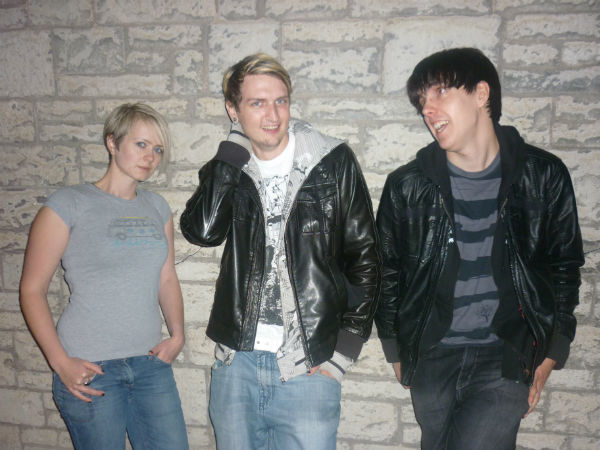 2013 marked the beginning of a new era for Domino Fire, a 3 piece pop-rock band from Street who recently shelved their former identity of The What Now? Kids. Recording with Dare Mason at The V.I.P. Lounge in Penzance, they are now hitting the local gig scene in support of their demo EP ‘Illusion Of Choice’ which has provided the launchpad for them to pursue their musical ambitions. Ahead of gigs at The Riflemans in Glastonbury tonight and The Working Mens Club in nearby Pilton later in April, lead vocalist Jon Coyne spoke with The Fix to reflect on the rebrand, the music and the band they tip to do big things. If you had to pitch your brand of music to a punter what would you say? That’s a difficult one… We generally tend to go by what other people have labelled us, which seems to be somewhere in the ‘pop/rock/punk/grunge’ area. I don’t know how others would class it, but that’s OK for us for now! Many people will know of your work as the What Now? Kids – Why the rebrand? When we started, the name was good, but since then we’ve grown, as a band, musically and in our personal lives. We wanted to be taken more seriously as a band, so decided on a name change. The idea of decisions and consequences kept popping up in our discussions, so we eventually, after a long and arduous process, settled on Domino Fire. Essentially, the decisions we make today burn through time… Or something like that! When, how and why did you decide to start a band together? Rob (Hayden) and myself had been in bands together before, but they were always led by someone else, so we wanted to start a band on equal footing. We knew that Vin (Venetia Morris) had started drumming, so at some point in 2011 we put the idea forward to her and it took off from there. Which artists, if any, would you say influence Domino Fire as a band? This is a loaded question as our musical tastes are quite diverse. I listen to a lot of screamo and pop-punk, Rob listens to a lot of metal and punk and Vin listens to a lot of indie and powerpop. We’ve been likened to Placebo, Motion City Soundtrack and Queens Of The Stone Age if that helps… You have the gig at The Riflemans in Glastonbury tonight. What can audiences expect and what can you tell us about the support act? Do you have any other gigs lined up? Well, we have a couple of things we do, we tend to do songs at people, and we like to joke around, if people come away from our gigs having laughed and nodded their heads to the beat, we’re happy! The support, A Life In Orange, are an amazing band, we’ve played with them before, and they have a great sound. Coming up soon we have a gig at the Pilton Working Mens Club on the 13th of April with Nothing Yet, and we’re playing in Bristol at The Exchange on the 12th of May. 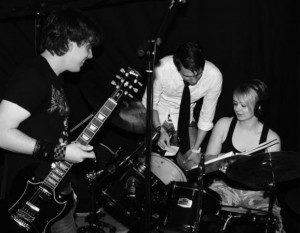 What are your thoughts on the local music scene at the moment? Are there any other local bands you enjoy watching? The music scene around here is great, so many good things are coming out of it! We have close ties to Flipron, My Story and Nick Parker, but there’s so many more! All Us Authors are probably the band to watch out for in the future, expect big things from them! And who out of the more ‘established’ bracket excites you at present? This is where it gets tricky! I think that there are so many amazing bands out there, it’s difficult to pick out just a few! Finally, what has been the highlight for you as a band? So far, that would have to be winning our heat at the Alive Studios Battle Of The Bands in Wadebridge, Cornwall. We had some stiff competition, but managed to pull through and win the judges over! We’re looking forward to playing our first hometown gig though, with hopefully many more to come! Find out more about Domino Fire: www.facebook.com/dominofiretheband www.dominofiretheband.weebly.com www.twitter.com/Domino_Fire www.soundcloud.com/dominofire
Follow @Thefixmag
Recent Posts
We Like You…