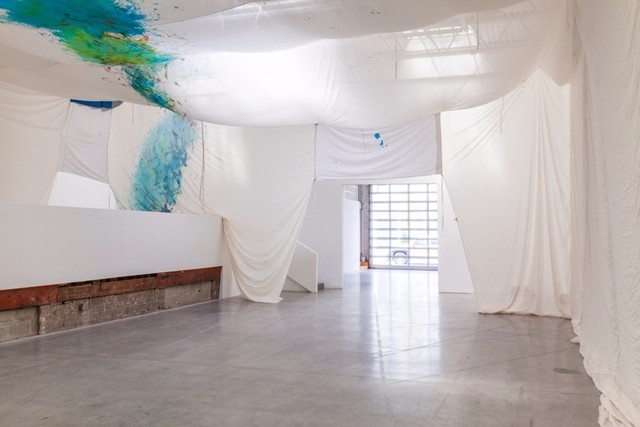 Exhibiting at Spike Island for the summer is the Berlin-based Swiss artist Reto Pulfer. Combining painting, drawing, music, found objects everyday materials, Pulfer aims to create Zustände, mental and conceptual states, ‘total artworks’ to be experienced by visitors to his exhibitions, which are not necessarily confined to conventional galleries.

For his Spike Island exhibition, Pulfer has created three separate spaces. Firstly, there is a series of maps, large pencil and watercolour pieces of places he has lived or travelled to. The maps defy perspective and proportion, a callback to the distorted nature of conventional maps, which Arno Peters so ably combatted with the Gall Orthographic Projection. Taipai becomes a swamp with ‘FISH’ written off the coast, while his birthplace Bern resembles a Moroccan desert, complete with Atlas Mountains in the distance, and is scribbled with dates. Singapore captures the stale, clinical state of the commercial hub, while in Venice the island’s north and south are inverted. What comes across is a childlike innocence borne from the intentionally rudimentary watercolours, which are more akin to school yard treasure maps than cartography.

Youthful vigour also characterises the second space, containing Methoden und Spieletisch, a collection of 44 artworks dating back from 1988. The collection would fit neatly into the Museum of Everything, which is apt considering Pulfer’s outsider status as a self-taught artist. A small rudimentary clay sofa with ‘Poête’ inscribed in it is juxtaposed with frantically screwed plywood. The array of batteries, lego figures, childhood games, wooden blocks, broken glass and more amount to everything and nothing depending on one’s perspective. Most intriguing of all is the maths book from the 1980s with a secret space carved into it’s pages. Hanging above the collection is Die Gleichmässige Verteilung der Sterne in der Milchstrasse, a Milky Way of ink spurts on a bed sheet, a sparse Jackson Pollock.

What really makes Pulfer’s show worth seeing though, is his project for Spike Island Gewässerzeiten, a German wordplay translating roughly as ‘water-times’. Bed sheets are hoisted like sails above a floor littered with an array of material – velvet, tin can, string and silt sourced from the river outside the gallery, mud which to some extent looks as moist as when it was freshly lifted from the bed. Somehow the floored objects are given a strange density, the tin can becoming an immoveable mass when daintily coiled by string.

The result could be a child’s den or the scene of some terrible disaster, and the effect is magical, melancholic, beautiful and dangerous all at once. The space is one that could be absorbed in seconds or enjoyed for hours. A haunting guitar soundtrack composed by Pulfer is inseparable from the physical piece, creating a stoned atmosphere where the viewer can get lost in the drawings on the bed sheets above, which lie somewhere between cave paintings and engineering diagrams. Ribbons hanging down recall the constellations present in his Milky Way piece, and a version of his previously exhibited tent, Ende-der-Welt-Kammer (End of the World Chamber), is present. This is a superb use of Spike Island’s outstanding central room, a multi-sensory subtle experience where a hanging thread can brush one’s ear and a bell is hung tantalisingly high to ring.