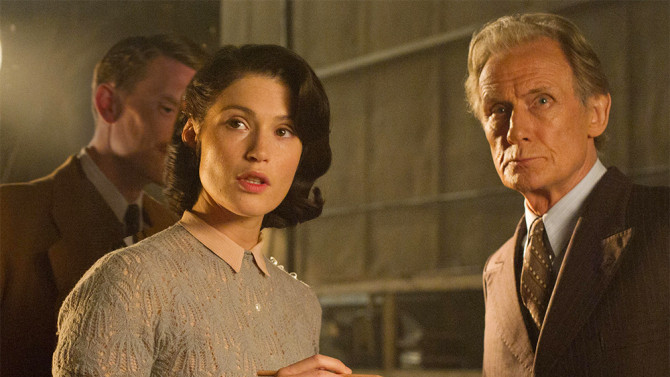 Their Finest manages to be the definition of the word fine. Performances, dialogue, story, direction, editing – it’s all fine. But only just fine. It’s okay: distinctly average in its presentation and execution. The film’s enjoyable yet also quite unmemorable. The biggest question Their Finest left me with is: Will this ever be someone’s favourite movie of all time?

Plot-wise, Their Finest actually explores a story that’s under-represented in many ways, the story of women and their place in WWII in a mainstream release and the story of women and their place within the film industry beyond the sphere of acting. We follow Catrin Cole (Gemma Arteton) who finds herself drawn into writing supporting dialogue (referred to as ‘slop’) for women characters in morale boosting short films produced by the Ministry of Information during WWII.

What follows is a promotion to writing a feature film, The Nancy Starling, based on a somewhat shakily ‘true’ story of two sisters rescuing soldiers from Dunkirk. Whilst enjoying this new job of essentially producing untruthful propaganda (a nuance that, like many other good ideas in the film, is brushed away) Mrs. Cole has to deal with her rocky relationship with cynical alcoholic co-writer Tom Buckley (Sam Claflin), her threatened and manipulative stay-at-home artist husband Ellis (Jack Huston) and aged ham actor Ambrose Hilliard (Bill Nighy whose scene stealing performance is practically criminal).

All these characters and more, coupled with the backdrop of war and filmmaking could lead have lead to either a tear-jerking melodrama or a brilliantly witty and plummy British war-time comedy. Instead it sort of misses both and ends up being rather bland. Anytime a scene or exchange of some depth or seriousness occurs, it’s mostly then undermined by a one-liner or other tonally inconsistent gag, usually delivered by Bill Nighy.

Likewise, even the story undermines itself, by occasionally moving past some rather tragic moments quickly, as if it was too embarassing to dwell upon. In the end, it leaves Their Finest as being serviceable enough as a piece of entertainment, but its seeming reluctance to actually reach some sort of true emotional connection with the viewer leaves you feeling short changed.

The film’s so middle of the road that it actually comes off as a being reminiscent of the in-film fictional production of The Nancy Starling, in that early on in the film, the producer of the picture issues a mandate that above all else, the film must ‘be authentic, optimistic, and has a dog for good measure’. While that may fly in the context of WWII and Blitz audiences needing something hopeful to look to, indeed escapism disguised as realism, Their Finest just proves to be a diligently adapted form of the source material, but put through such a safe and average filter that it comes off as a literal adaptation of the book with none of the soul that the prose presumably have.

You can’t go terribly wrong with this film however and its release amongst such films as The Boss Baby and Guardians of the Galaxy 2 means that it’ll have an audience of people simply seeking an alternative to those films. So if you’re looking for a Sunday afternoon at the cinema film that won’t particularly move you in anyway but still provides a few chuckles and some decent performances, without a giant CGI tentacle creature in it, then this is your best bet.