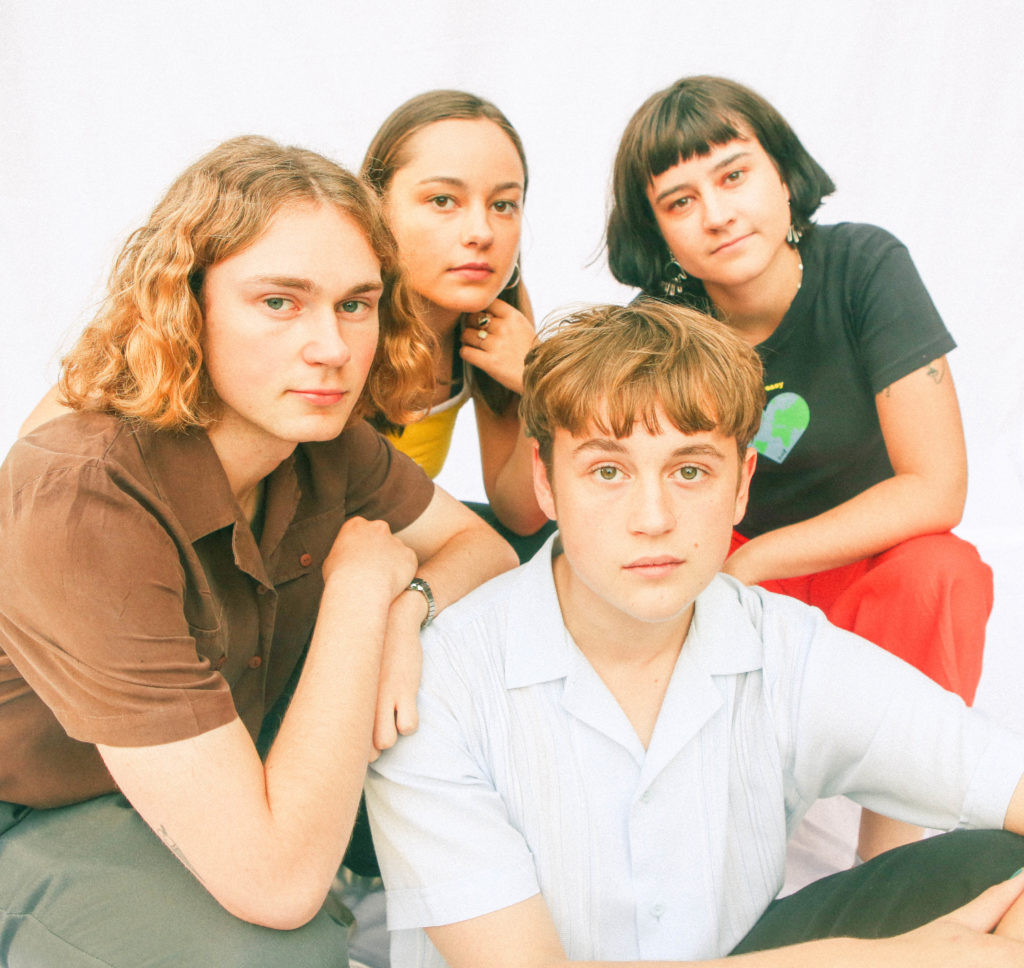 After securing a deal with Heavenly Records last year and now a smidgen over 12 months since since the release of debut album Silver Dollar Moment – a record praised as “a garage rock masterclasss” in a four star Guardian review – it must be an exciting time to be a member of The Orielles. A buzz surrounding the Halifax group is made manifest in the transferring of tonight’s venue from the smaller capacity Exchange; a pre-show predominance of teens and early twentysomethings fighting to get close to the stage is evidence that the band’s gauzy brew of surf-pop, indie disco and psychedelia has resonated with their peers.

“We’re The Orielles and we’re going to play some tunes” announces guitarist Henry Carlyle-Wade before he pogos up and down in sync with keyboardist Alex Stephens as opener ‘Old Stuff, New Glass’ explodes in an enthusiastic rush of ascending chords and toots from singer Esme Hand-Halford’s whistle. The shimmery ‘48 Percent’ boasts a joyous chorus within which one realises that Hand-Halford’s live vocal is impressively reminiscent of its recorded counterpart. It also feels genre perfect; the dreamy, tunefulness of her voice the ideal foil for The Orielles’ jangly guitar pop default.

That is not to say that the group have a single modus operandi and it would perhaps be unfair to simply label them ‘indie.’ 1960s girl groups are a consistent reference point (after all the band’s name is a partial tribute to The Shirelles) as with the soulful “Ooh Ooh Ooohs” of ‘Henry’s Pocket’. Elsewhere, the danceable ‘Blue Suitcase (Disco Wrist)’ contains Chic-like guitar interludes and ‘Bobbi’s Second World’ is perhaps closer to authentic disco than it is to indie disco. There are also elements of 90s baggy along with an admittedly aimless funk instrumental based around a repetitive bass riff and a general unexpected use – even overuse – of cowbell.

Despite still being in his teens, Carlyle-Wade is a garrulous and amusing between-song mouthpiece. Even after the opening tune, he’s chattering on about the tour being thus far a sensible affair of 1am bedtimes due to Hand-Halford (that is Esme, not to be confused with sister Sidonie on drums) suffering from illness. He thanks the audience from coming out on a Sunday “as it is the sabbath” and in response to a bellowed “Sunday Funday!” from the crowd, he offers the quick riposte “Yes that does rhyme although so does Monday but everyone’s far too depressed to enjoy themselves.” Later, in introduction to a new track, he playfully threatens anyone caught recording on their smartphones with removal from the venue.

An interesting thing about The Orielles is their idiosyncratic choice of subject matter – clearly they’re not ones for songs about love, relationships and well-worn cliché. ‘Henry’s Pocket’ is simply about a pair of trousers that Carlyle-Wade once owned while the standout singalongs ‘Let Your Dog Tooth Grow’ and ‘I Only Bought It For The Bottle’ (both inducing an animated response and a couple of audience members surmounting the shoulders of a pal) reference a Greek drama film from 2009 and the quirky observation that people will occasionally purchase a drink just for access to the receptacle containing it, respectively.

Though it might be tempting to dismissively file The Orielles away in a pigeon-hole marked “another jangly retro guitar pop with female vocals” that has swamped the musical landscape in recent years (see Vivian Girls, Best Coast, Alvvays), there’s a kooky, surreal edge to them that marks them as something slightly different.  “Baby, it’s a gas” Esme Hand-Halford sings during ‘Sunflower Seeds’ and it has been.